Frostgrave: Rumble at the Tower House 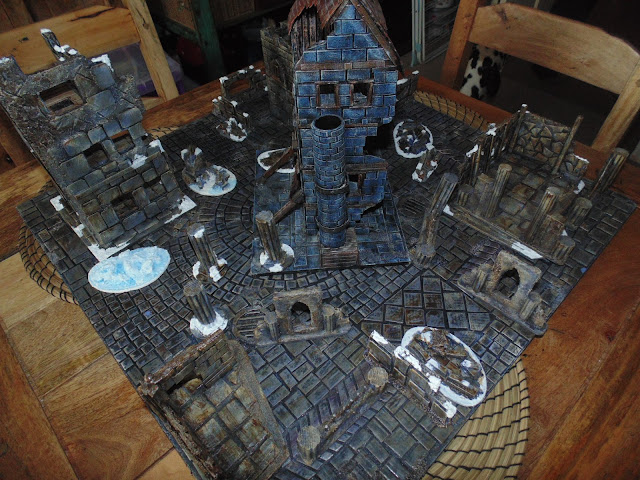 The setting, the deserted outer streets of Felstad, where the snow has melted somewhat. 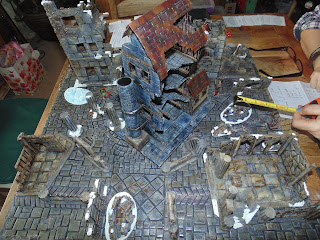 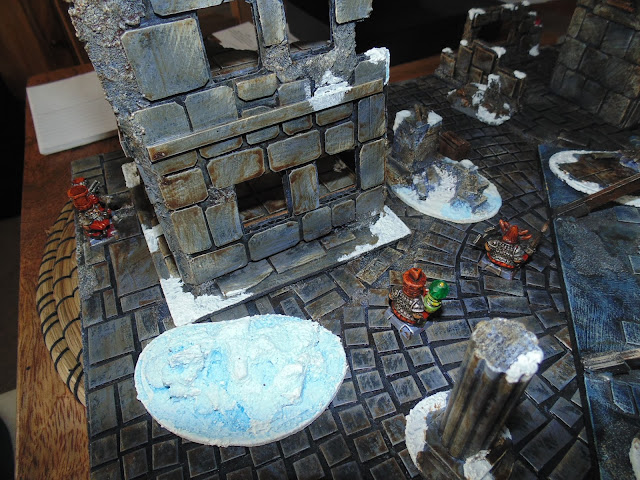 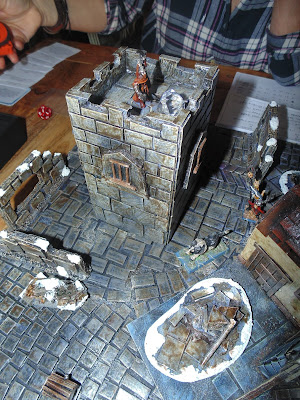 As does Serefina's, although her thief seems some how swifter and better informed than Mal's. 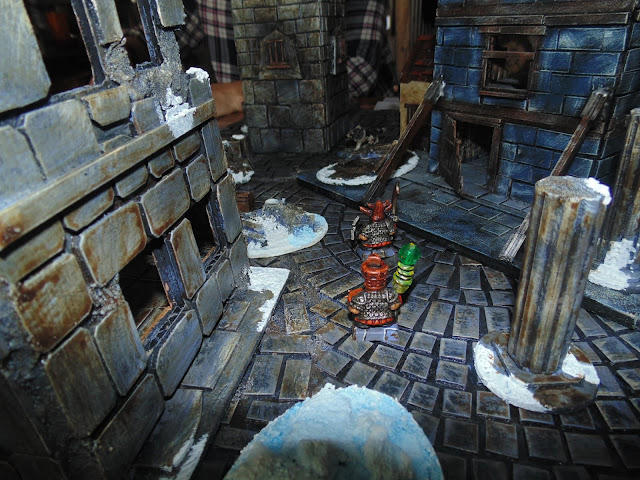 In an attempt to block the gap in the street Mal's thug runs forward to accept combat.
Mal tried to teleport himself into the toer house to get to the lootbut faile and woumded himself in the process 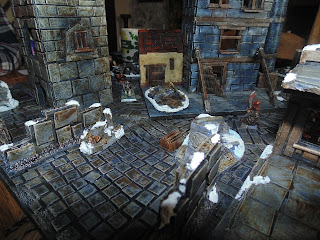 While his archer and thief move forward ready to grab some loot. 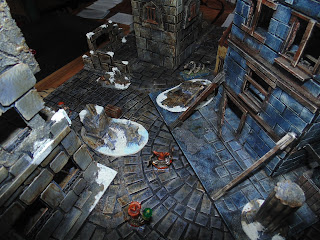 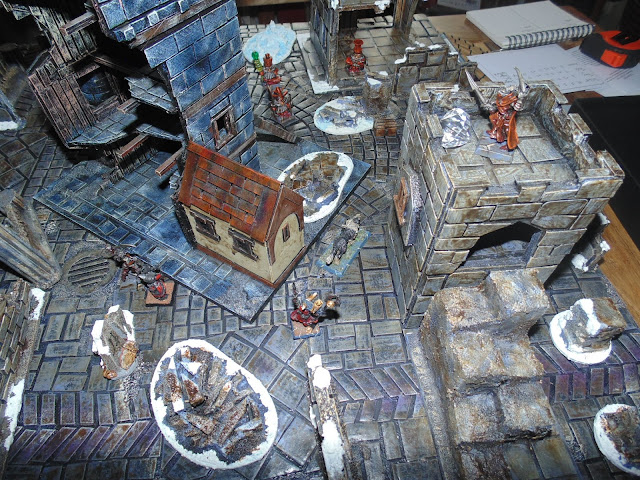 Serefina's thug and xbowman move round the left flank ready to pounce through the building. 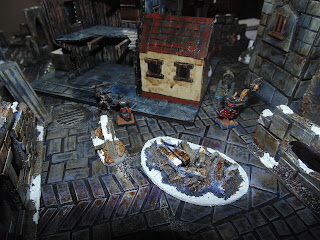 While Serefina and her warhound move between the buildings.
Serefina tried to cast Bone Dart on the thug but failed by 4 not enough to cause her harm. 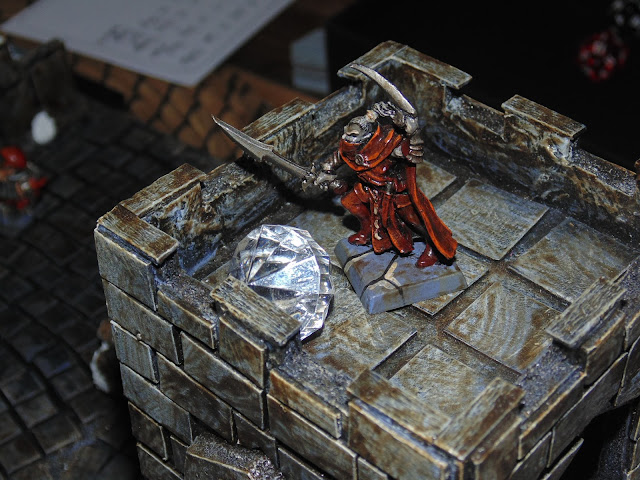 Her thief picks up the treasure. 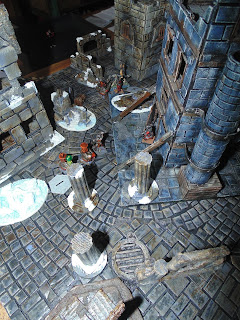 In the centre combat is first joined between the warhound and Mal's thug, and then Serefina also entered the combat. 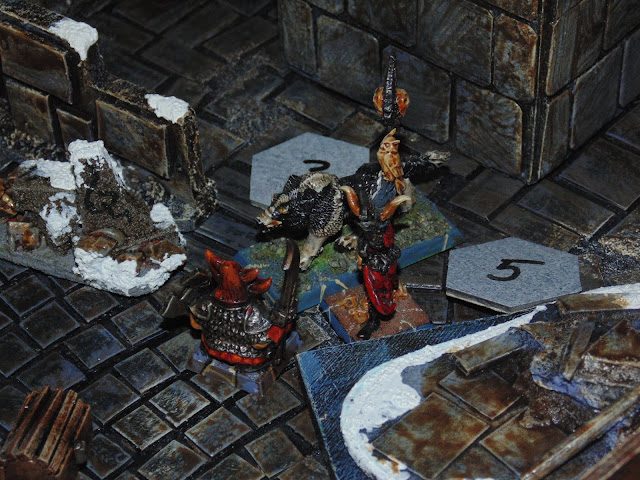 But Mal's thug managed to escape unscathed. And injured both the warhound and Serefina! 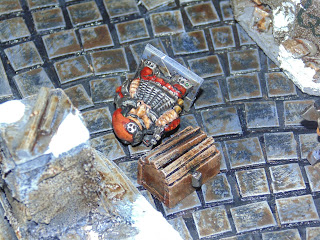 Not so Mal's thief, shot down by the xbowman from the tower doorway! 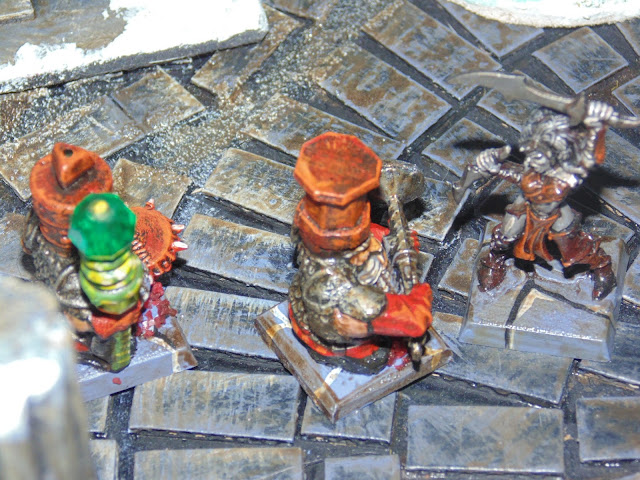 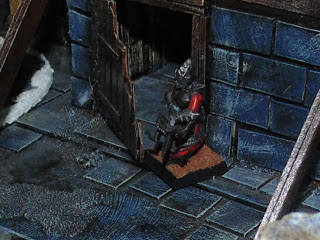 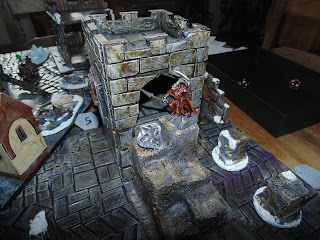 Thief on return journey, one piece of treasure in the bag. 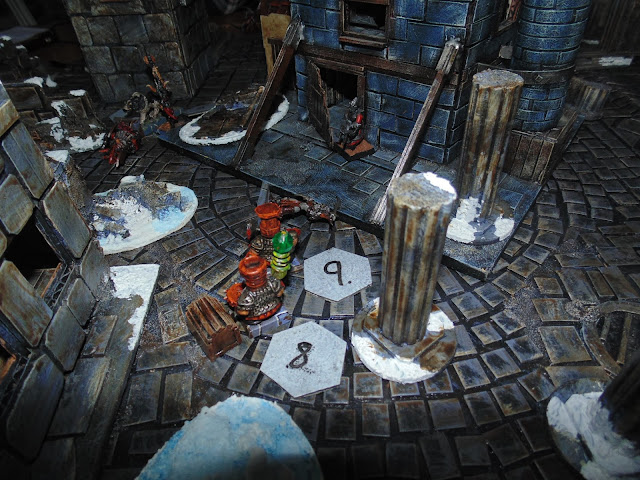 Despite recieving 9 wounds Mal's archer downs the thug, they both hit and caused the same number of wounds but the thug already had 5 wounds previously, so she died while the archer lived. 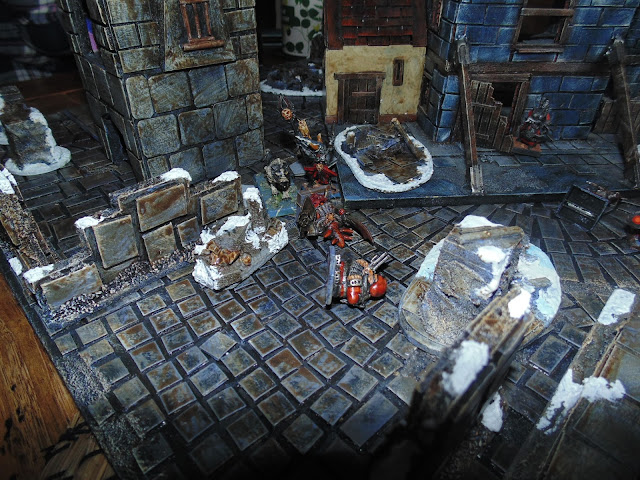 In the centre the combined efforts of Serefina and her hound dispatched Mal's thug. Mal now had 2 of his warband down and still no treasure. 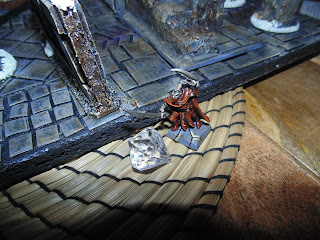 Serefina's thief exits the board with his loot. 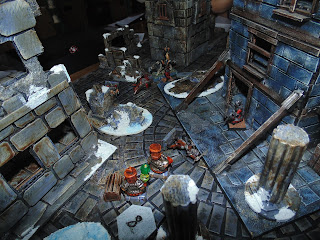 The xbowman shot and wounded adding 6 wounds to Mal's growing tally, despite being -4 to hit!.
This was shaping up as a real disaster. 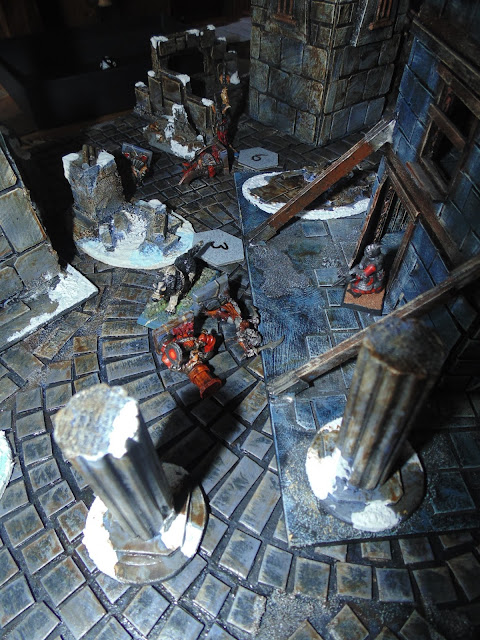 In storms the hound and downs Mal's archer leaving him all alone, what would he do? 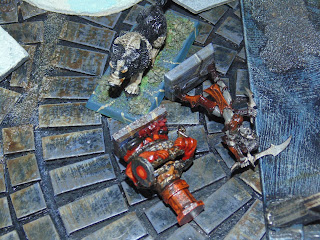 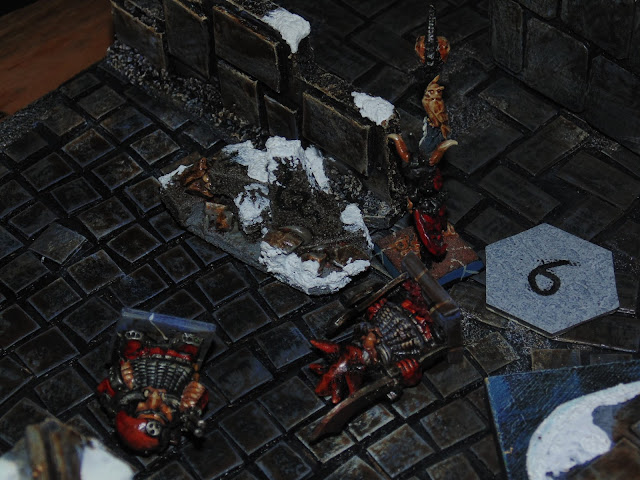 Serefina moved to be able to cast Bone Dart, but failed again. 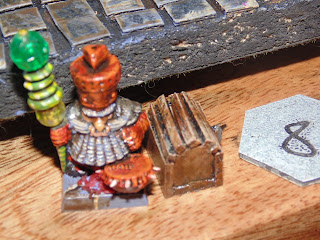 Mal managed to cast his second spell and teleported himself off the board with his treasure. 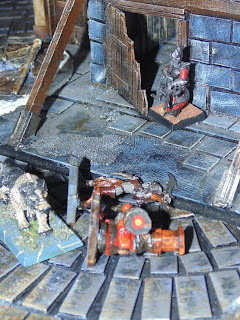 Thus ended the first confrontation between Mal and Serefina, the first of many. 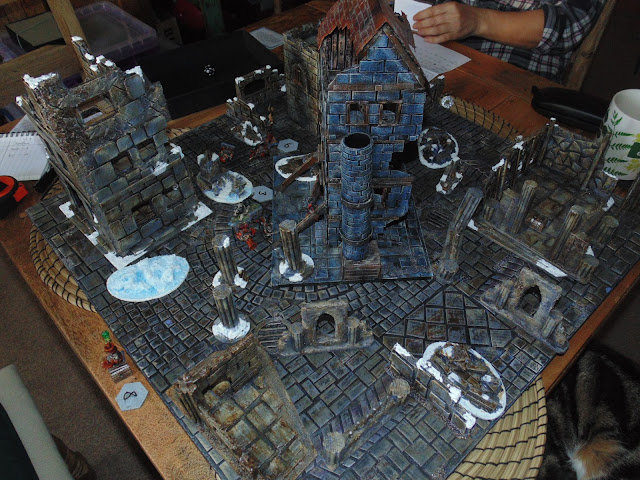 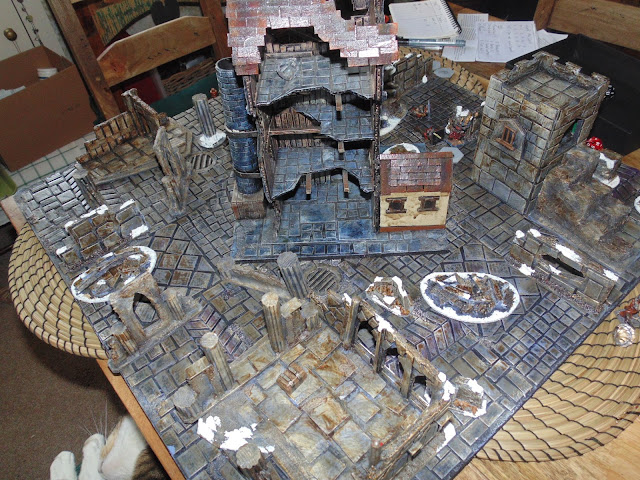 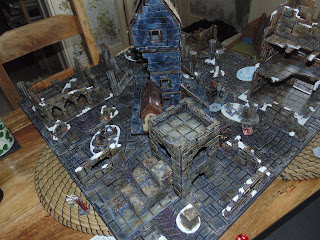 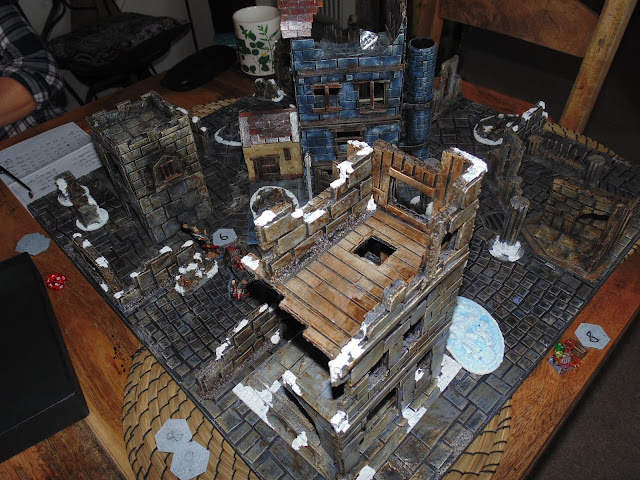 Serefina's thug survived but was injured and has to miss the next game, she recieved 150 exp and 140gc for getting three treasures of the board which turned out to be a staff with a +2 dam mod, a Staff of Casting and an Orb of power and of course she revelled greatly in the fact that she put all 3 of my soldiers out of the game.

Mal's warband suffered a right good thumping, although they did OK after they got out of Serefina's way, Mal gained 70 exp (he managed to cast 2 spells) and 80gc along with a grimoire containing the Raise Dead spell. Luckily the archer and thug survived but my thief died. However Mal decided he would hire an infantryman for the next game at the cost of 50gc leaving him 30gc left over.

Epilogue
We had a great game, Mrs Daxio picked up the play quickly and thoroughly enjoyed herself.
We will be playing again soon, thanks for reading.