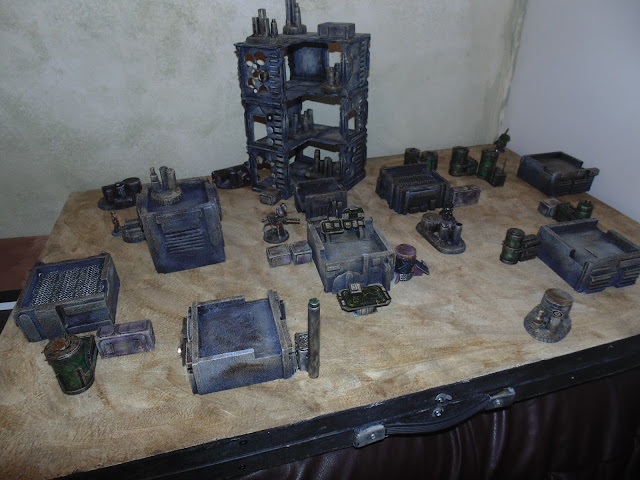 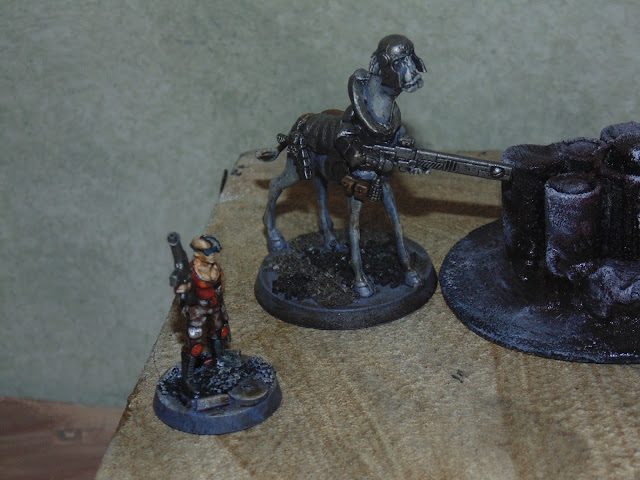 Well illnesss and other committmenns have got in the way of posting for the past few days, I played this solo game of Rogue Stars on Tuesday. So I decided to keep things easy for myself and split my Bounty Hunter crew rather than play with 2 full crews which would get fiddly. Also alows me to run a little back story about how they met. 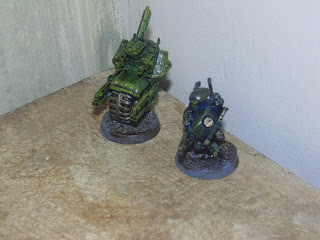 So both pairs, Trego and Jaffa, Joey and BMB are after the details of a particular Perp who is on the run having embezzled 40,000 credits from her employer. Her details she destroyed in a fire, but both pairs have got wind that there maybe some info held on an old works PC so thay have come to investigate. 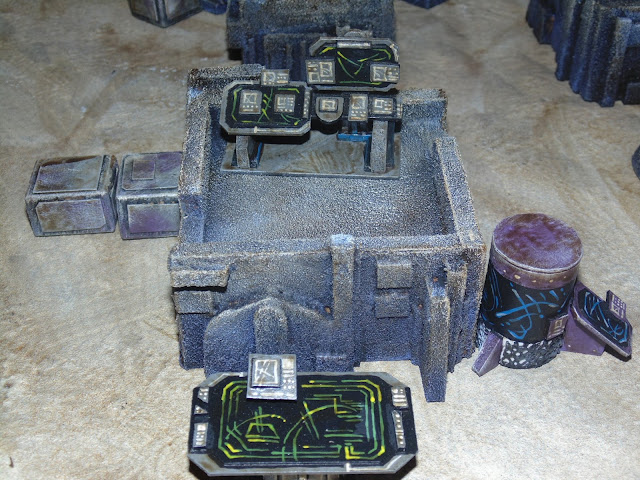 This is where the info is and so their objective for the game. I decided 2 tech rolls TN 10 would get the usefull info from the PC. 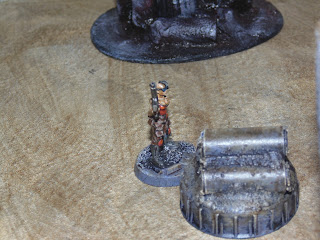 Joey and BMB won initiative, but failed 2 of their 3 rolls so Trego
got to move towards the objective at a run. 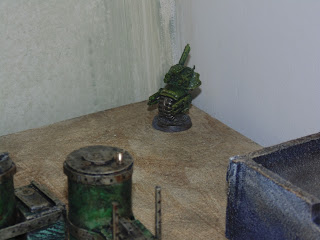 And Jaffa moved up also. 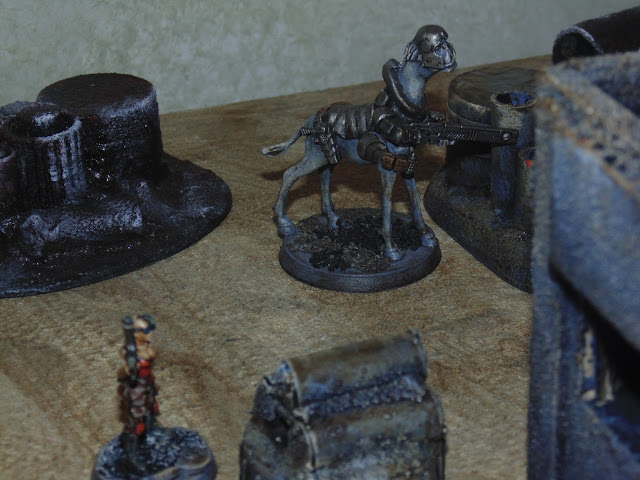 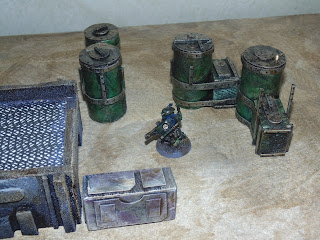 Joey, having a flight pack jumped 8" over the terrain into cover. 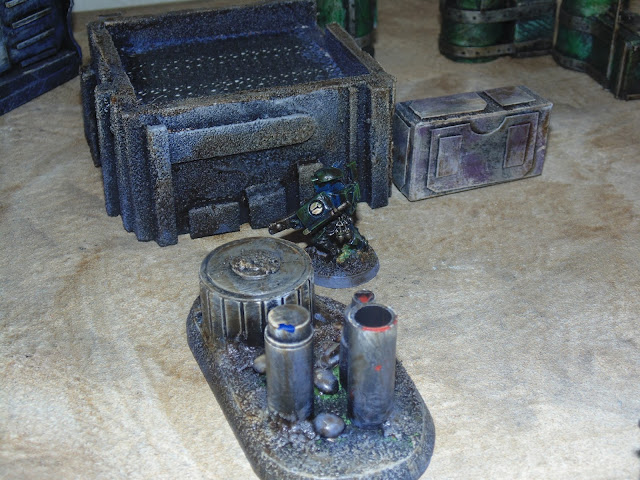 He then threw 3 dice to activate and failed 1 allowing Jaffa who has Extra Legs and Fast traits to rush towards the objective. Joey then flew into view and tried to shoot Jaffa with his monowire entangler as he wasn't expecting to see anyone else at the factory.

Joey missed then failed an activation which meant Jaffa got to shoot and miss also. 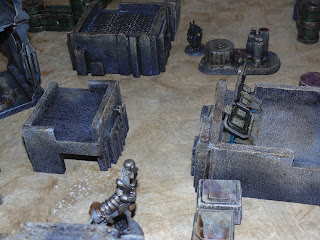 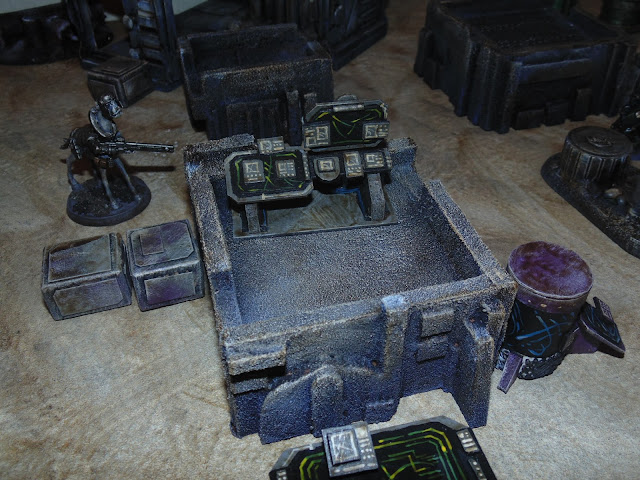 However with his remaining activation Joey entangled Jaffa, sending him crashing to the ground. 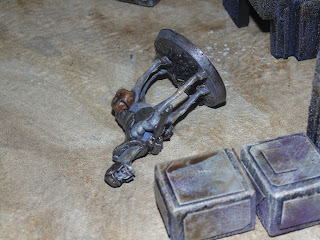 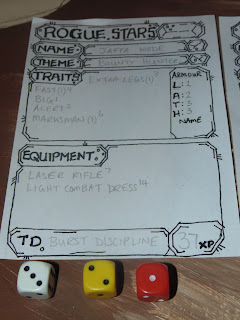 Jaffa's sheet, showing 3 stress, 2 pins and 1 wound, but more important the fact that he would remain entangled unless he had an unentangler devise, which he didn't. 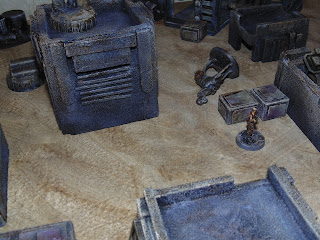 Off the main action I tried to move BMB forward for the second time to lend Joey some support and the only succeeded in giving Trego 2 actions which she passed and used to sprint towards the objective. 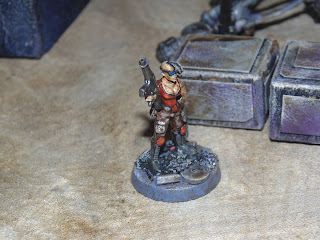 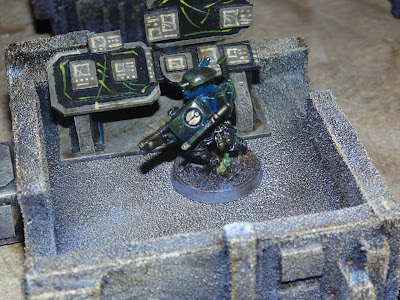 Joey gained the objective but failed 2 actions so could do nothing with terminal. 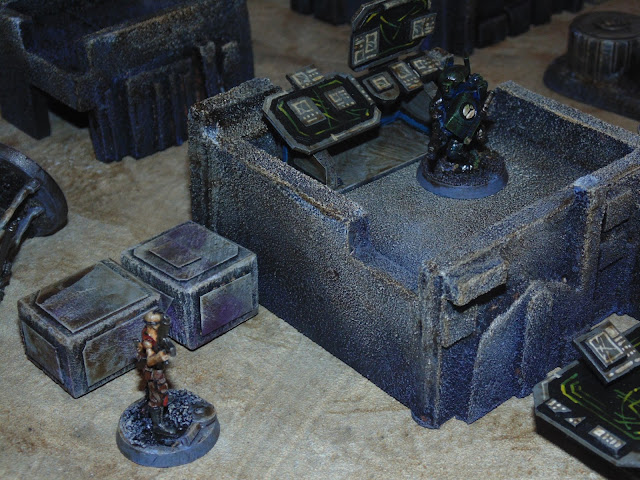 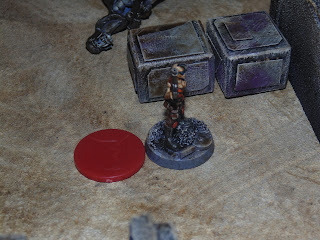 Trego, ended up being a sitting duck, ( red marker) critical fail on 1 reaction roll and here I think I played it wrong, I decided she should loose her 2nd reaction but infact I think the 2nd action should have got rid of the sitting duck situation, but there you go. 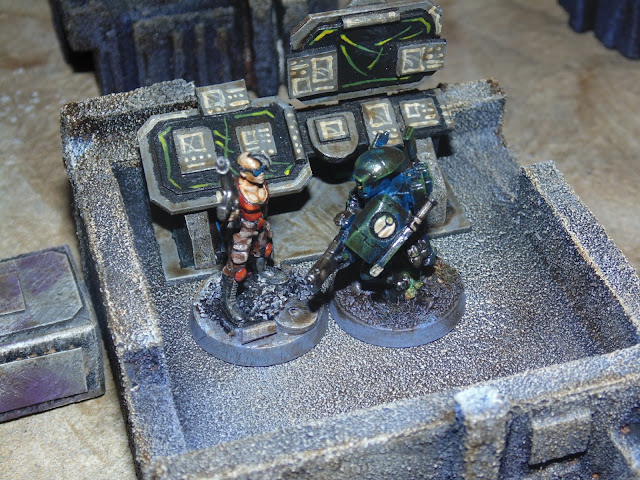 Joey fails 2 activations and Trego reacts well moving into combat but then failing to hit with her Vibrosword. 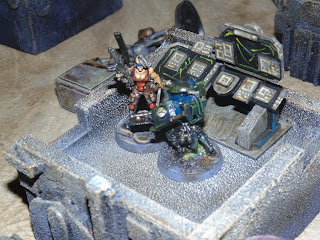 Joey gets 2 actions but gives Trego a reaction and this time she connects and Staggers him. 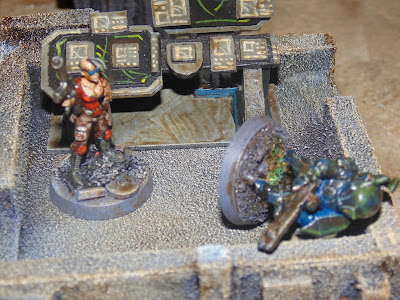 At this point my brain was mush and it seemed a fitting place to call the game. Trego went on to pass the 2 tech 10 rolls and got the info. She gathered up her pall Jaffa and left the scene.
BMB -Rover came to Joey's aid and the pair took off with revenge in mind no doubt. 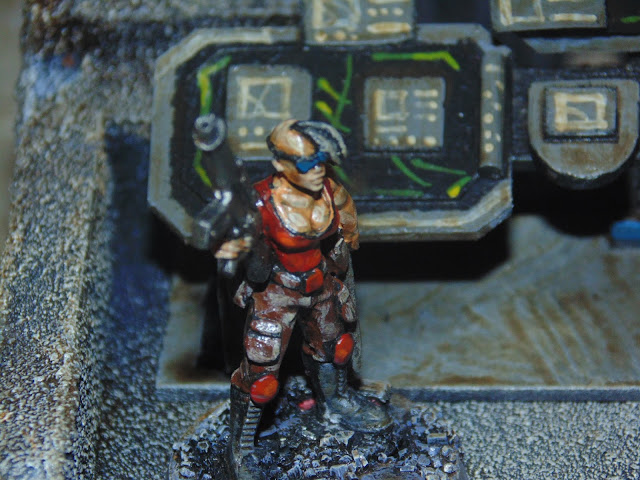 Well the first thing to point out is that Rogue Stars is not meant to be played as a solo game, it did fry my brain a bit, but then I'm ill and stupid.

It was a strange game because of the actions and reactions aspect of the rules. I think with 2 people playing the initiative may swop more often with aggressive play. For me playing solo, leaving the  initiative with one side helped , although stress began to get difficult to deal with.

I felt like there was a lot of missing rolls and failures, which was slightly negative. It also felt to me that the teams worked as individuals and weren't a team, it was easy for BMB to get left behing while Joey did the business.

However this was just my first game and I will be giving it a 2nd and probably 3rd go before I pass any judgements or made any real conclusions.

I made a film as well as took pictures, just on my phone, with commentary, which I may post. There is more detail there but less quality, and also my ill voice mumbles a bit.