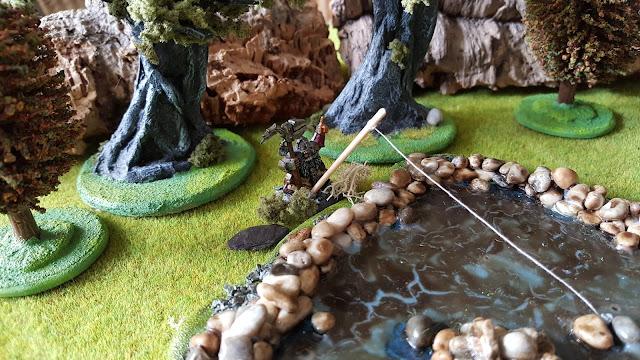 There was once a dwarf who made his living as a fisherman. Now, as you'll know, dwarves are always the best in the world at their chosen profession, and this dwarf was no exception. Every day, he brought in a huge haul of fresh fish, and he soon became very wealthy indeed. However, like any successful dwarf, he had a great many enemies. So as not to forget any, he sensibly wrote down all of his grudges and grievances in a great, heavy ledger, which he called his 'grudge book'.

One day, while out fishing in his boat, the fisherman caught a magic fish. He plucked it from the net, and before he could sling it into his basket, the fish cried out:

"Oh, fisherman fine
My life is thine
Show mercy
Spare this skin of mine!"

The fisherman caught fish every single day of his life, but he had never before encountered one that talked, let alone one that rhymed. Intrigued, he asked the fish;

"How will you repay me if I spare your life, fish?"

"If you'll release me from your hold
No more shall you want for gold."

"I don't want for gold now. I'm quite wealthy already, and I grow wealthier each day. Try again, fish."

The fish gulped, and spoke again:

"Release me back into the sea
And all my kind will flock to thee."

"Your kind already do flock to me, little fish. Haven't you heard? I'm the greatest fisherman on my island, and the fishermen of my island are the greatest in the world. One last chance."

Panicking now, the fish cast its eye over the fisherman's little boat, and then said:

"Spare me from the butcher's hook
And I'll replace that heavy book!"

This last offer puzzled the fisherman. The fish explained that if he spared its life, it would memorise each one of his grudges and grievances for him, so he'd have no need of a big heavy book.

The fisherman thought about the fish's offer. The book was very heavy, for he had a great many grudges to remember. His boat was only small, and lately he had begun to notice it sat awfully low in the water, most likely thanks to the weight of the book. Reasoning that without the book he'd have room on board for a bigger catch, he decided to take the fish up on its offer. So, he slipped it into his pocket, and sailed back to shore.

The next few years were good to the fisherman. The fish kept its word, and remembered all of his grudges for him. Without the book weighing down his boat, the fisherman was able to bring in an even bigger haul, and he grew wealthier than ever before.

One day at sundown, the fisherman was reeling in his net after a long and fruitful day's work, when the fish cried out from his pocket:

"Behold, I say, look overboard
That there's the one who stole your hoard!"

The fisherman peered over the edge of his boat, and true enough, beneath the surface of the water was a proud-looking dwarf, smiling and dressed in finery the likes of which the fisherman had become inclined to adorn himself with. The fisherman couldn't remember having been robbed, but he had no book to consult, and the other dwarf's garments and trappings seemed far too similar to his own to be a coincidence. So, filled with rage, the fisherman threw himself down upon the other dwarf faster and harder than a blacksmith's hammer. As soon as he hit the surface of the water, the magic fish darted out from his pocket and vanished, as did the image of the other dwarf. Just as the fisherman realised his mistake, all the fish in the sea flocked to him to nibble and gnaw the flesh from his bones, and he never wanted for gold again. 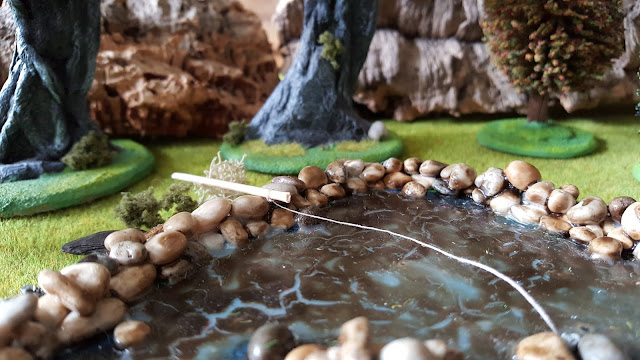 Edit: Yes I am aware there should be a boat.... sorry Tom, one can only question my commitment.
Posted by Darryl Hunt at 01:15