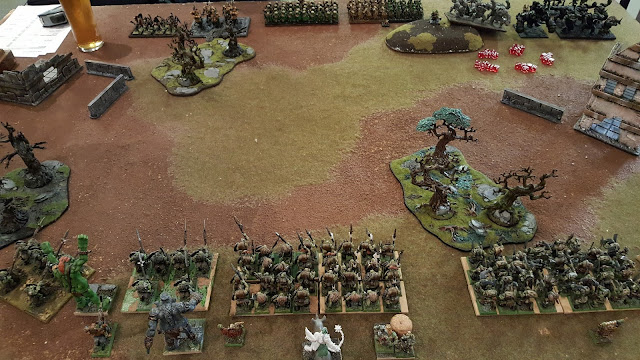 A little over a week ago me and Steve got together at Wakefield Warriors Games club to play Kings of War.

I had been working to bring my Orcs together and he had been bringing new units into his Abyssal Dwarves army. It was a 2000 point battle. 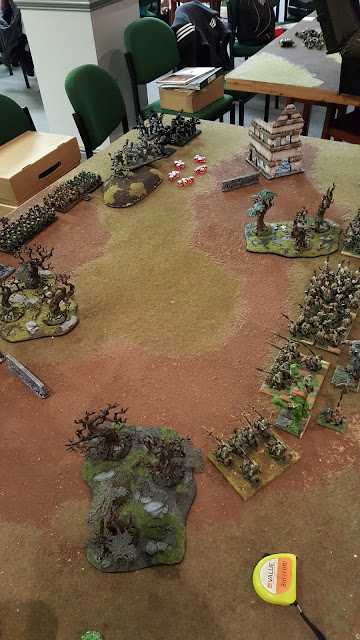 So many of the troops you might see are not painted, heavens, so sorry for that :-)

I was keen to post another game of KOW as I've been playing lots of Frostgrave recently. 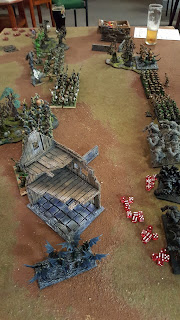 Both the armies moved towards each other jockeying for positions. 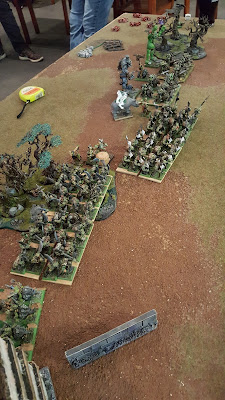 The woods broke my battle line. 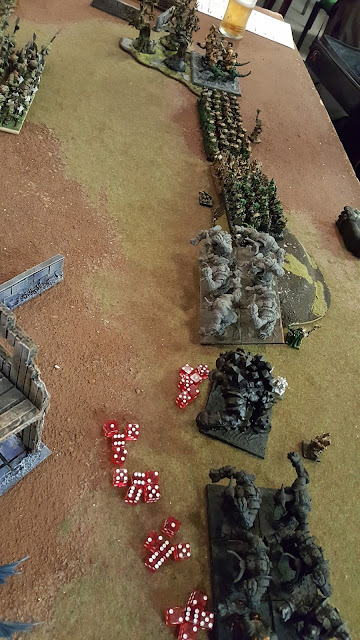 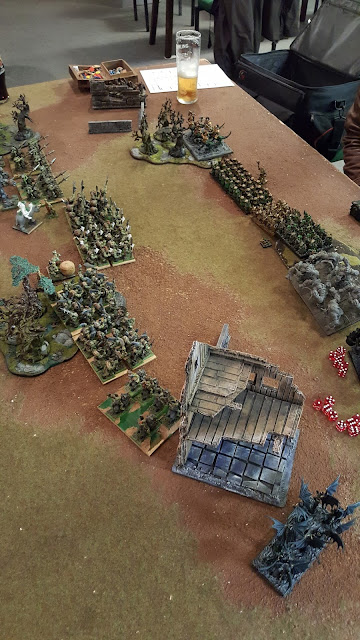 I will spoil this a bit by saying that I lost this game on the flanks. Good play from Steve and an even better deployment. He had his Golems as you can see on this end, my right flank who worked well round the building. At the far end his Grotesques threatened very nicely there too. 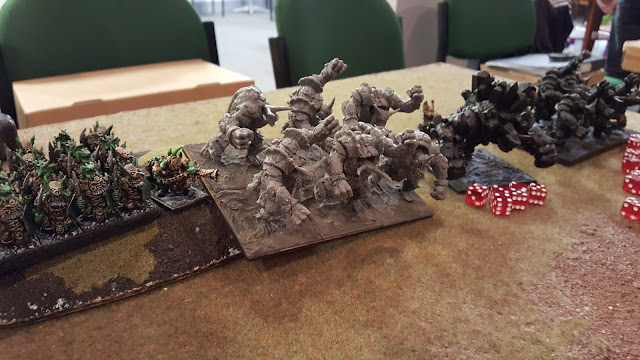 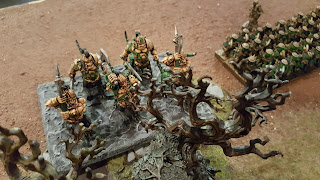 The Gargoyles worried me at first but were not too much of a problem. 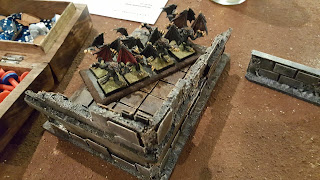 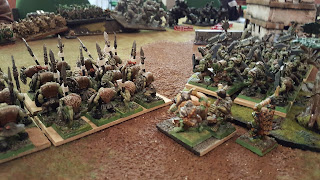 Getting close now, look at the position of my Giants, because they were poorly deployed they both got badly thumped. 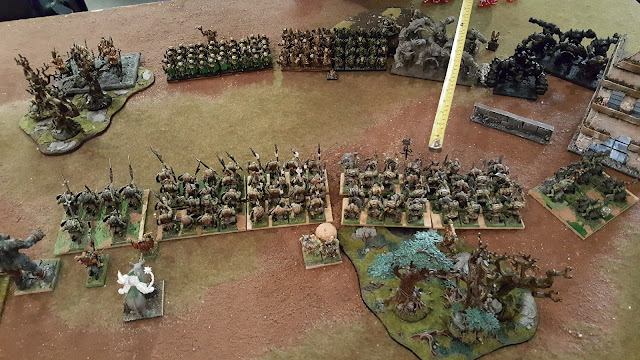 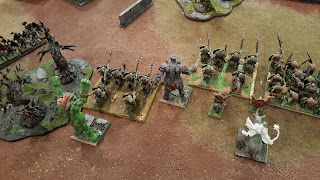 Steve's Gargoyles threaten the rear of my Gore Riders. 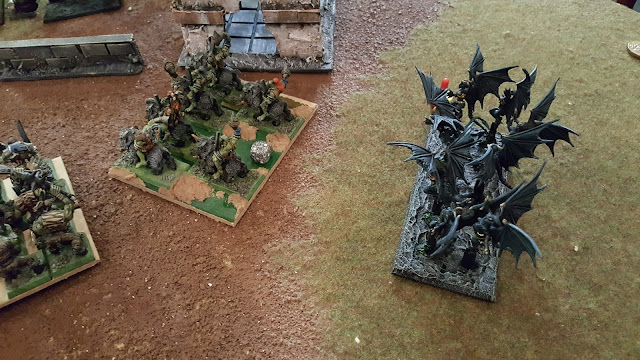 So when combat was joined it was on mass. I was using a War drum for the first time which gives +2 to both waver and rout values. I hoped this would bolster the Orc line. 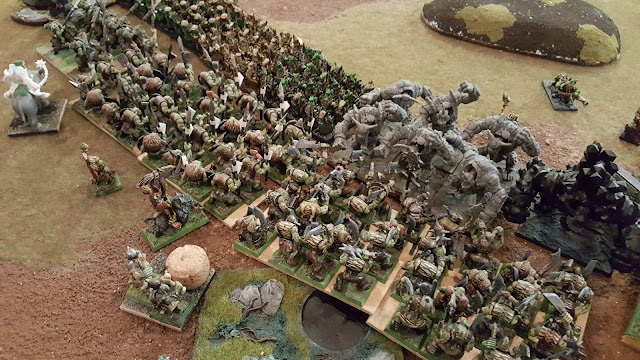 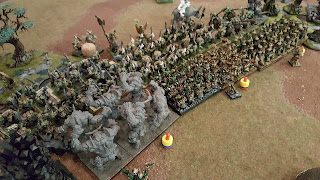 The scene from Steve's end, so to speak. 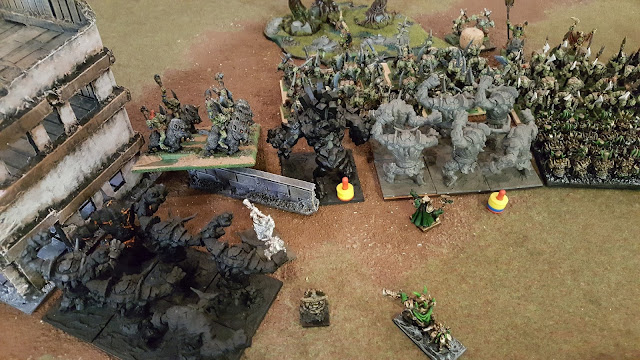 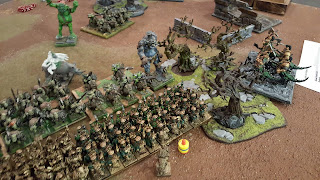 Watch the good play from Steve here, he used his Gargoyles as sacrificial troops to postpone any charge from my Gores over on the left flank into his Grotesques in the wood and the Grotesques themselves had the potion of the Caterpillar, which allowed them to charge freely and unhindered into the flank of my Giant. 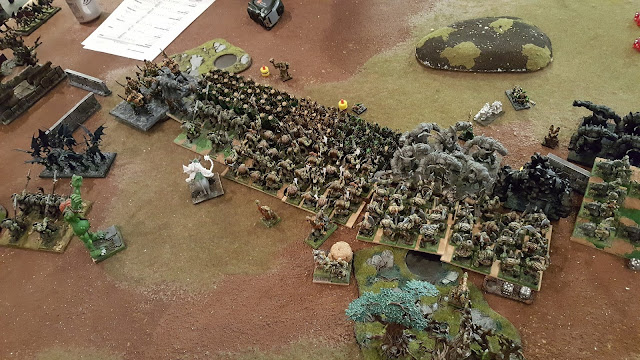 I have to point out the flank charge I had on Steve's Greater Golem, great opportunity! 32 attacks  hitting on 4's but I only managed 3 wounds, very poor. It was a risky ploy but I thought it was worth taking, till I picked up the dice. 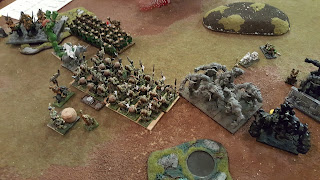 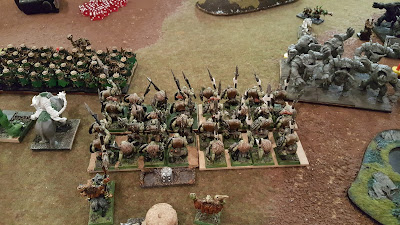 By this point in the game I had routed a horde of  Blacksouls, but the Abyssals were tearing through my flanks with further options on more flank charges. 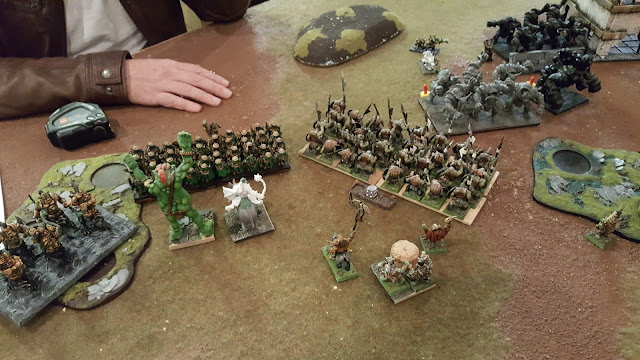 The Green Giant and the Warlord on his Slasher are about to rout the other Blacksoul horde while the Great Axe horde despatched the Grey Golems pictured above, so something to whoop about. 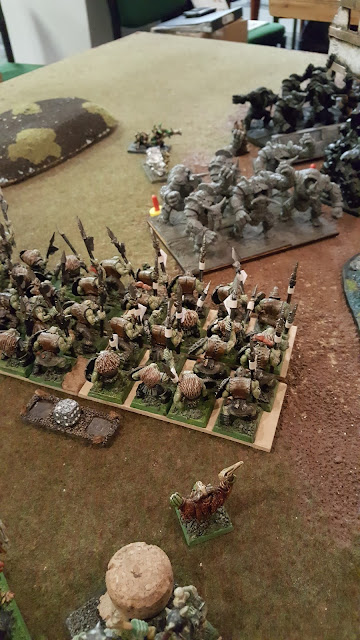 Some healing from my Godspeakers helped but not enough, the Great Axe horde on the right of the picture had 15 wounds at this point. One last attack from the Golems and they would be routed. 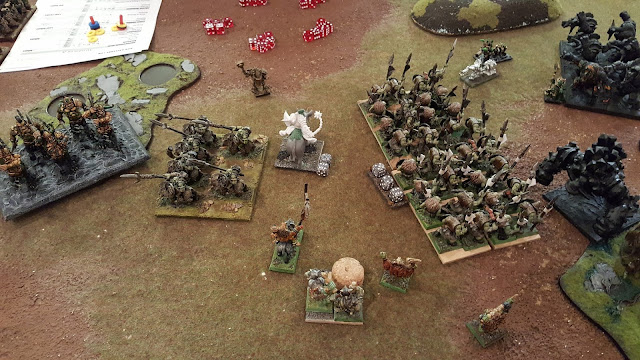 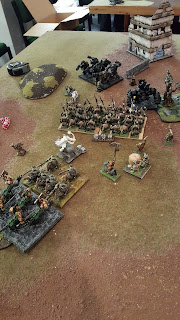 Which is exactly what  happened. 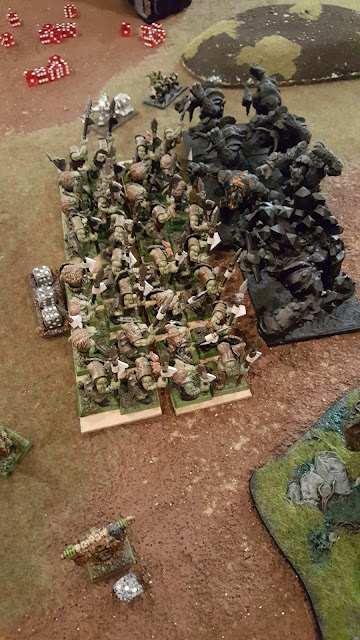 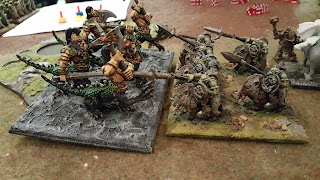 My last regiment of Gores managed to waver the Grotesques that had performed so well, but the end was nigh. 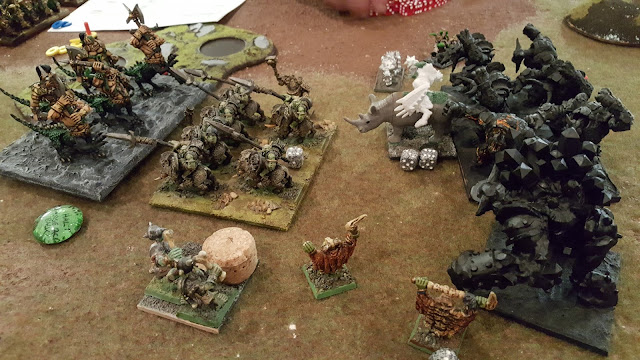 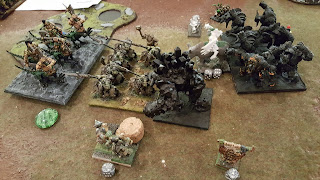 And with the rear charge on the Gores going as well as expected for the greater Golem the battle came to an end and Steve was declared the winner. Well played fella. 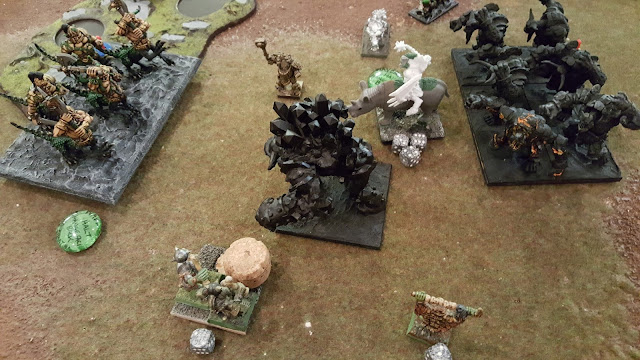 At one point in the game I thought it was going to be a complete rout, all doom and gloom, but the Orcs did show their resilience, so something to build on there. However you can see from the pictures that the centre of Steve's army held strong while his flanks folded in a classic strategy, impressive.

Changes for me will be to think about adding some chaff, Skulks and remove one unit of Gores. Hopefully they will give me a chance to set up some charges. Hopefully more of my Orcs will be painted for the next time they play and their general will be re-invigorated and ready to thump the enemy :-)

Steve, I have to say, played very well especially with a new army essentially and got a well deserved win.