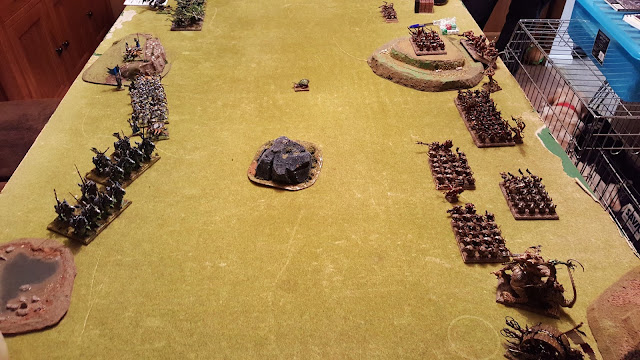 On Thursday I travelled over to North Leeds to play my friend Mick at Kings of War. We played the Dominate scenario 2000 points a piece. 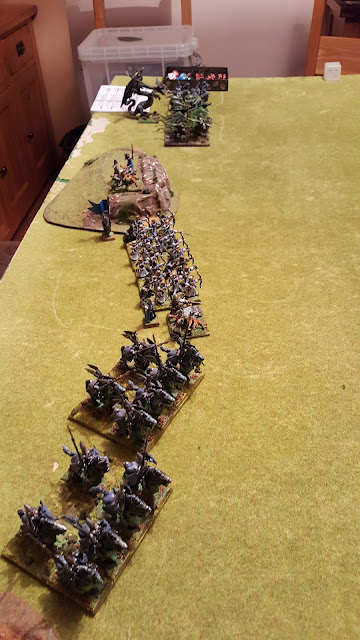 My Elf army, which I actually refer to as High Elves, lag over from WFB. 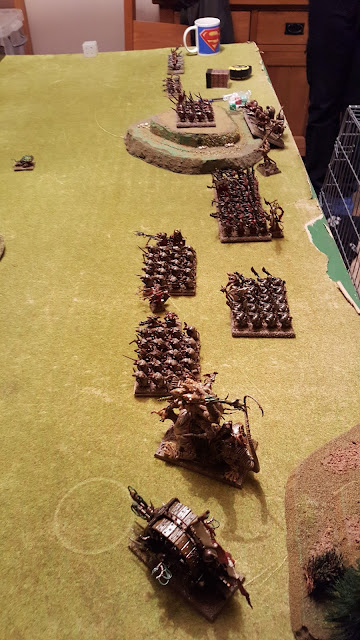 Mick's Ratkin, with a few changes. He has nearly completed basing up all his Skaven models for KOW. He had just based some Hackpaws and some Scurriers which he put over on the left flank. 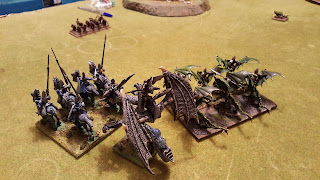 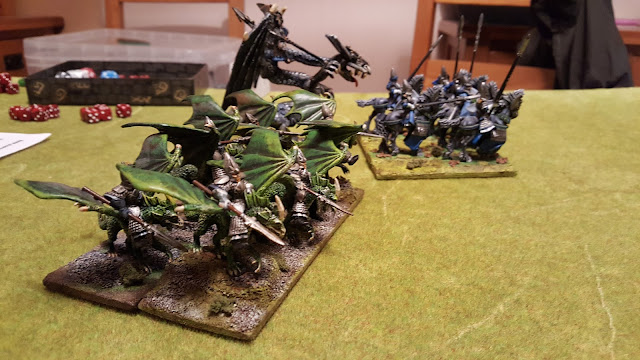 I saw an opportunity to exploit the left flank so plonked my Lord on Dragon, Drakon Rider Horde and Stormwind Cavalry on that side so I could swing towards the centre of the battlefield and gain a flank. 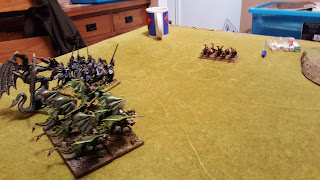 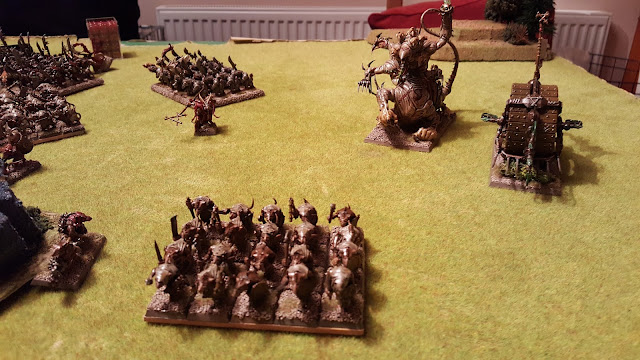 Mick had concentrated more of his troops on the right. All I wanted to do here was to hold them up while the stronger left wheeled round and the shooty centre routed units, hopefully. 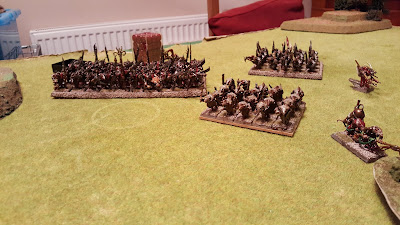 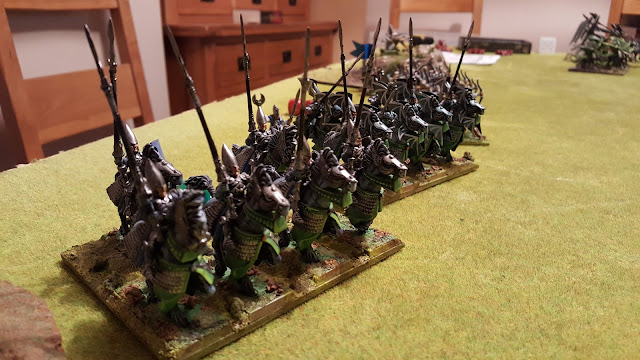 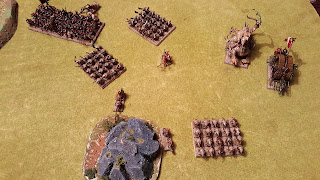 On the left a combination of bow fire on the Horde of Ratkin Brutes and the subsequent charge from the Drakon Riders routed them. The Hackpaws and the Scurriers were swept away. Dragon breath and Stormwind Cav did that. 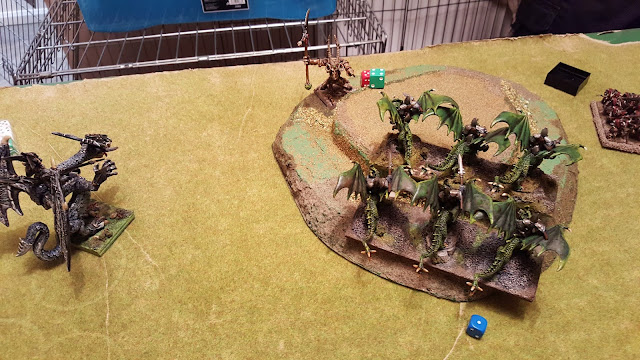 However the Drakons are now exposed, didn't see the Shock Troop Horde hoving into sight! 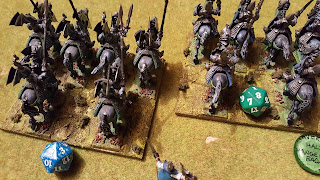 The Stormwind Cav on the right suffered wavering and wounds aplenty from Ratkin weapon teams, they are very nasty. 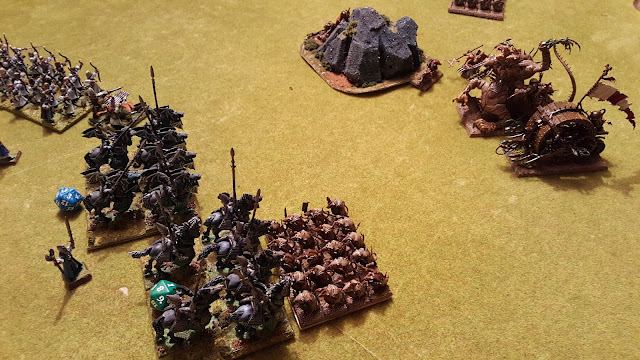 This is the point where Slaves take out the Stormwind Cav and the Shock Horde with aid from the Demonspawn remove my Drakon's, pitty. 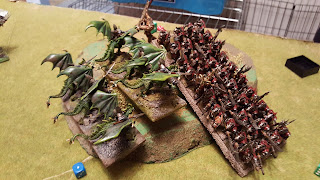 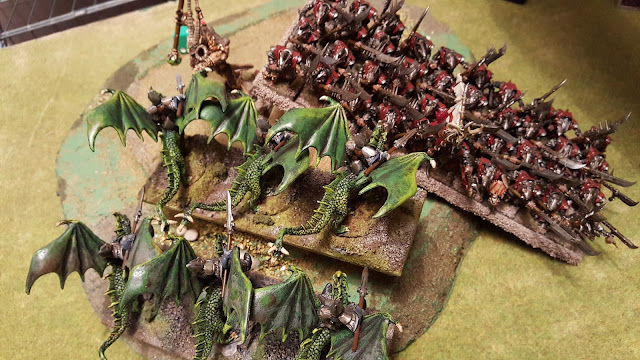 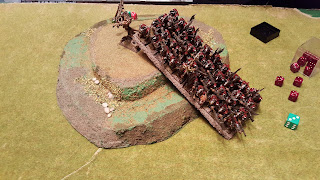 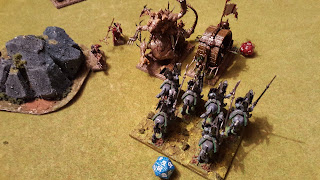 Despite 10 wounds I fail to rout the Death Engine, rolled 5 on the Nerve roll! 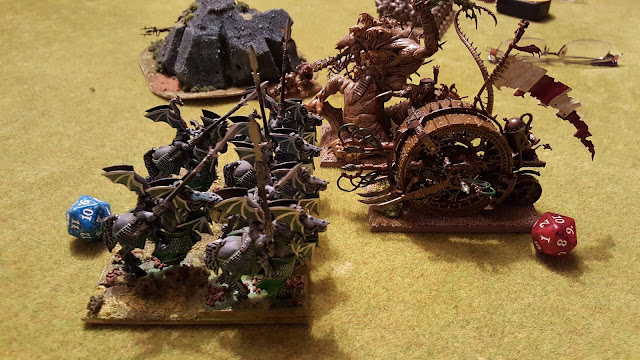 The Mutant RF and the Death Engine did a massive amount of damage to the Stormwind Cav, but had they been held back too long to effect the overall game? 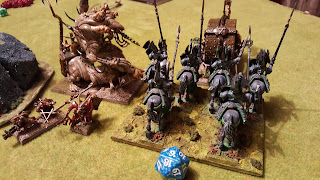 Mick's Slaves take the centre of the field and the lead. 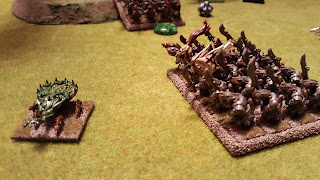 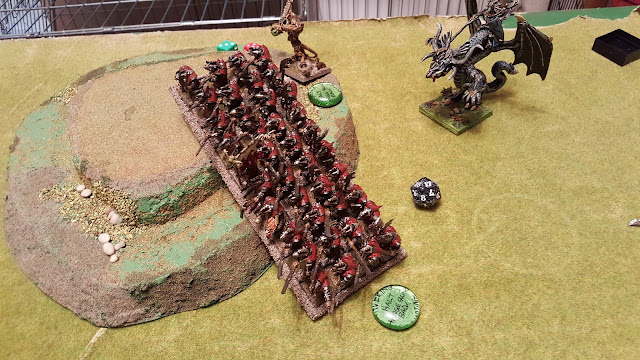 Through a combination of shooting I manage to waver both the Demonspawn and the Shock Horde. That gives me time to organise my attack with the Stormwind Cav and the Dragon Lord. 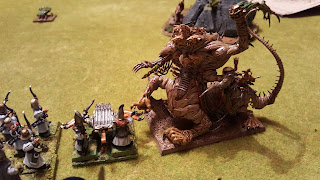 The Mutant Rat Fiend devoured the Bolt thrower with relish. 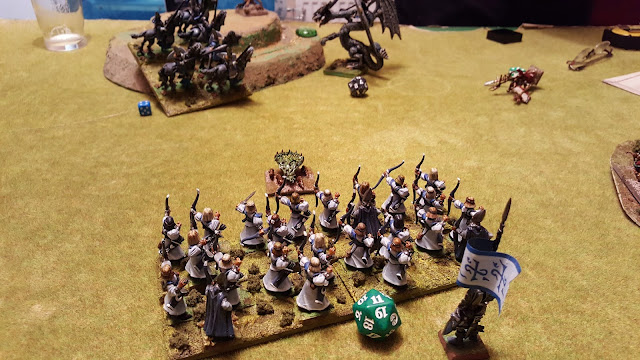 However in the dieing moments the Shock Horde was routed, the Mutant RF was fireballed to death by one wizard, while the other did the same to the Slave regiment. My horde of Archers sped forward and claimed the central "dominate" marker in the centre.

With little left on the board Mick decided the game must came to an end and the Elves claimed a victory. A thoroughly enjoyable game yet again with some interesting tactical problems.
Mick is still getting used to the way KOW works, but every game is getting more and more fun to play.
Cheers Mick :-)