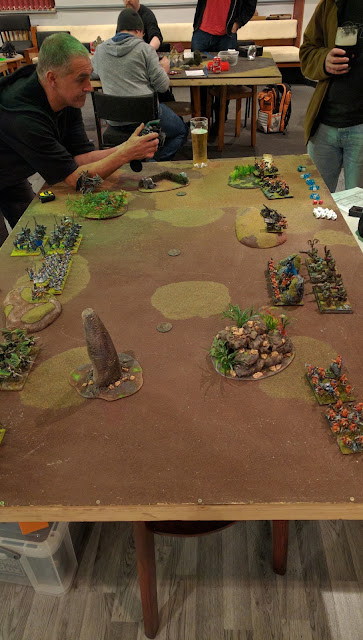 Played against Luke last week at the club. A standard 2000 point battle, the scenario was Loot again, second time in two weeks I've played that one. I played with roughly the same army as I did the week before. Luke was playing with a slightly different version of his Dwarf Berserker army.

No, I don't have green hair, some of these shots are from Steve's camera, do I need to say more. 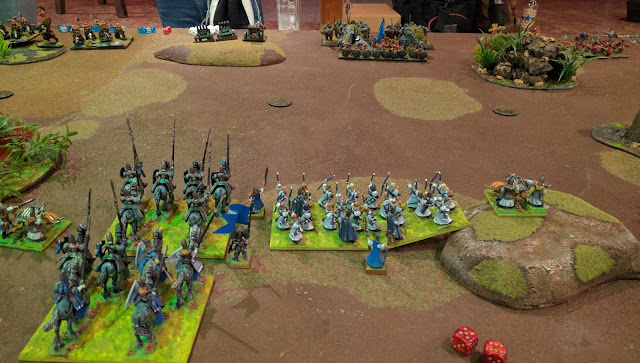 The scene from my side of the table. 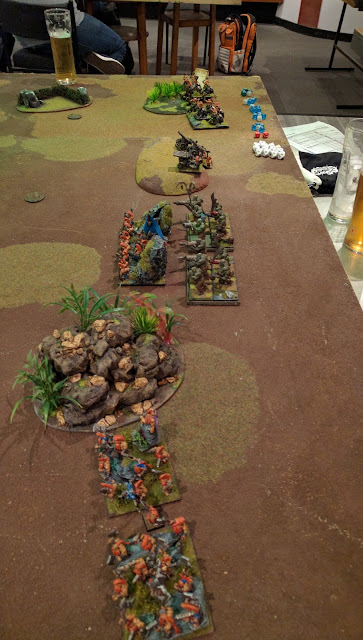 Luke's Dwarfs with a rather cheeky contingent of 2 units of shooting ogres as allies. 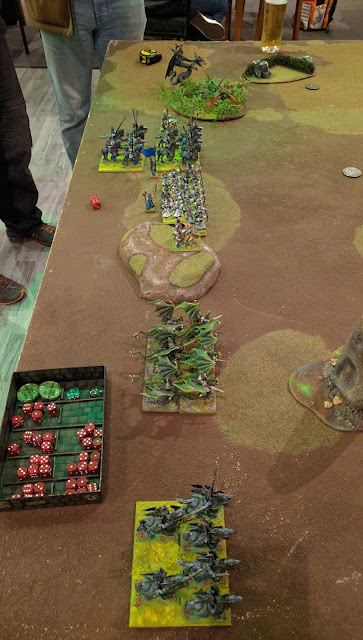 Not to be outdone on the cheese front I brought my drakon riders again. 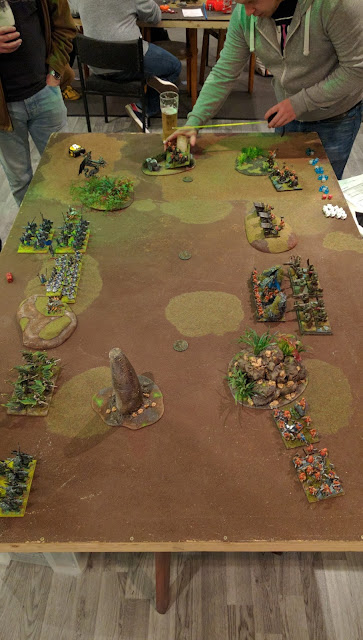 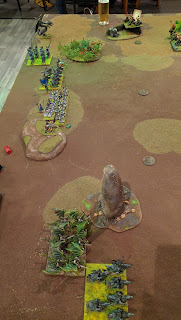 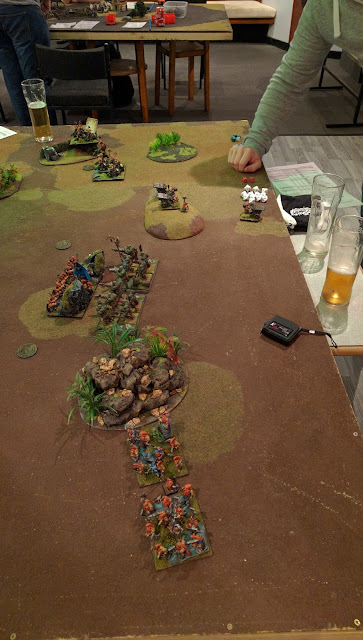 The three loot counters can be seen down the centre line. 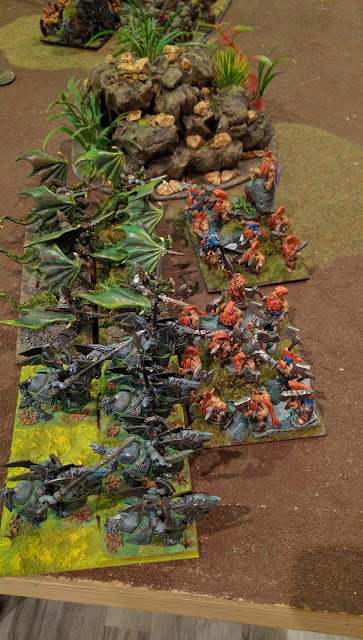 My drakon riders and stormwind cav attack the right unit of berserkers, I knew I had to do loads of damage to get rid of this unit so I could then turn to face the second unit. Berserkers do not waver, they are fearless and although only a regiment they have a very high nerve. 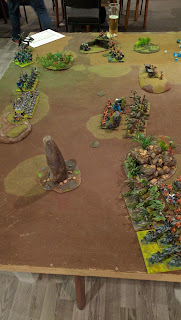 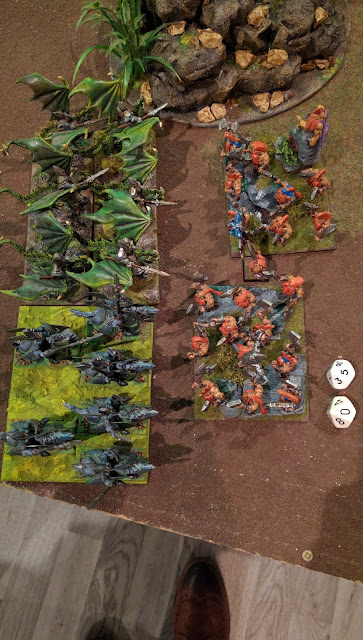 I managed 15 wounds but failed to make the regiment rout, oops, not a good start. 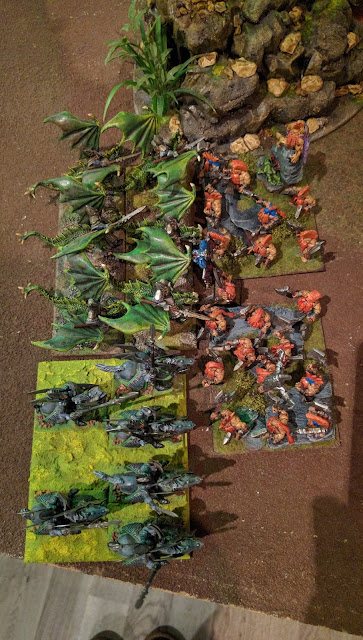 Both the berserker regiments charge the drakon riders. 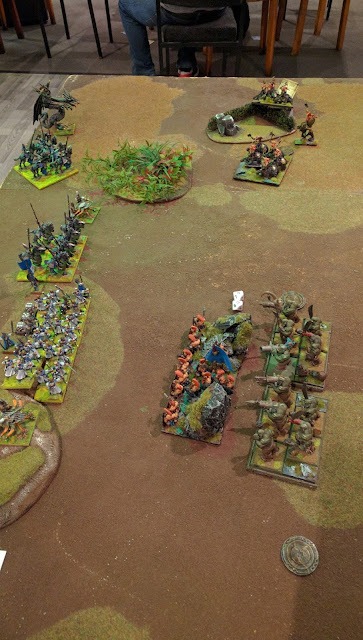 In the centre the kindred archers had been pouring shots into the ironclad and they were not so well, although the ogres were in fine fettle behind them! 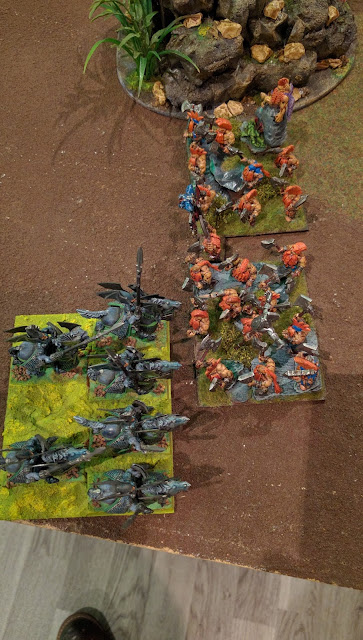 The drakon riders were routed, heavens! 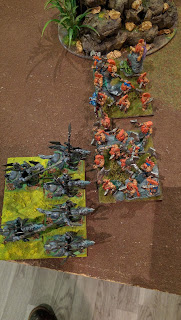 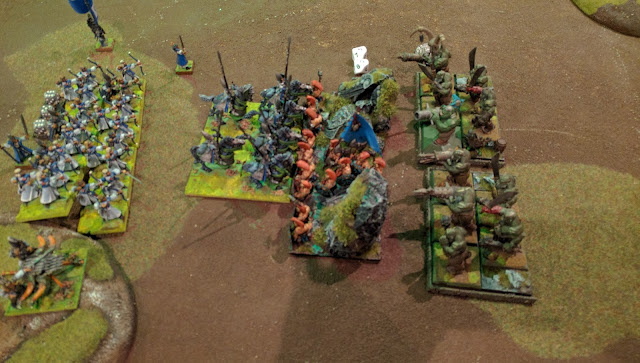 The stornwind cav scharge forward and attack the ironclad, hoping to clear them from the field. 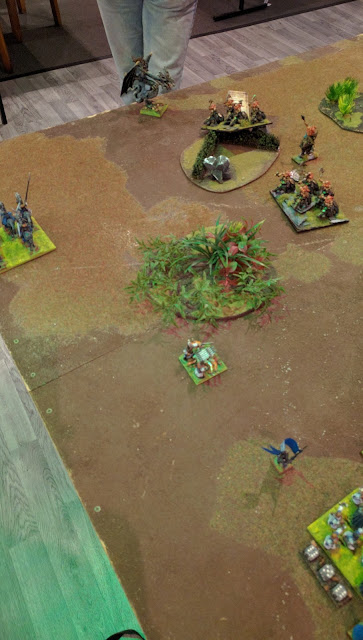 A cat and mouse game was going on over on the left flank, I couldn't get a clear charge with both the stormwind cav and the dragon lord. Luke was pushing forward aggressively.

You can just see that the kindred archers were on 17 wounds, luckily for me I think Luke threw  a double 1 for the nerve roll. (see later photo) 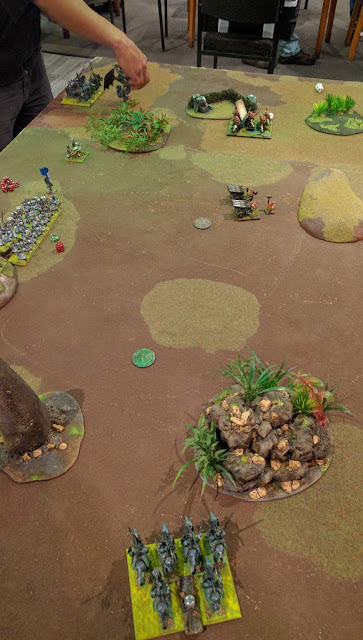 As you can see here only he stormwind cav remain on the right flank. First the cav charged their original target and routed the first regiment of berserkers, while the kindred archers put around 12 wounds on the other regiment. Next combat turn the berserkers only managed 4 wounds on the elf cav, really letting them off. The elf cav then charged the berserkers and slew them. 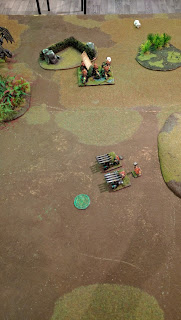 While I managed to shoot the organ guns in the first turn, routing 1 and wavering another, the rest of the game I kept well out of their way. Although they did claim the scalp of the stormwind cav that charged the ironclad in the centre of the field.

At the top of the picture you can see the dragon lord and last stormwind cav basking in glory, having just removed a regiment of brock rders and the dwarf berserker general. 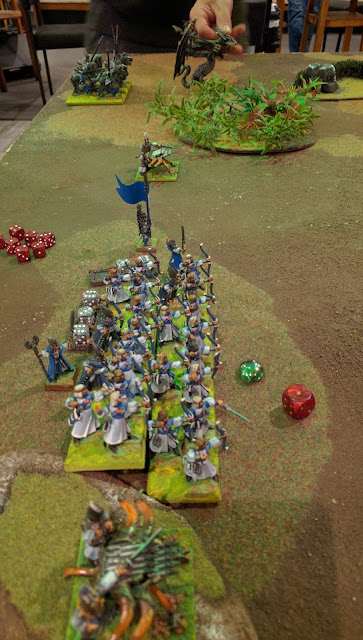 Sorry for the lack of photographs at the end, some seem to have been lost in translation, my camera was having a mad hour during this battle refusing to focus, altering its settings and generally making a nuisance of itself, luckily Steve was about to take a few shots.
The final outcome was a win for Luke, because although I had managed to maul his army rather badly, the objective, to gather more loot counters, was beyond me, I just could not get a unit on one of the markers and in the dying moments of the game Luke used his last brock regiment to claim one and win the game.

So excellent game and a good win for Luke :-)