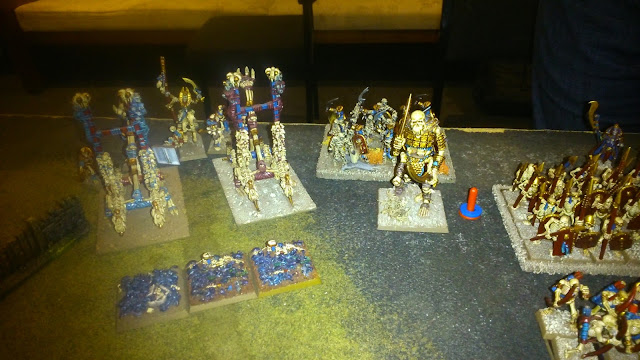 Steve's Hand of Dust 2000 pt army, he was trying a different configuration, with 2 catapults and 2 troops of archers. 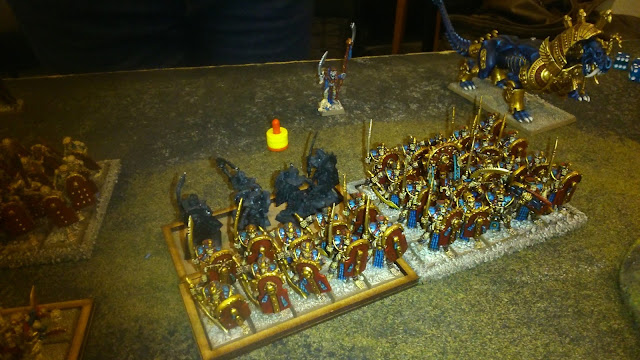 We were playing the Loot scenario, you will see 3 markers in the centre of the table. 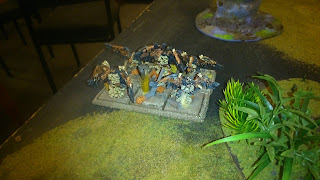 Carrion making their way down my left flank trying to threaten the kindred archers. 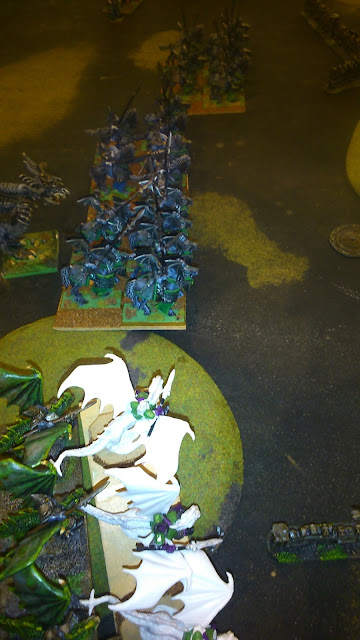 On the right flank the majority of my force moved towards Steve's horde of revenants, which worried me somewhat. I've played regiments and their nasty enough, so a horde.... 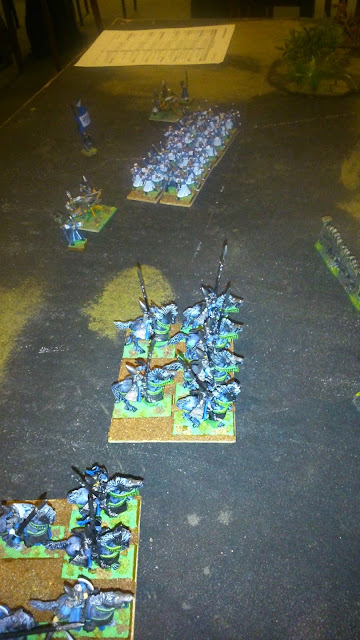 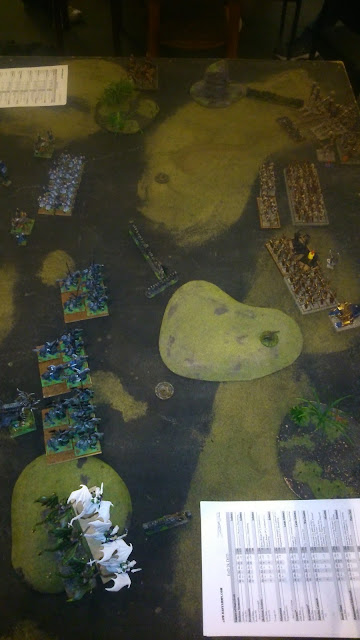 I had deployed over to on side in an attempt to get round Steve's troops and get some flank charges. In Kings of War you double your number of attacks when charging in the side flank and triple them when you charge the rear of a unit. Difficult to achieve but if possible really makes the 3 regiments of  stormwind cav a force to be reconned with. 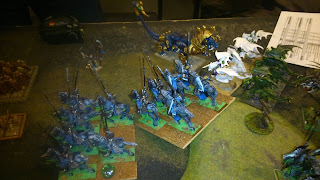 The horde of revenants was routed by 2 regiments of stormwind cav, even though one unit charged over a fence which meant they were disordered, hence loosing their thunderous charge bonus. 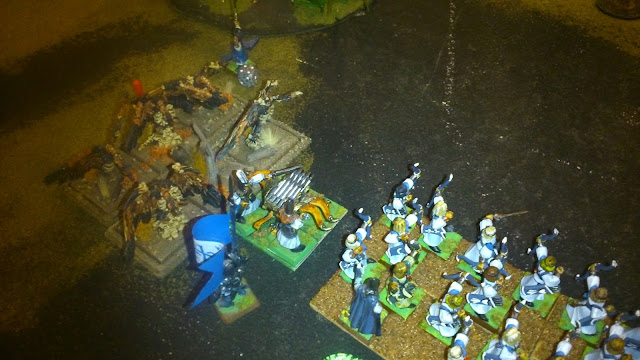 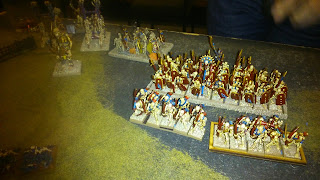 The horde of spears with its covering troops of archers move forward. 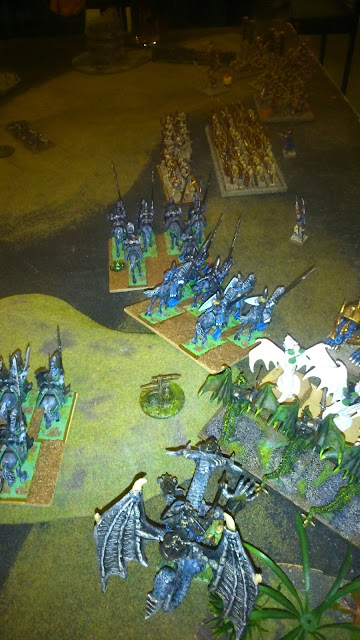 The stormwind regiment on the far left picked up a loot token which sloed it to movement 5.
The rest of this flank were looking for more targets now the revenants were gone. The behemoth struggled on alone and in a shot I missed he turned and charged, using surge, into the flank of one of my stormwind units, destroying it easily. My drakons had flown over the top and charged the unit of mummies in the flank and managed to rout them, that's why are sat out in the open doing nothing in the shot below. 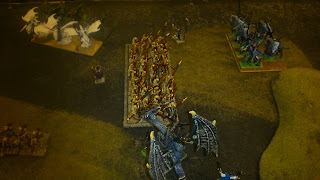 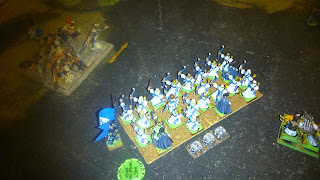 Due to the balefire catapults good fortune the archers had suffered 16 wounds and as a result they wavered, meaning they were having a lapse of concentration or feeling vulnerable and not able to shoot or attack in melee. Nuisance! 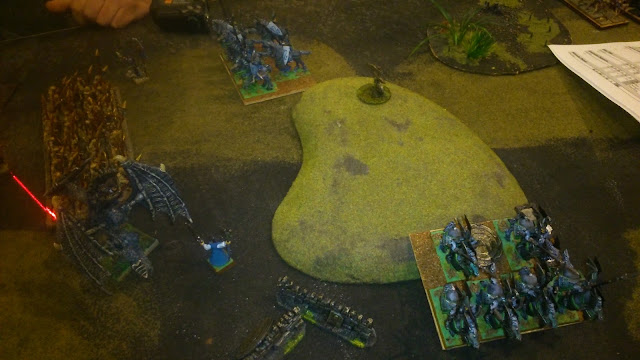 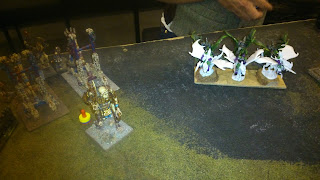 The drakons, just before they are charged in the side by the spear horde agin with the use of surge, well played Steve. 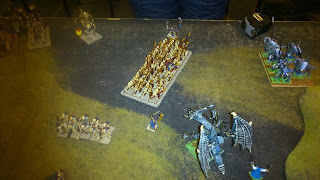 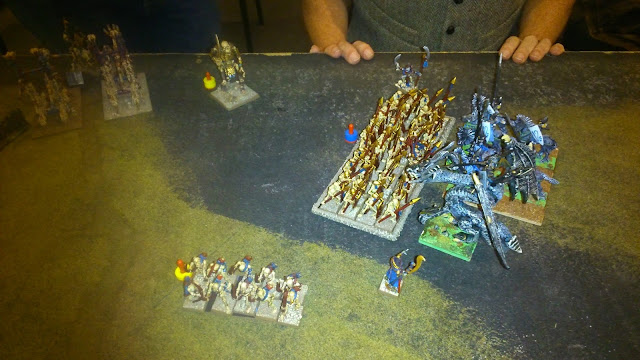 I managed some wounds on the spaer horde but not enough to rout them. At this point Steve charged both the giant and the spaer horde into the stormwind cav and destroyed them. At the same time his pharoh charged the regiment of stormwind with the loot counter and mauled them very convincingly. 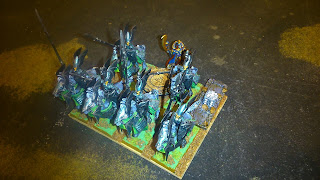 My kindred archers manged to rout the small troop of skeleton archers who had picked up the loot counter on the left flank, so they dropped that. At the moment no one had any loot and there was no clear leader. 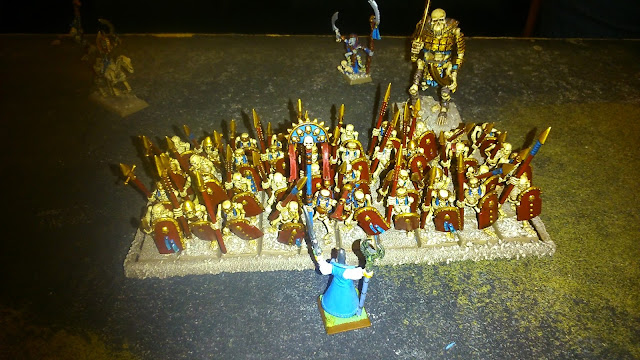 However in the dying moments and only after Lee insisted I follow his advice, which was the only way to win, I placed my mage in front of his horde and flew my dragon lord over to take the dropped loot counter. 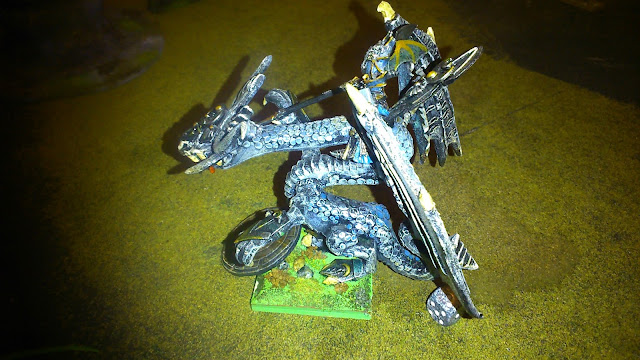 The final shot is of the only loot counter in possession of either army and so the elves won the battle, much to my surprise.

I think Lee felt that my army selection was rather aggressive which led him to post on Facebook that he was worried that the clubs resident fluffy player had turned nasty. There was much discussion and lots of laughter and ideas about how I could make it even filthier.

I had a great game and it was smashing to get a chance to play Steve, who is making something of a come back down at the club.