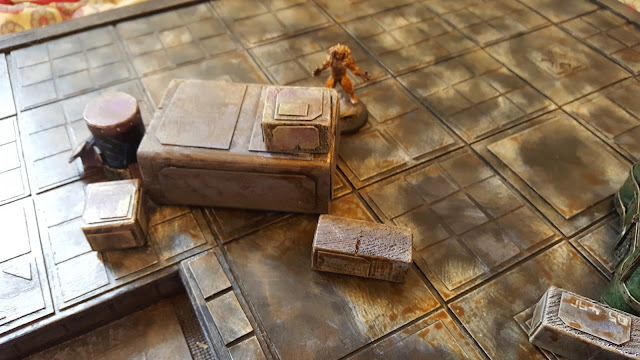 I finally got a set up a solo game of Marvel Universe Miniatures Game, only a few months after it floundered to a halt! To get some idea of how it worked and felt, more on that later. 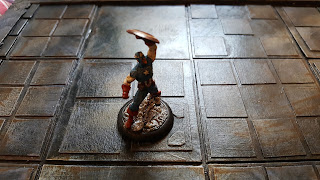 Featured in this very straight forward, "get used to the rules game" I had Cap from the Avengers playing against Sabretooth of the BOEM (Brotherhood of Evil Mutants) The scenario was, Sabretooth was tasked to find data linked with Tony Starks Ultron Initiaitive, blue prints and consrtruction plans etc. He has to check the main consols in the large industrial complex, you'd have thought they would all be linked but no, to find the data, 4 in total, use a Power, make a Willpower check and then throw any double for the consol to contain the info on 2 d8. 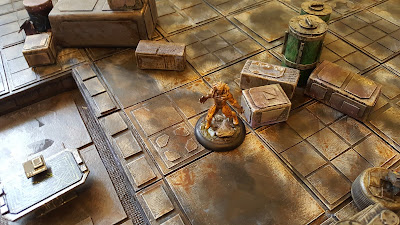 Sabretooth doesn't realise he has been spied, Cap is following his every move and will try to stop him. Alarms had been set off and Tony had asked Cap to check what was going on. 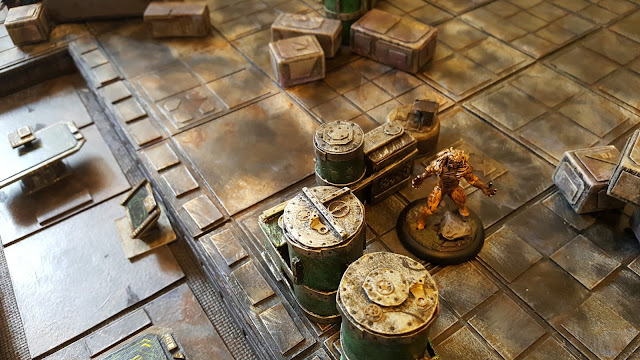 Using both his move and then a pounce to leap closer to the first Consol, Sabretooth shifts quickly. 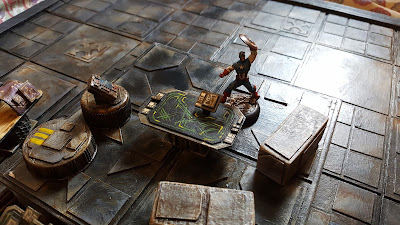 Cap moves forward but out of sight to get a better view. 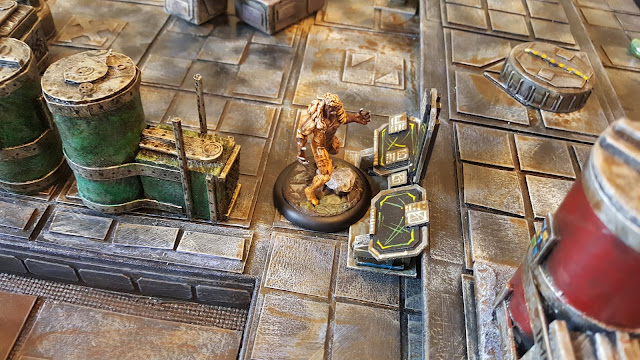 Sabretooth checks the data banks and there is nothing at this station. 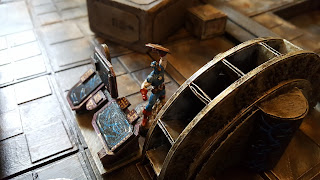 Cap continues to shadow Sabretooth as he approaches the second computer. 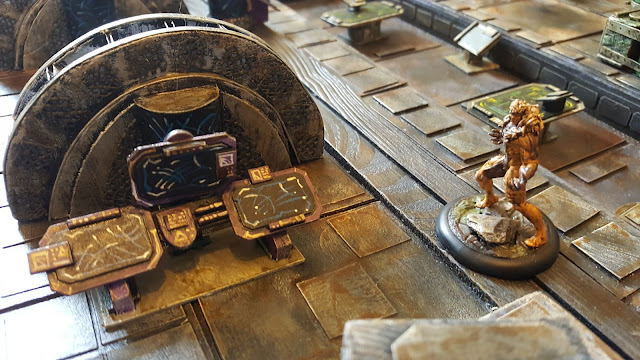 But its obvious that Sabretooth should not be there and so Cap calls him out before he can reach his second objective. Getting only a growl in response, what did he expect, Cap decides to attack, hurling his shield at the huge mutant. While hurt Sabretooth shrugged the attack off and moved on. 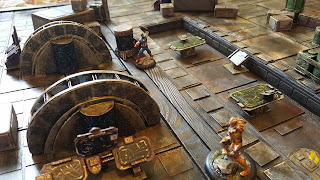 Demonstrating huge committment on the mission, Sabretooth reached the second but found nothing of what he wanted there either, Grrrrr.... 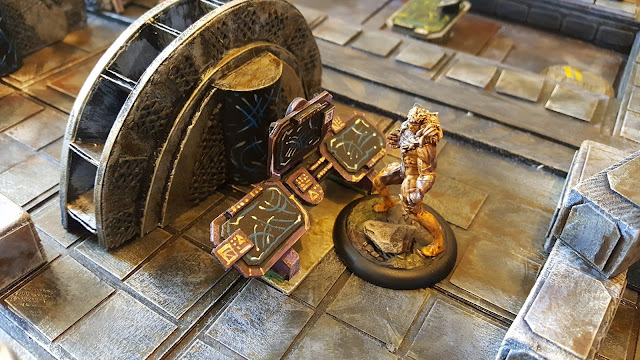 Cap sprints round the turbine and launches another Shield Bounce attack, which manages to damage Sabretooth. 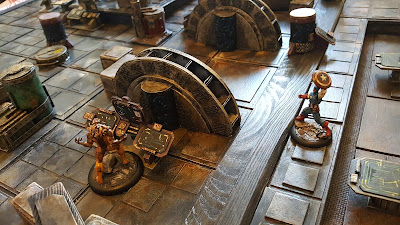 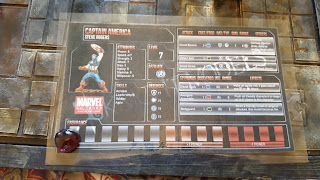 A quick look at the data cards which really help the game to flow, the red bead at the bottom of each card indicates wounds, so while Cap has recieved no wounds, Sabretooth is on 6 and has moved into the Pale area. 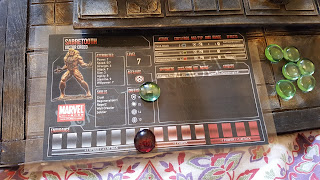 At this point Sabretooth had had enough, it was time to knock the Captain on his backside. 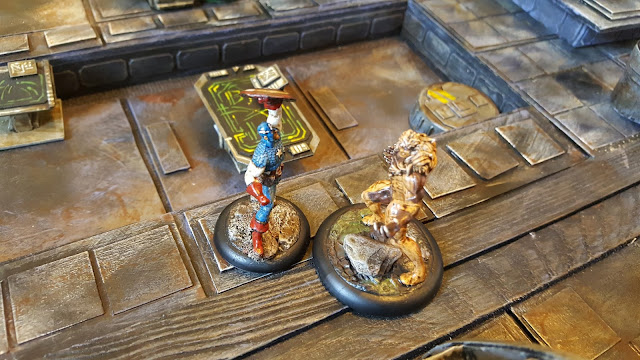 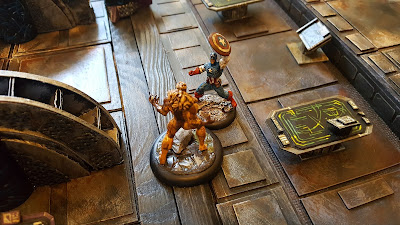 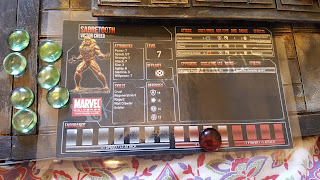 It was at this point that Cap used his shield in close combat that I realised he could Stun his victim. Shield Strike causes Stun/1 meaning that Sabretooth lost one Power, restricting what he could do in his turn. 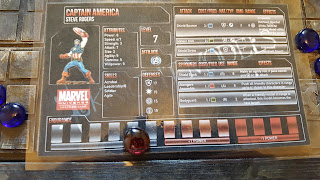 But with Cap on 4 wounds Sabretooth resumes his mission. 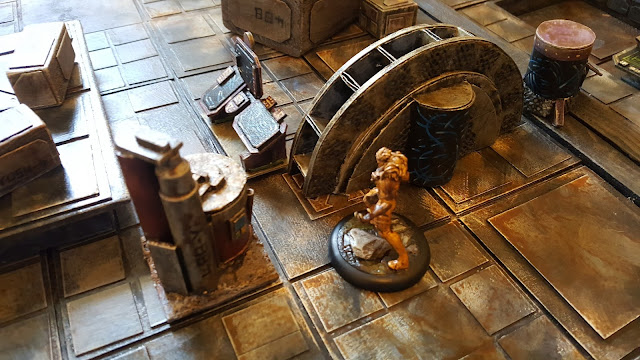 Again using pounce in conjunction with his sprint he moves 13" and outdistances Cap easily. 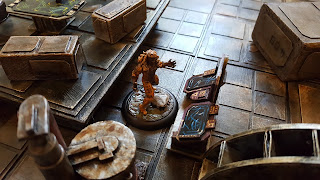 Again this his not the consol, Sabretooth was losing his temper by this stage, but the last station was just behind him, with Cap in the way. 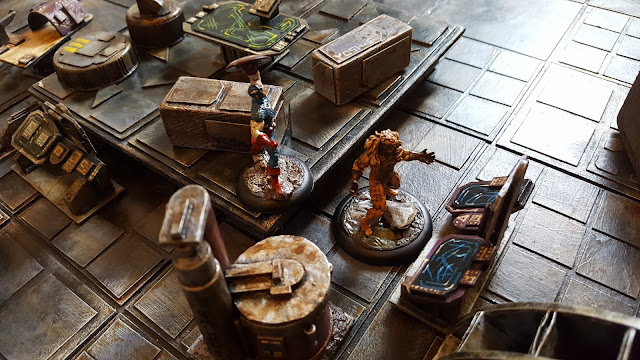 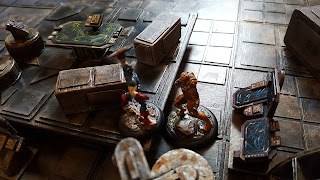 Cap scored another 2 hits on Sabretooth, overloading his attacks with Shield Strike and reducing Sabretooths actions further. Sabretooth spends Power to Claw Cap, but misses and then I realise he needs the data and to get off the table, so he moves to the last station. 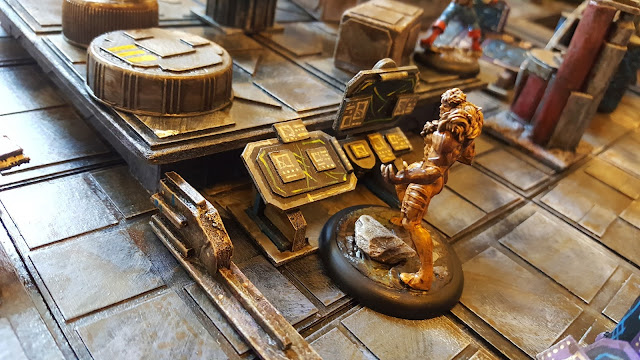 After successfully retrieving the data, Sabretooth rounds on Cap with the intention of clawing him and then running. 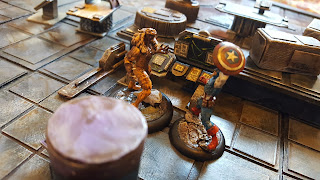 At this point Sabretooth was very unlucky, I managed to roll some rotten dice for his attacks and then Cap managed to squeak 2 more blows with his shield. 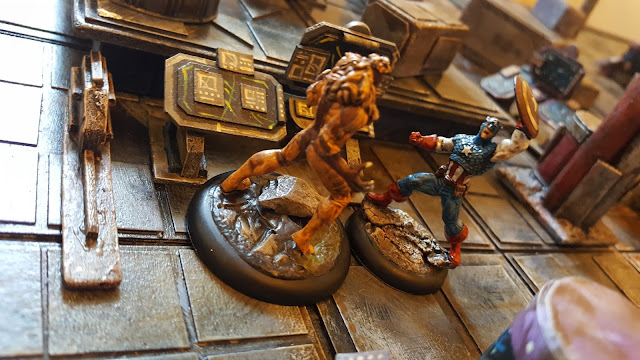 Sabretooth really had to leave and only had 2 Power to do it with. He broke from the combat and moved to the edge of the table. Victory was in sight, next turn he would leave the factory floor with the data and his boss would be pleased. 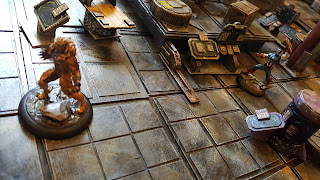 However the accumulated Stuns really did hamper him and with a flurry of blows Cap managed to remove his last wounds, knocking him unconcious. 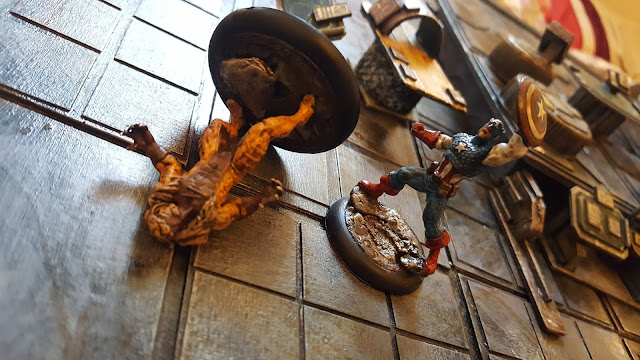 MUMG usually uses tokens to show if a character is KO'd but I'd rather lay the models down. 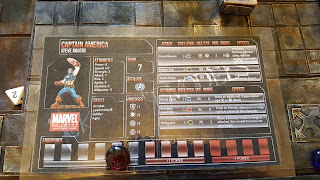 So Cap ended the game in rude health, but not so Sabretooth, who was then dragged away to be questioned when he regained conciousness. 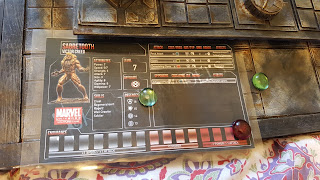 Conclusion
I enjoyed playing my first game. Points to consider

Use different coloured 8 sided die to keep play easier.
Have a token to indidcate who has initiative each turn as I kept losing where I was.
I am sure I missed several KO tests on Sabretooth, but I also missed several regenerations too!
Always have a scenario in play to give games a reason, this really helped me as I played this solo, gave Sabretooth a real focus for his actions.
Cap benefitted from Sabretooth needing to reach the consols, otherwise more hurt might have come his way, but that was the scenario, so....

Next game will be a rescue attempt to get Sabretooth back, I will escalate things a little and use 3 characters next time, Black Panther, Pyro and Toad.
Look forward to it :-)