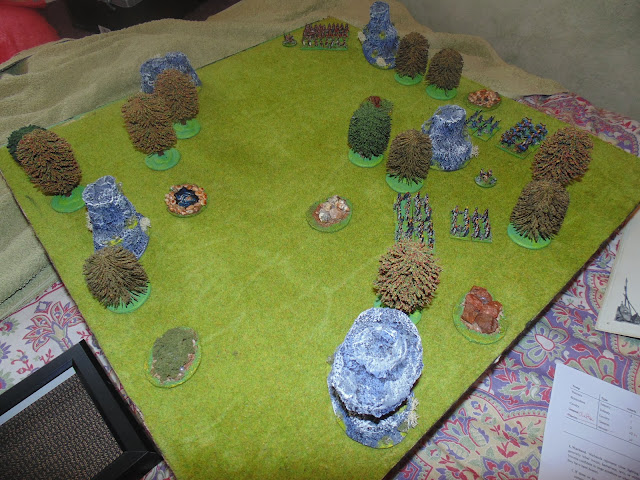 Legate Paetinus could see the obvious way throught the forest south of Calcaria and didn't like what he saw. It looked like an excellent place for an ambush. But his men were already tired and needed to reach their new home in order to rest. This was his first command and he needed to at least appear decisive. 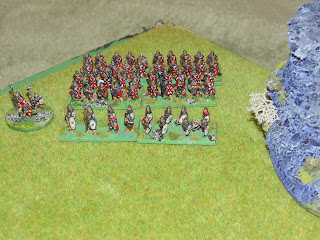 MacEalar kept close to the rocks that concealed most of his warband. Surely the stupid Roman scum would take the most direct route to their fort at Calcaria. The trap was ready, this was his chance to show his father he was a chieftain of merit. 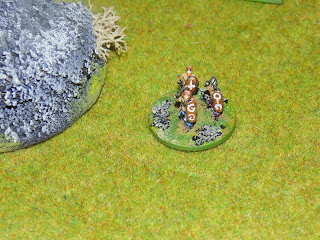 In this first small skirmish game all the Romans under Paetinus had to do was to survive and reach the far end of the board. All MacEalar had to do was to destroy the lot. I had a few trial games and the Romans can really put out some damage, so I was expecting a close hard fought game.

Calcaria: Tadcaster to you and me :-) 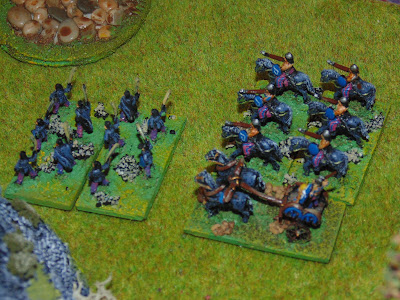 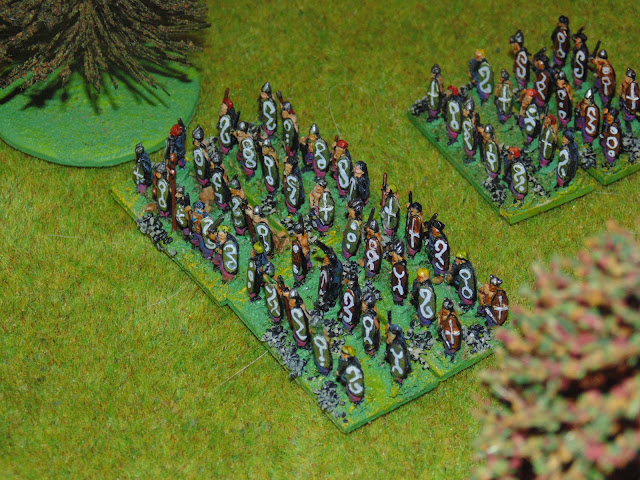 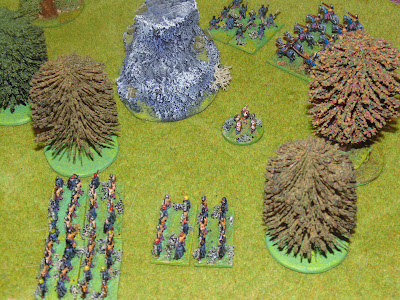 MacEalar ordered his skirmishers forward, but they stood there chatting taking no notice at all. By the gods, not a good start! 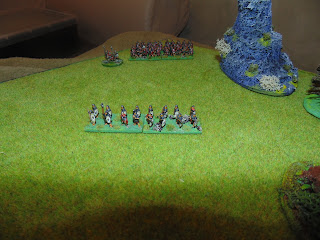 Paetinus sent his Auxiliaries forward intending the Legions to follow, but not one of them moved. Nerves gripped his lower portions. 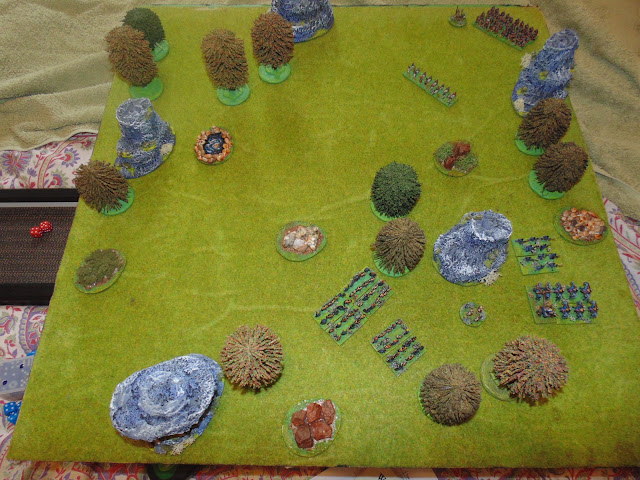 In the second turn both the fresh faced commanders failed their orders, nothing happened at all. Nerves ruled the moment. 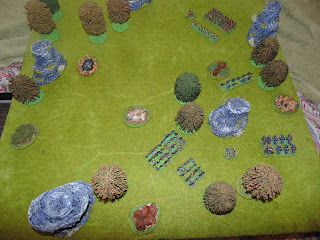 MacEalar shouted at the skirmishing Parisi and they moved forward to hurl stones at the Auxiliaries, but failed to cause a single wound. MacEalar's hand hit his head.

Paetinus shocked by the sudden appearence of the Parisi barked orders at his Legions and they sped forward. 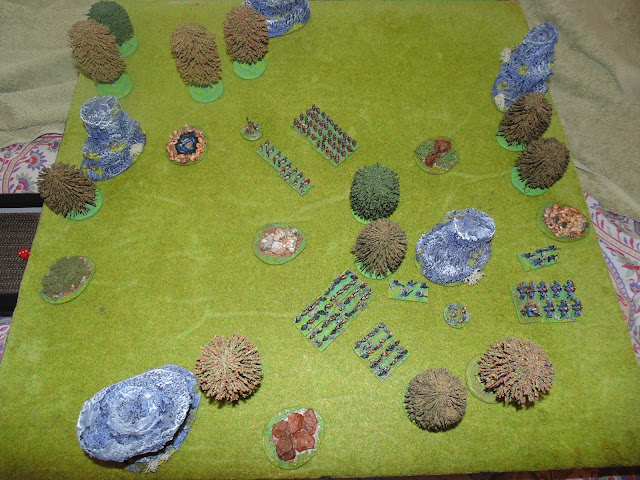 Fearing the Legions might charge them the Parisi skirmishers evaded away from the well organised troops. MacEalar tried to send the Cavalry and Chariot round the back of the Romans, but they refused to do a thing.

Paetinus encouraged his small parol to move as fast as possible through the dark forest. 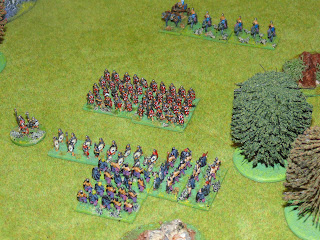 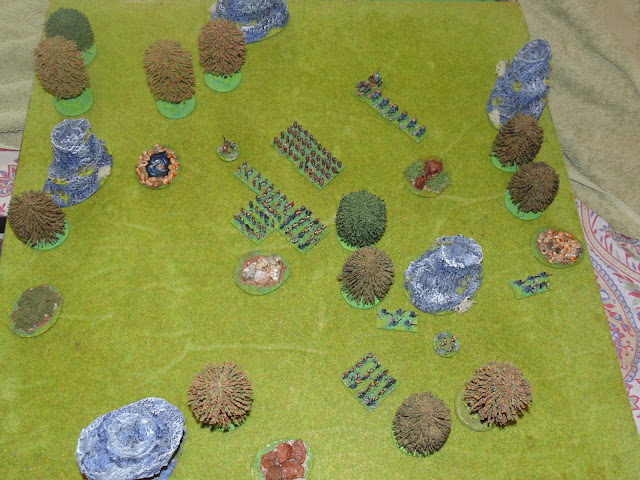 MacEalar could see his warriors realise the Romans were close and he could see their blood was up, they charged into combat without him needing to give an order. He held his breath. But he didn't need to as they crashed into the Auxiliaries and destroyed them with ease. Two units advanced into the second Auxiliary unit and destroyed them too, while the other two wild with success advanced into the Legion ahead of them and narrowly killed them. Striking back the Legions were so shocked they only managed a single wound. 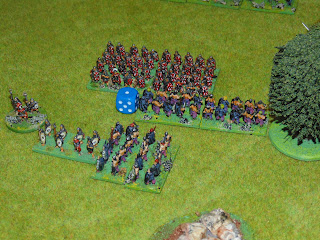 Then to add insult to injury MacEalar saw his chariot and cavalry units move behind the Romans and shoot at the Legion closest, with a huge whoop of glory 3 wounds were caused to the unit and it was also destroyed.

Paetinus went pale.
His remaining Legions evaded as best they could the bow fire from behind them and headed for the end of the forest and safety. Would they reach it? 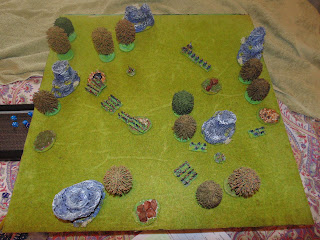 Two Legions left of Paetinus's command, a poor start to a career in soldiering. 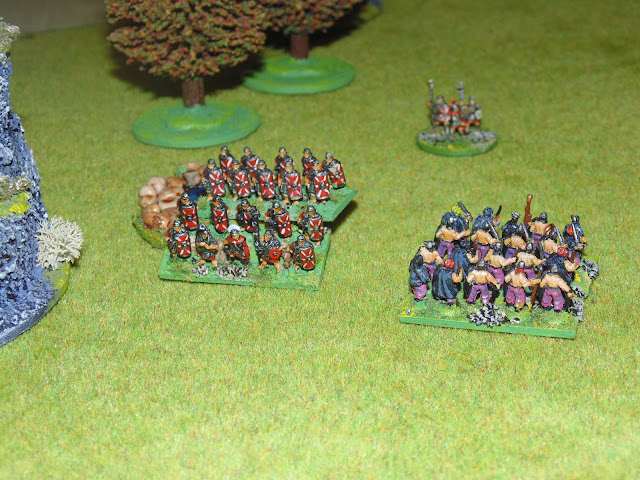 He ordered them forward to try to save their souls from the wild heathens. Then ran himself toward safety. 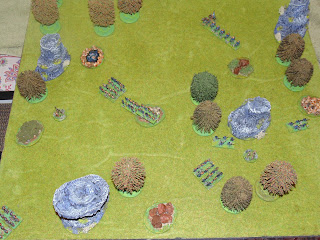 MacEalar turned his warriors round to face the fleeing Legions, but failed to close with their enemy. 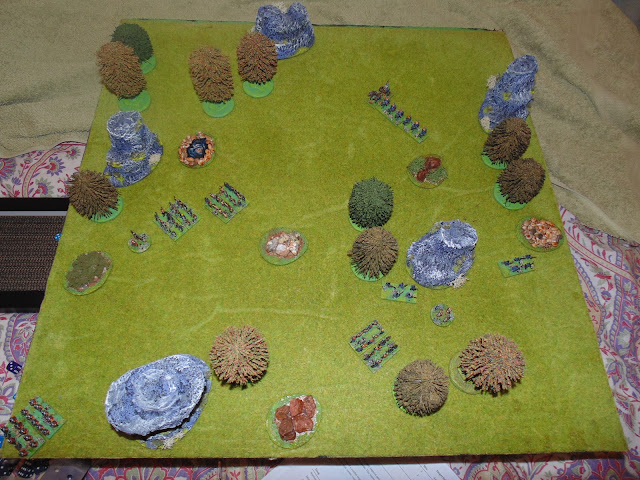 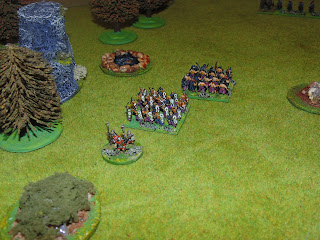 Paetinus went to command his troops from the conflict but found they could not hear him, the din of Parisi warriors filled the air. He raised his voice once more and this time they got the message and ran. (Portents- allowed him to re-roll the command throw) 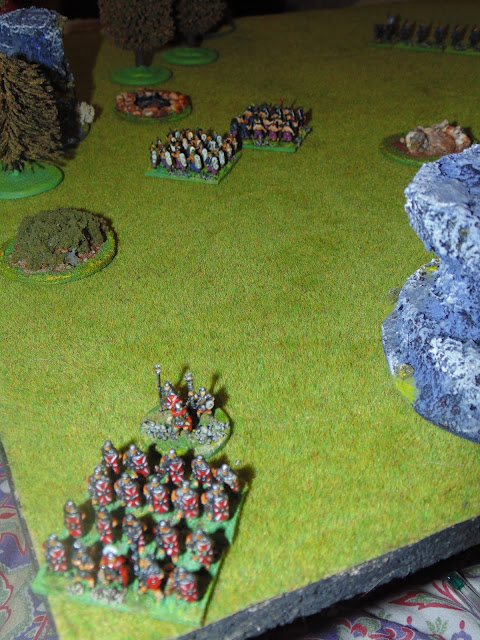 Then the less than happy commander followed up his troops and left the forest. 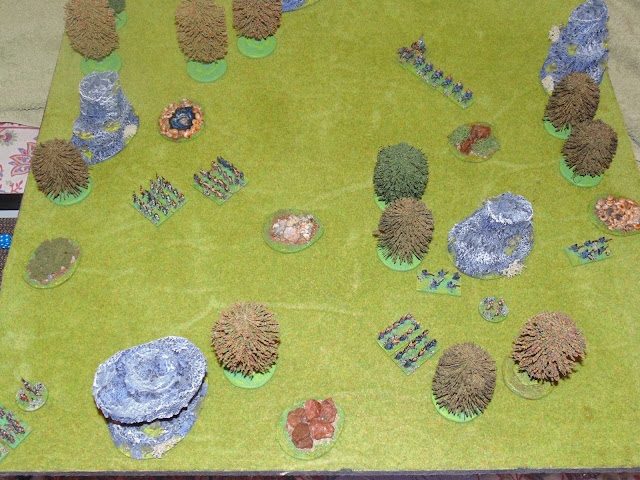 Well I am sure I did some bits wrong there, but on the whole it worked fine. I was very shocked how well the Parisi Warriors did in combat, as was Paetinus.

In the end the Parisi won a great victory, although they did fail to completely destroy the patrol. So technically the Romans won, glad in a way or it would have been a very quick campaign.

The last two Legions and Legate Paetinus made it to the fort at Calcaria, while MacEalar returned home to discuss his next military excursion with his father.

I felt really rusty playing this game, been years since I last played but look forward to the next time. I need to make some better wound markers other than dice, something a bit more fitting and less bright, will have a search on the net and see what other people are using.
Should be a follow up game in the next month or so and will be producing some campaign material, maps of Yorkshire etc soon.