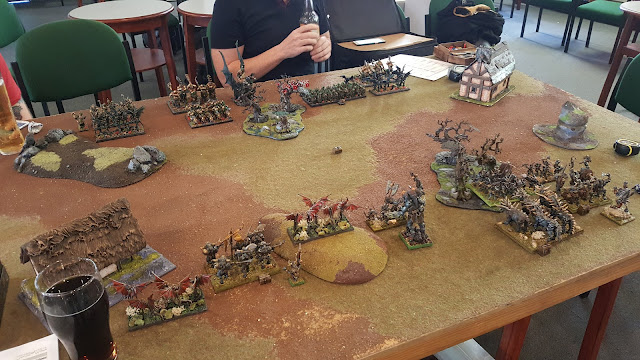 Played Kings of War down at the Wakefield Warriors Games Club on Monday, our last Monday infact, we are swopping to Wednesday evenings from next week, which I prefer to be honest. 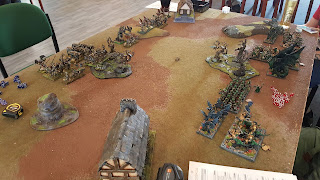 Me and Steve locked horns across the battlefield, playing the Push scenerio, which is where counters are placed by each player and one placed in the middle. The player holding the most by the end of the game wins. Tokens can be left on the field or held by a unit, more points are scored if the opponents are won from a holding unit. 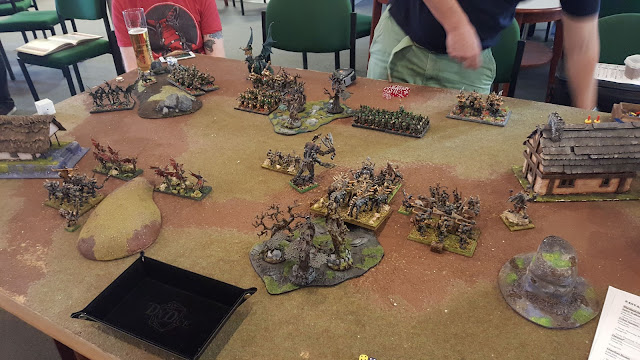 I got turn one an moved up aggressively, my intention to try and wipe out the right flank before turning to the left. 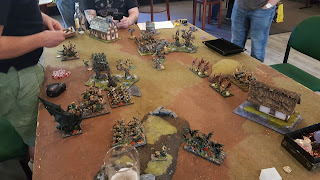 While I set up charges on the right Steve was doing the same on the left. 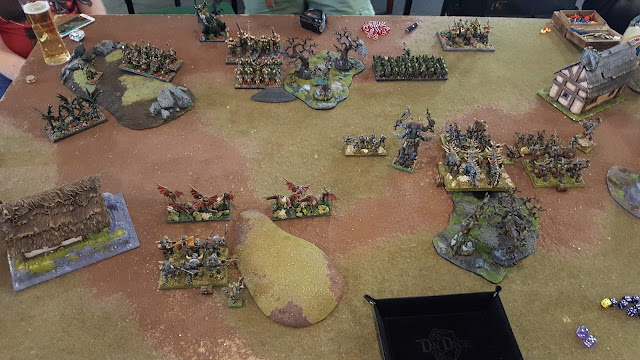 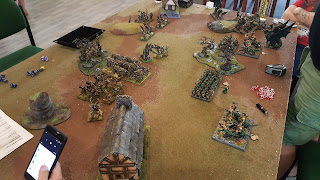 So while I was dealing damage to his Abyssal Dwarf Blacksouls horde, he was doing the same to the Brutes. 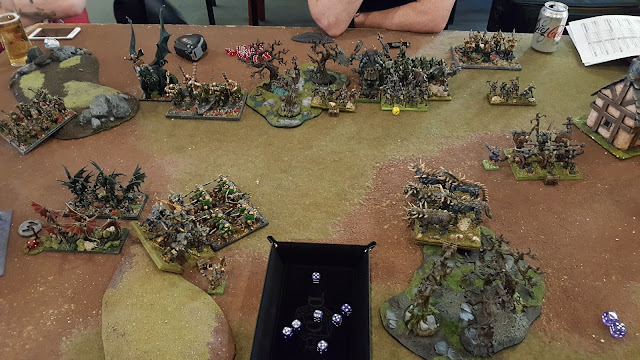 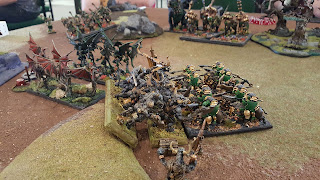 I did think the Brutes may survive the Slave Orcs charge but I also wanted to have the situation covered by the Stampede so I turned it to face the left flank. 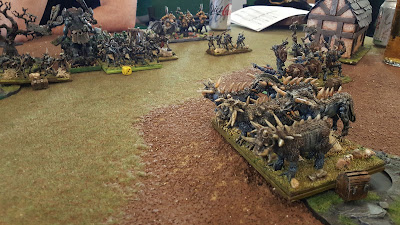 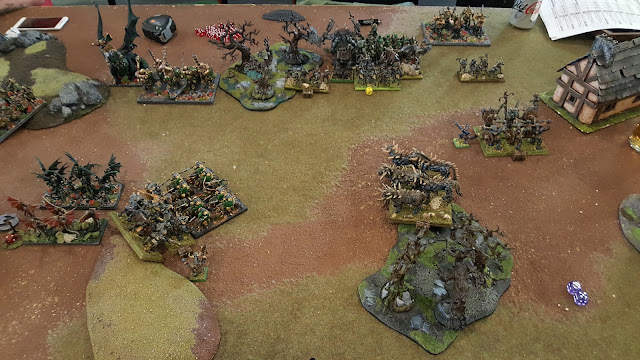 As it happened they did survive and struck back routing the Slaves. 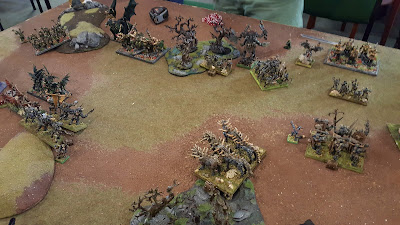 However my left flank now felt very exposed to the Halfbreeds and the Grotesques, both nasty units. 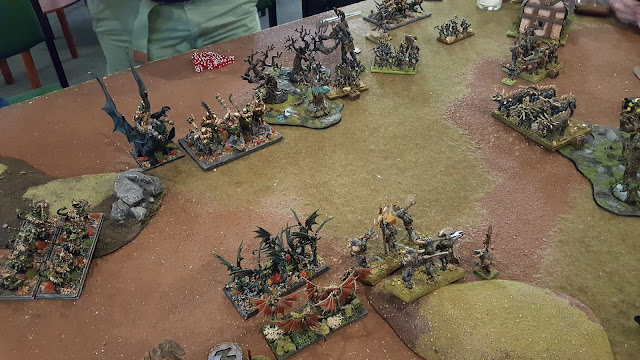 The Harpies which I could have used to cover the Brutes giving me a bit of breathing space were Wavered meaning they could do very little. 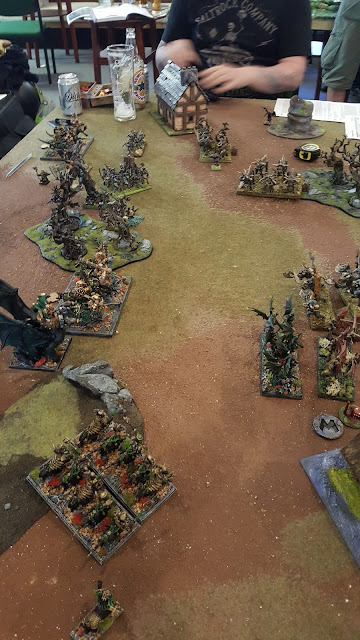 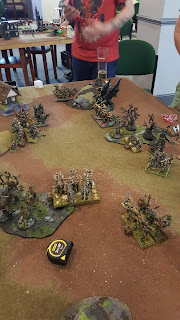 This is the moment when all those concerns come together and see the demise of my left flank, blimey talk about a mugging! 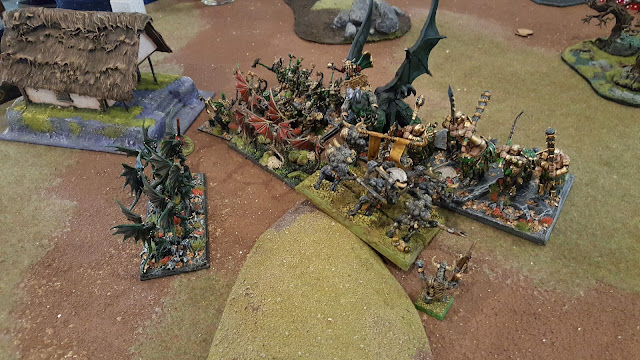 On the right flank however things were looking better, the Darksouls were no more, but I found it very difficult to get my General the Avatar to get out of the way of the second Grotesque Horde. 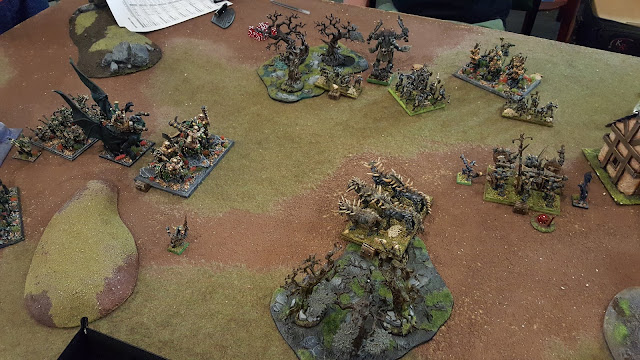 I could see that the Stampede would be multi charged next so moved them back just 3.5 inches to remove them from charge range, unusualy thoughtful of me :-) 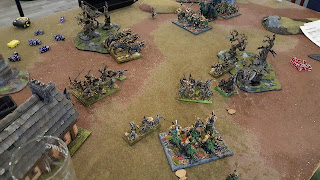 I also turned the Brutox (middle top by the trees)  round to face into the game and threaten any units that moved across the battlefield. 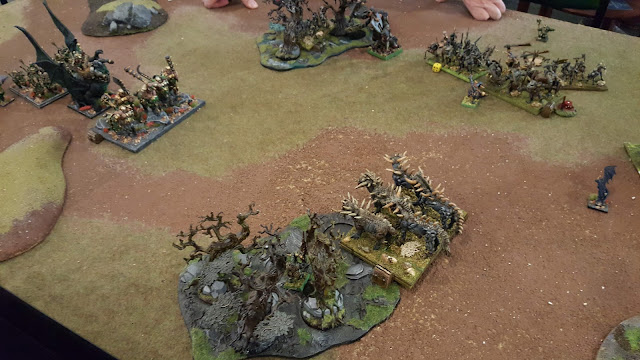 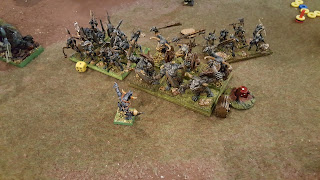 I had a turn to try and get some of my more strung out units back into the game. 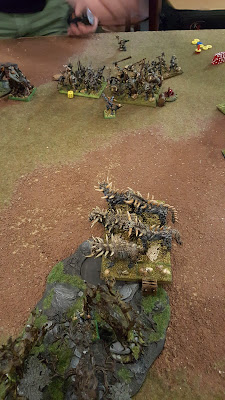 Fearing the Brutox, Steve charged his Overmaster on his dragon at him, he would have to do well to despatch him. 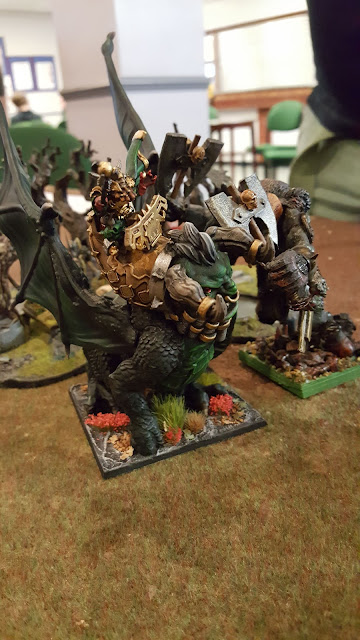 Steve's Abyssals rounded on the stampede. 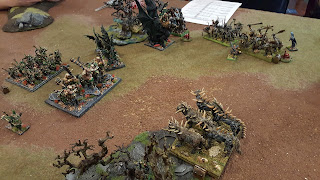 The Brutox survived the first combat with the Overseer and was supported by the Spirit Walker regiment and between them they killed it. 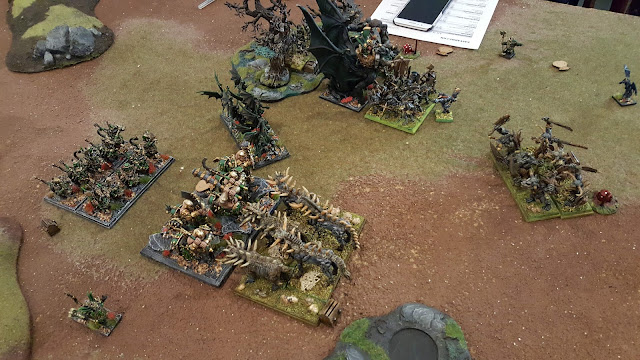 Now in the centre of the field the Stampede took the charge from the Grotesques and narrowly survived, by just one point I think! 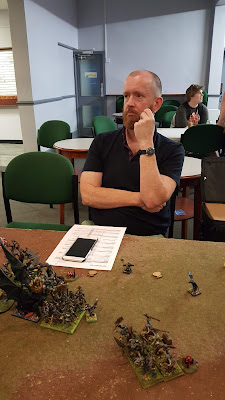 Steve contemplating weather to have another Newcastle Brown. 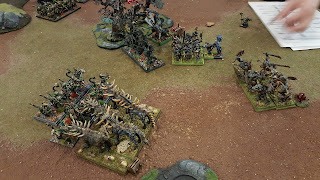 The Stampede hit back at the Grotesques and rout them, and after some healing, I believe, take another charge from the Halfbreeds and a Champion, before Wavering them. And with the Abyssal Dwarves in a poor position with very few tokens Steve called the game a victory for the Herd. 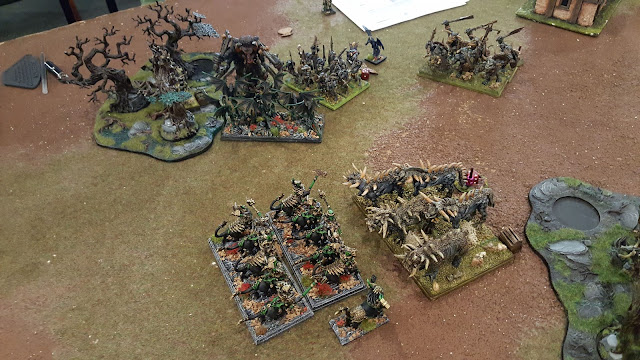 I was amazed, me beating Steve does not happen often, so this game will  be enblazened on my brain for the next few months. 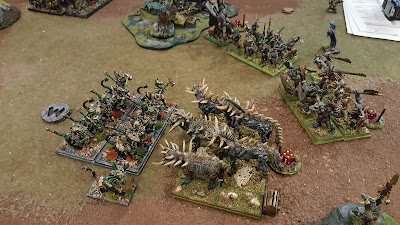 It was a great game which I enjoyed very much cheers Steve.