Gaslands: Blood on the Tracks 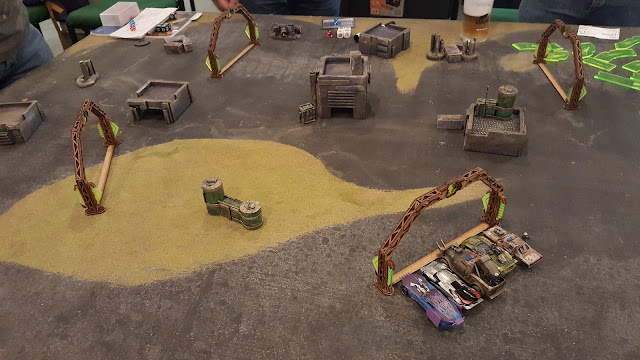 Last night played my first game of Gaslands with, Mike, Fran, Luke and Steve. We played with one car each, the Death Race scenario and we had an immense amount of fun, so much that we lost track of time and I missed another appointment... Sorry Stan. 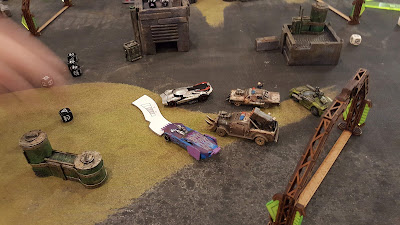 Before I get too far into this I would like to say a big thank you to Fran for holding our collective hands while we played, without him it would not have happened.

First gear saw the other guys bunching together heading for the first gate. I really could not get down there so headed out the other side of the building in the middle. 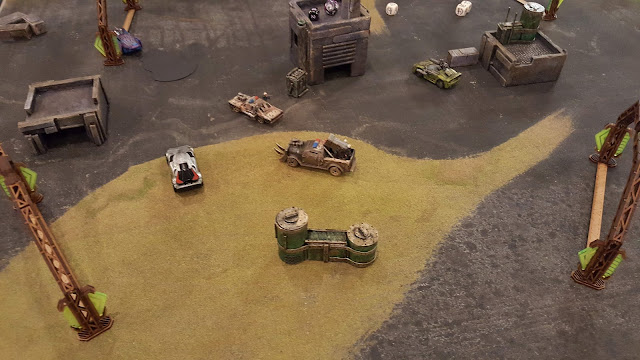 I think what happened here was that Steve tailgated Mike, sending him skooting forward because he's a performance car. Mike then sowed the seeds of doom by dropping an oil slick on the course right next to the gate. 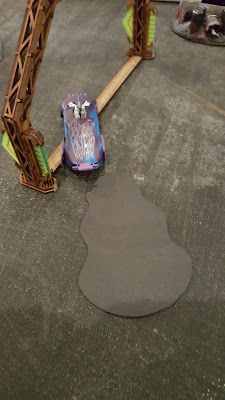 See where we are all headed towards? what followed was a fluster cluck of hugely funny proportions. 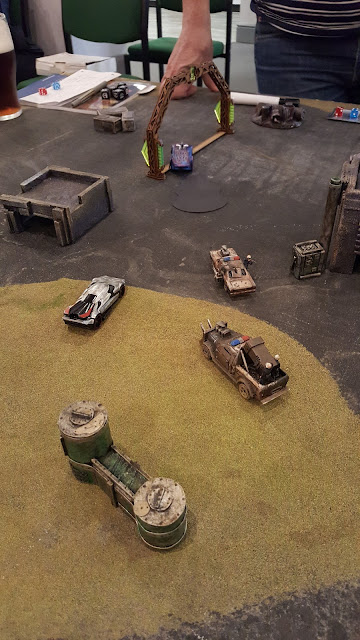 Steve, Luke and Fran all jostled for positions ahead of the oil. 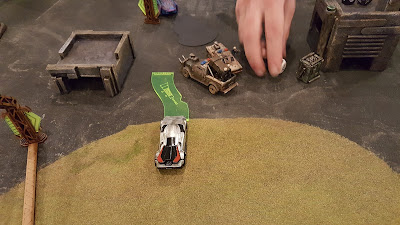 I thought I was out of the way. Thought! 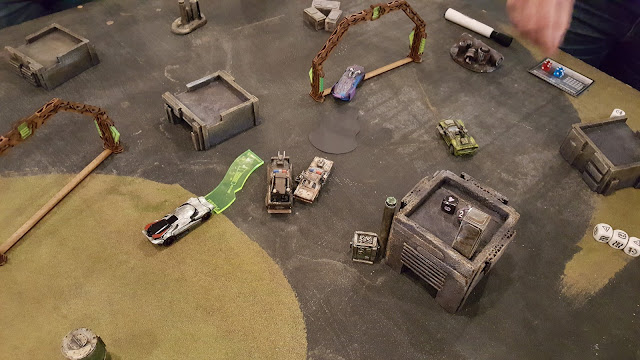 After several collisions which caused further mayhem I managed to get myself right in the thick of it directly in front of Mikes car, poor driving. 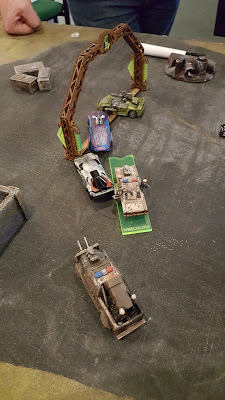 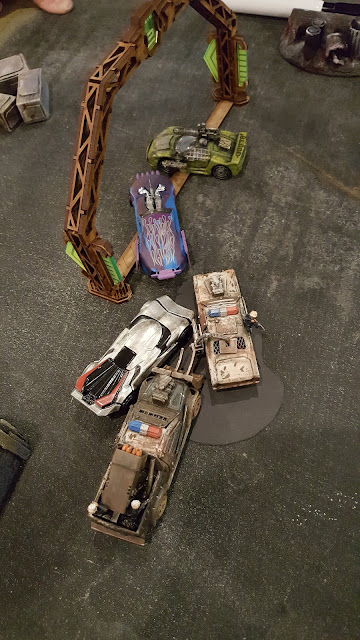 Frans collision at the rear of the group seemed to cause a ricochet effect right through to me. 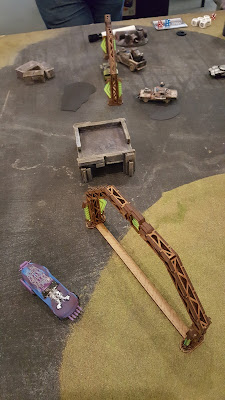 Mike laid some more oil, helpful chap, and then slipped away. Under the gate there was quite a bit of manic shooting, laughter and horror, was great fun. 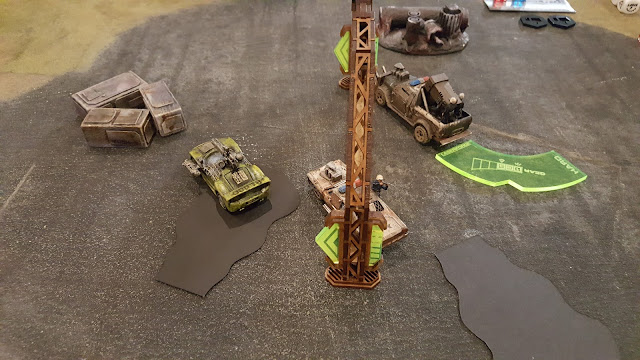 Then Luke chucked a grenade at Steve, destroying his car, but the explosion reached my car and caused that to explode as well! 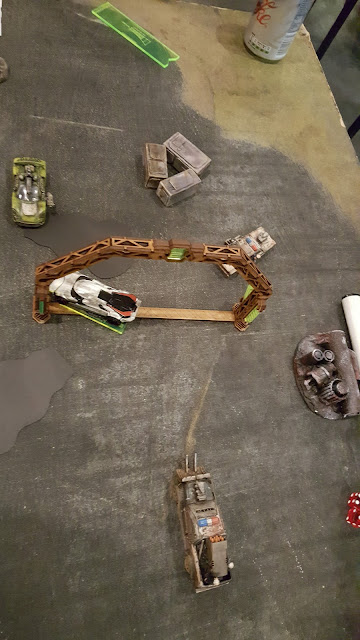 As you can see we were no longer in the race. Mike on the other hand was getting well away. 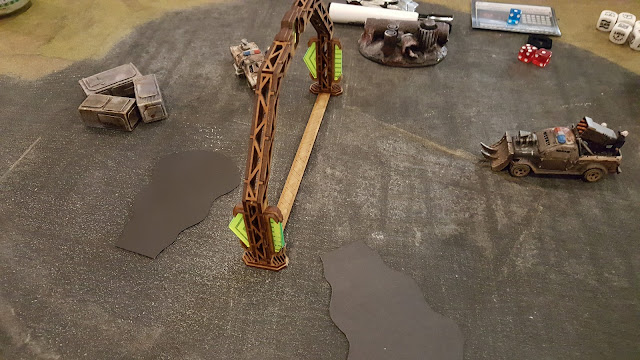 I think that it was at this point or shortly after that Fran's weapons came online and he rocketed Luke to smithereens. 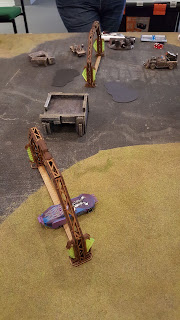 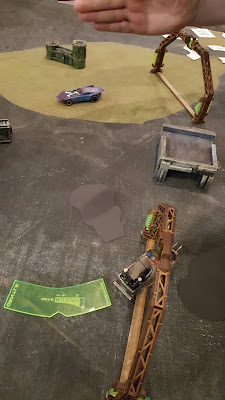 He then headed towards Mike and did the same to him, stopping him from reaching the finishing line. 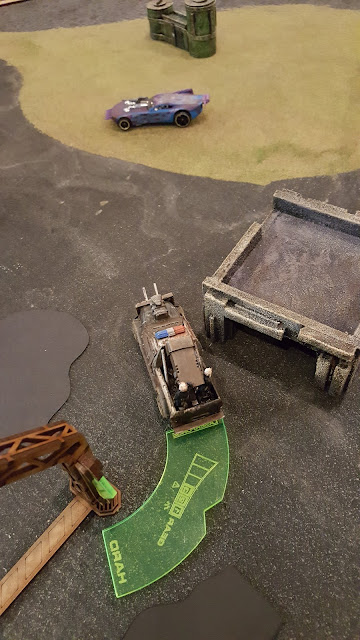 So with Fran, sort of, the winner, he was the only car left, we called the game. It had gone 11 pm and was time to go home.
I really cant recommend Gaslands enough it was a really fun game and when I understand collisions and flipping a bit better I will be playing as often as I can.
Cheers to everyone who played, especially Fran and to all of you thinking of having a game, do it now. 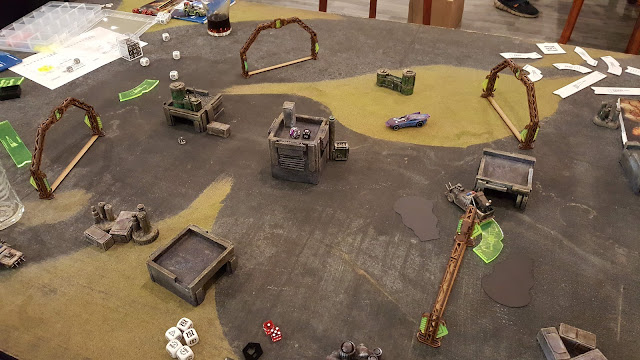