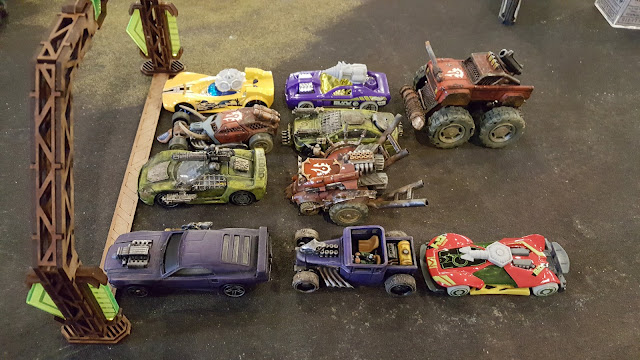 Gaslands Death Race, involving Fran, David, Steve, and myself, 50 cans per team, although I think Steve and myself may have had a few points left over. Mine are the 2 green cars and Steve's are the purple. Fran is running the 3 multi coloured cars and David (on holiday from Spain) is running the very nice rusty red numbers with hand painted logos and with pipes akimbo. 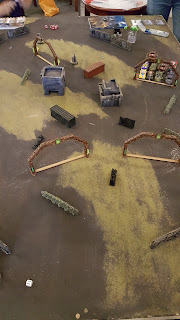 Massive series of rucks for the first gear moves. 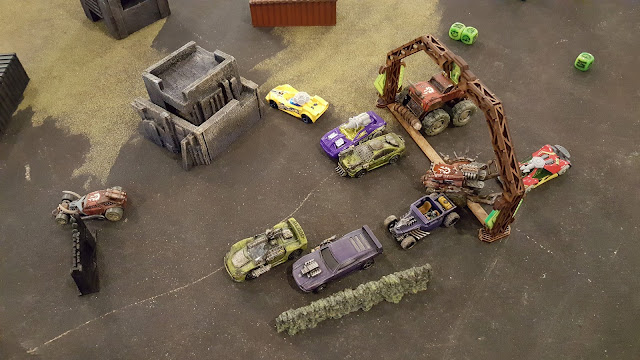 As my sponsor was Team Idris I had nitro boosters and hot start which allowed me to start in 5th gear, very useful. Although I never got to use the boosters. 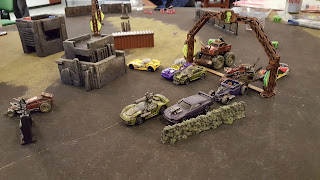 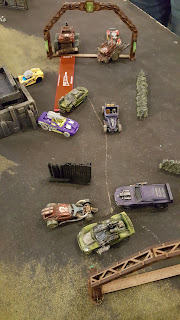 David's truck just ran over us all, great fun and atmospheric. His buggy, not picture in collision, ran straight into the building and was wrecked unfortunately. 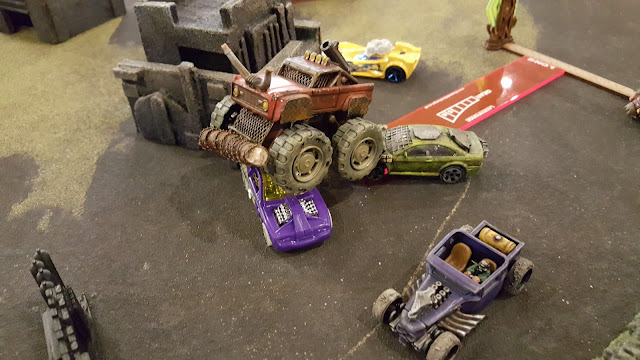 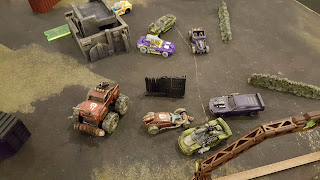 Steve's and my performance cars had originally pulled away but the field were pulling us back in. 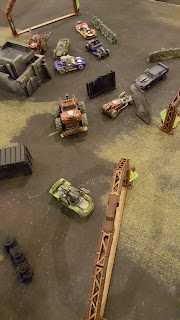 I managed to slip through while Steve had to deal with a head on collision, which he did, taking minimal damage. 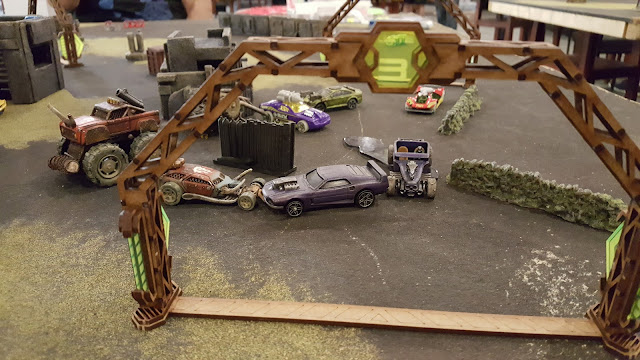 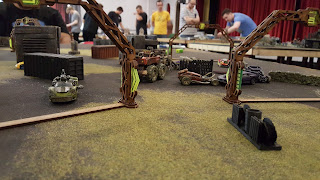 I managed to get through the first gate, but was in 5th and struggling to round the bend to head for the next. 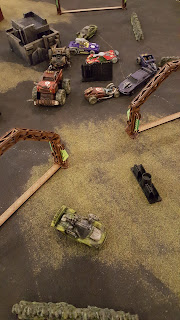 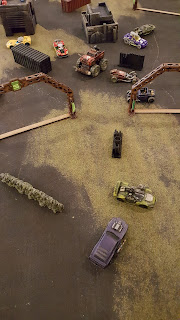 Steve pulled off some true stunt man moves and slide round beside me. 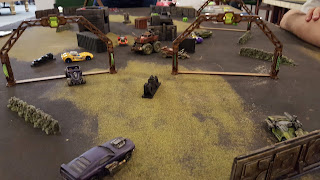 And while the rest of the field struggled to get past each other, so much terrain Fran!!!!! Steve put peddle to metal and sped away. 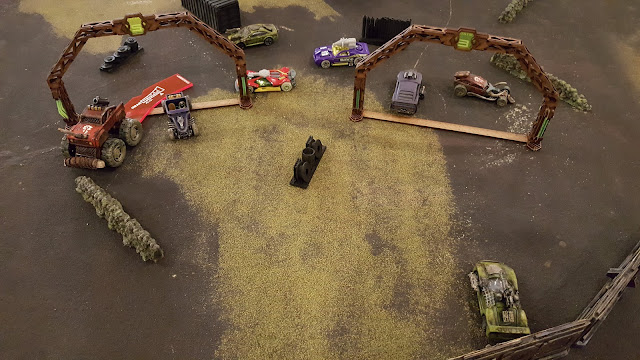 While we were figuring how we would avoid all the buggies ahead of us, Fran and David were busy beating the living daylights out of each other. 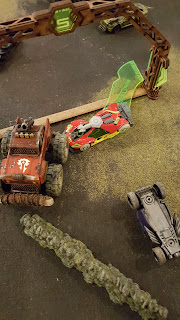 The upshot of which was that Steve's buggy was wrecked and Fran's car was destroyed. 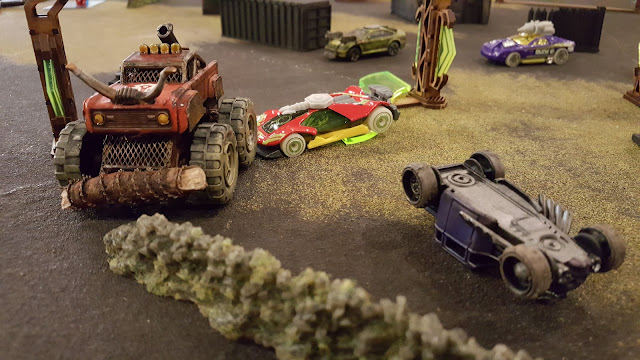 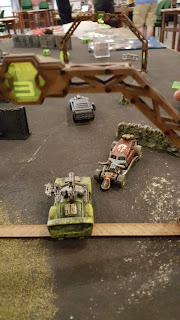 I managed to slip through the gate and avoid David's buggy, while shooting with my HMG to no avail into the rear bumper of Steve's Performance car. 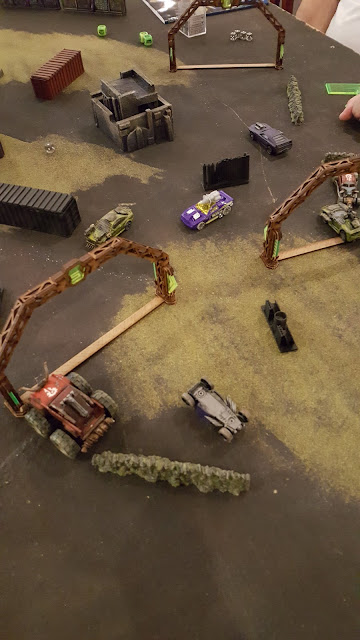 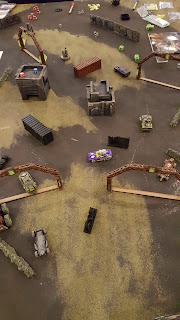 For a moment I came close and took another shot, but only did a couple of points of damage. 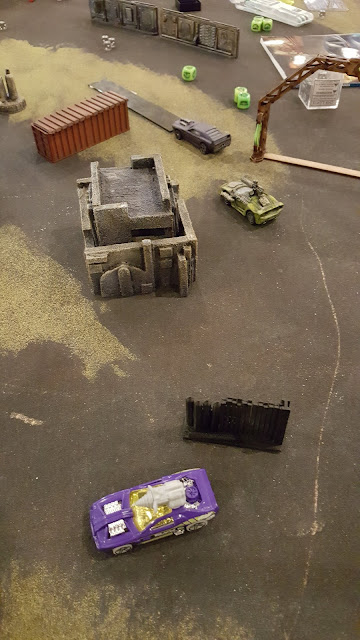 Steve then demonstrated why playing as a miyazaki driver can have such great benefits, he shifted into 6th gear and then hurtled over the finishing line in the wrong direction, pulled a slide to position himself to cross the line in the proper direction. 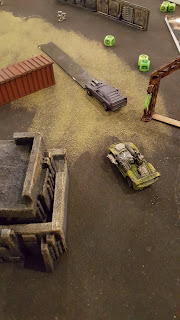 Notice how my car hasn't had a chance to move at all, this was because Steve had moved in 5th gear and then shifted to 6th to get another turn, I really missed a trick there, but I don't think I got the dice. 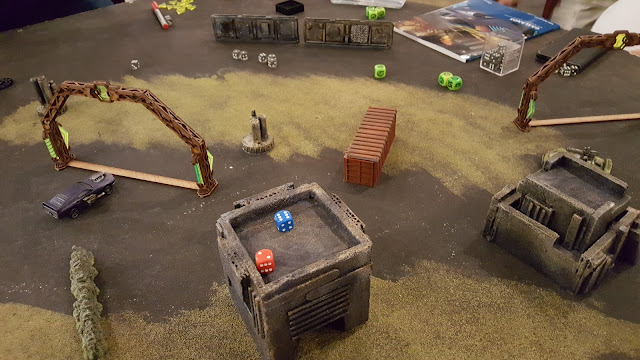 With that Steve was declared the winner as non of the other players could get anywhere near him and it was late. It was great to play a Gaslands game and get to the end, Steve played brilliantly. 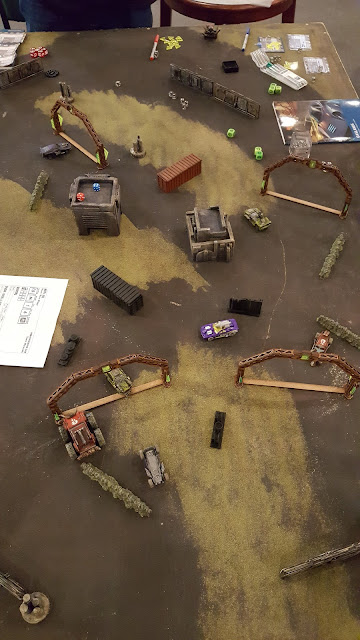