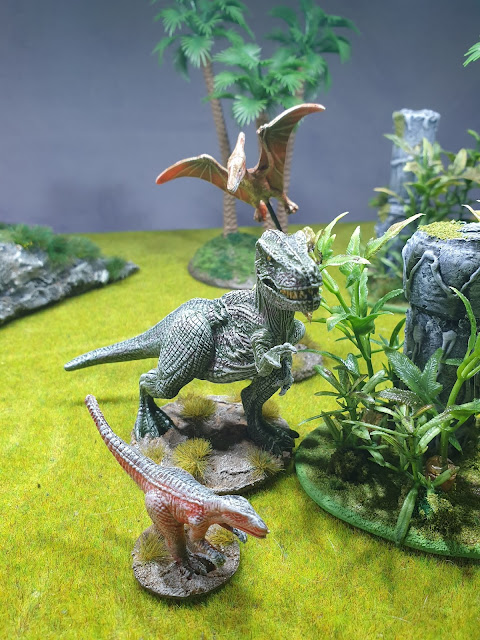 This last set of pictures is mainly about the larger Dinos, that I picked up from a couple of second hand shops, for pennies, probably £5 for the lot. 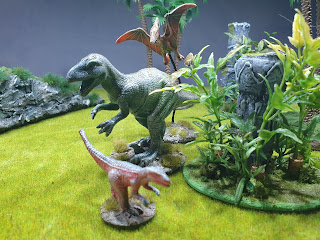 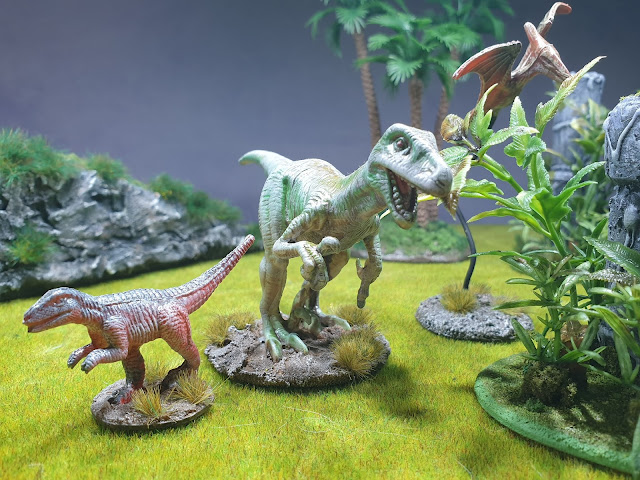 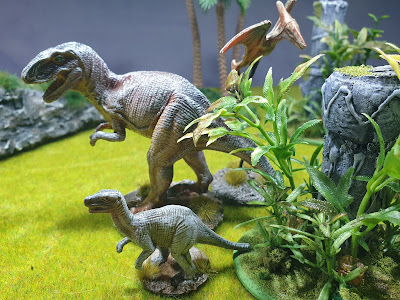 Pretty much the same size but of varying quality, some didn't make the cut as they looked too cartoony and toy like. These were ok, so a coat of paint dry brush and wash over the top, as per the smaller critters in the other 2 posts. 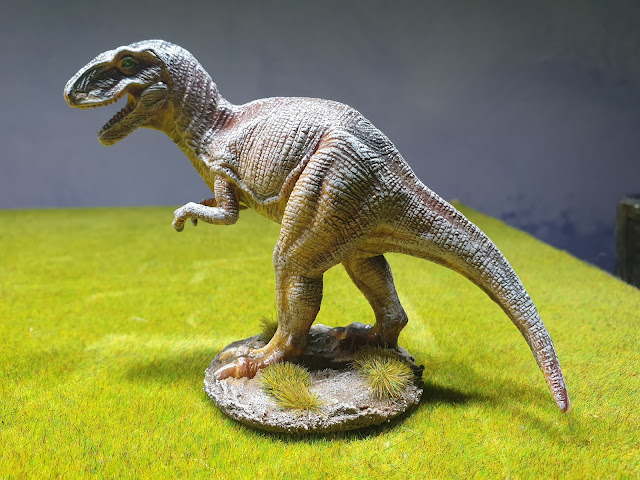 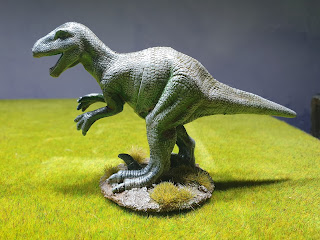 The lower one had pose-able limbs, so I glued those. 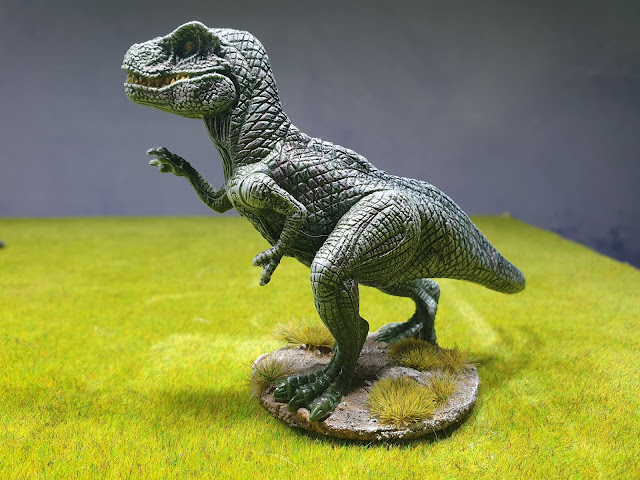 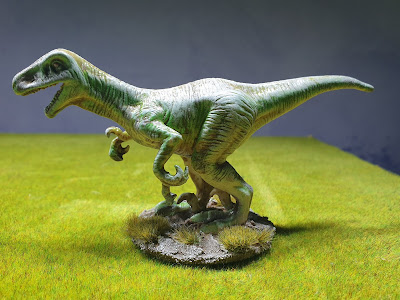 Very cheap, quick to create, but took some time to collect. Patience was the word, but then I never had a date when I knew they would be needed for, so wasn't a problem really.

So that's it there will be no more dinosaur posts for some time now :-)
Yay!!!! 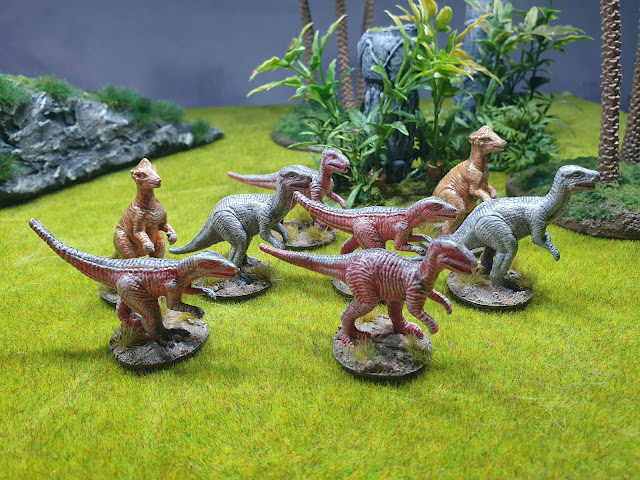 Not much to say about these really, they come from same boxed set of kids toys the Pteradons came from and so were very cheap. Still have loads in the box that may get used in the future. 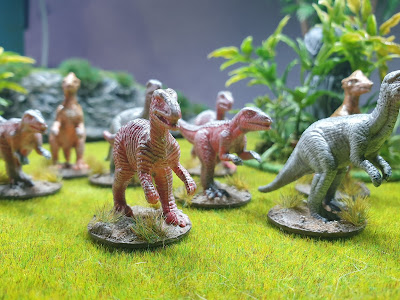 Not dynamically posed and not terribly exciting, but cheap and cheerful. When there is a really good chance I am never likely to use dinosaurs in a campaign ever again, cheap is where you have to go. 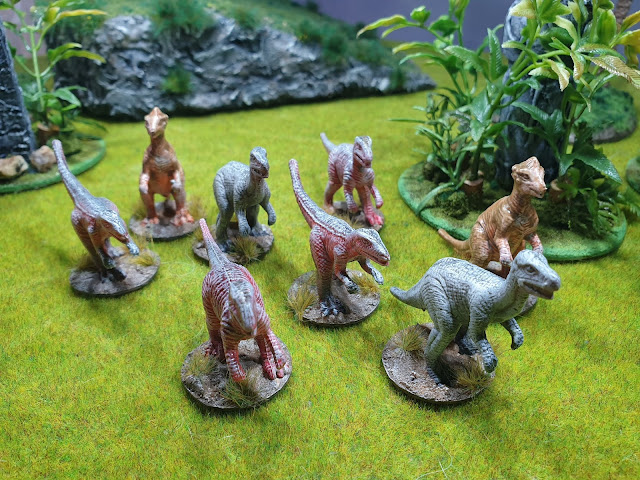 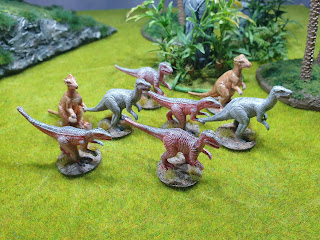 Some bases added and a lick of paint and a wash or two and they work OK. 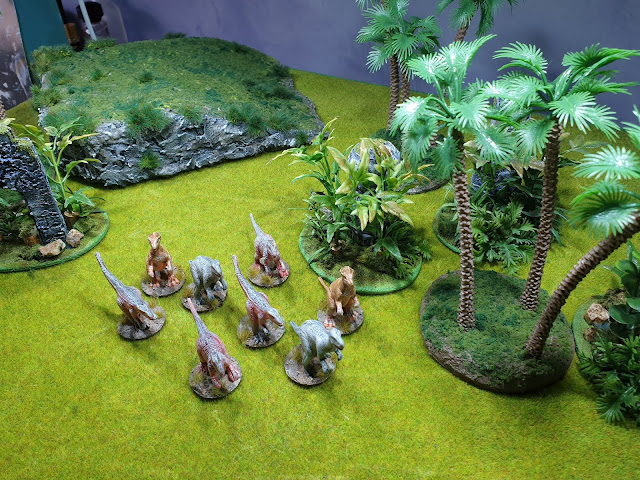 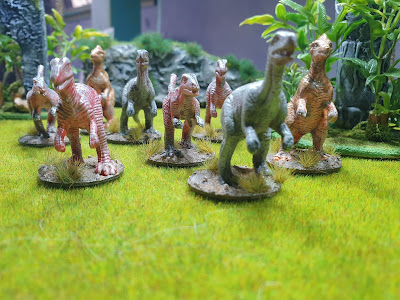 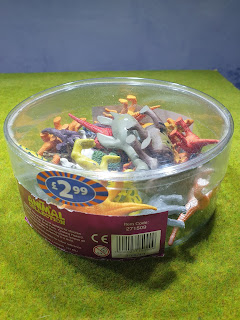 Can't really complain when I only paid £2.99 this tub of dinos have been in my loft waiting to emerge for 3 years now. 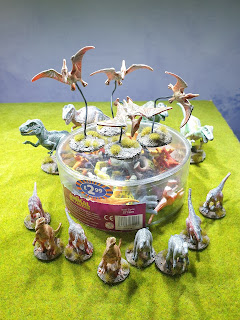 Last post in this group will be up this week, focuses on the larger cousins of this lot and that didn't come in the tub.
Cheers 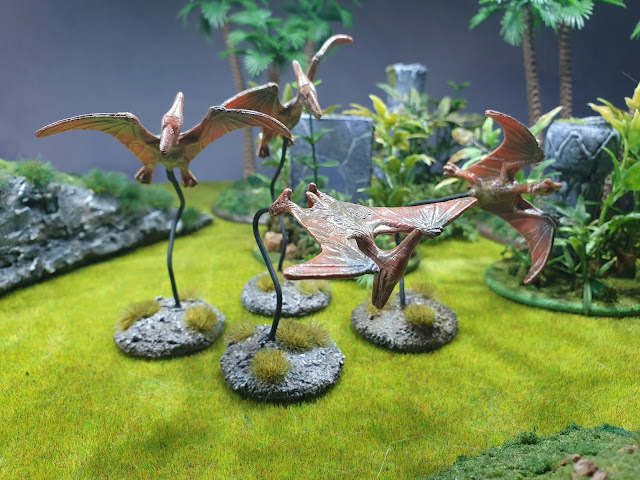 In last two months I have been running a whole series of D&D games set on a tropical island, named Dicush. So I needed some dinosaurs for encounters and one of the groups I made were these. 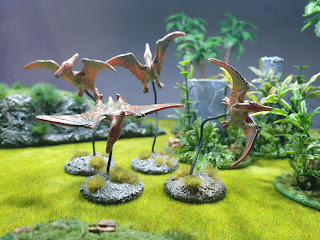 Very cheap, very nasty but did the job.
Apart from making the bases I did no extra sculpting on these, which will please Wayne
You reading this Wayne?
No extra sculpting.
Punch your Dad now please Nathaniel :-)
Thank you. 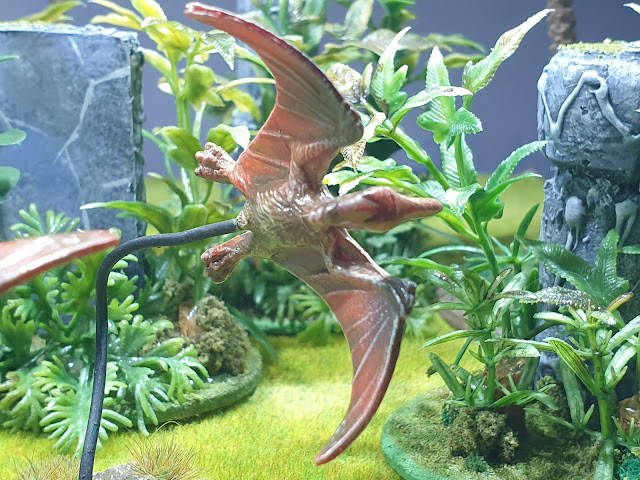 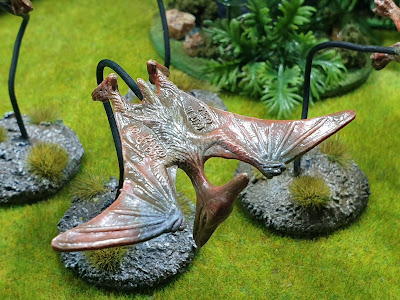 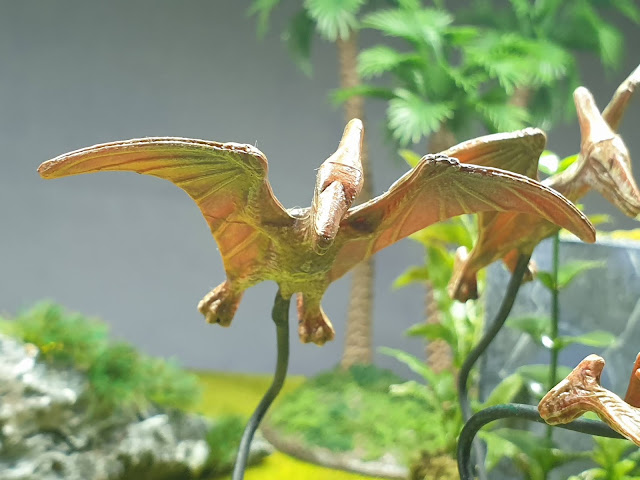 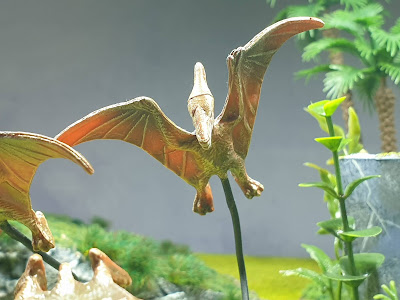 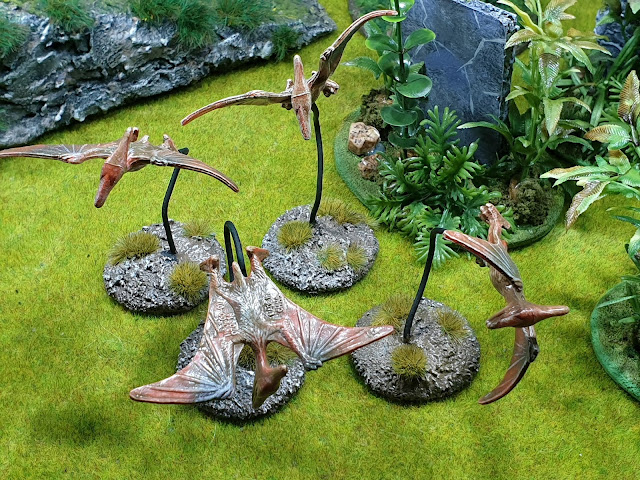 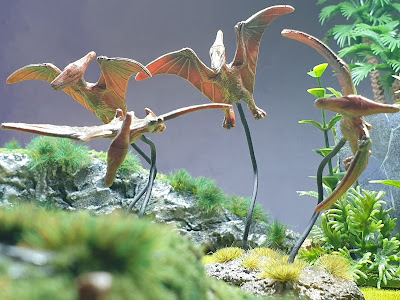 Oathmark: Battles of the Lost Age by Joseph A. McCullough

I bought Oathmark: Battles of the Lost Age by Joseph A McCullough the other day.
(The first plus was that it arrived very quickly, within 5 days of ordering.) 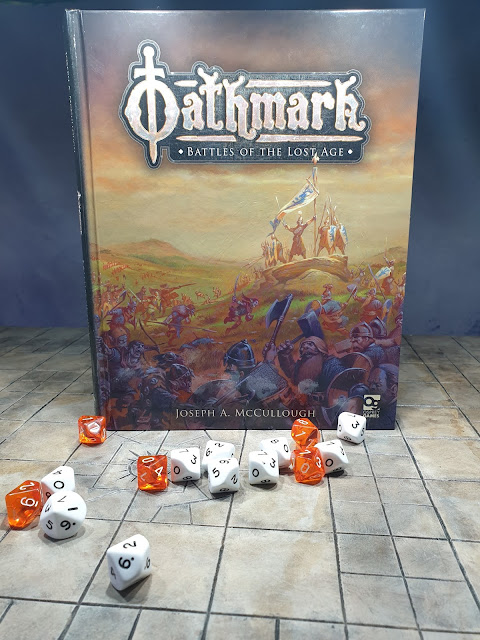 I have read the basic rules and it sounds a very interesting game, its clearly set out, and would expect nothing less from Mr McCullough and Osprey. I have much enjoyed playing Frostgrave off and on for the last 5 years and this lovely hard backed book delivers clear and concise rules without huge amounts of over complicated examples.

The system runs on a D10 set of dice and your not likely to ever need more than 5 of them at any one time. Troops are organised into units and models are removed from play when they become casualties. There is also rules for characters, monsters (this is fantasy after all) and even the ability to split units mid game, which will be interesting to read.

However for me the attraction of Oathmark is the campaign system which I am hoping will give life to interconnected games and promote story telling. 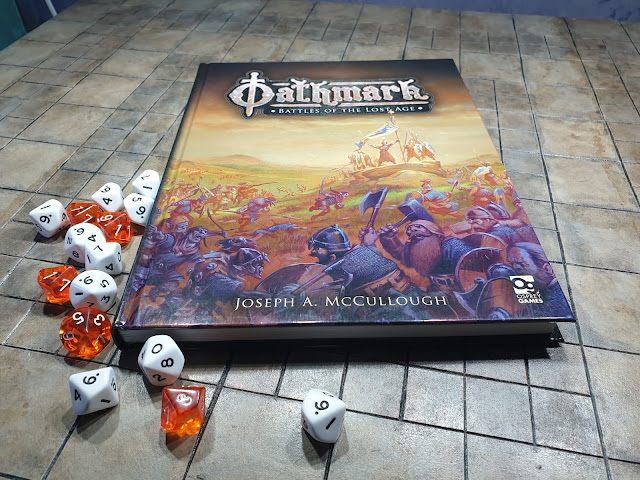 As I already play battle games like KOW and Saga I'm not exactly sure where Oathmark fits into it all, but I will certainly be trying out the rules with the figures I have and seeing how it plays.
If it grabs me anything like Frostgrave did its onto a winner and then I will have a crisis on my hands as most of my models are based for KOW!
North Star Military Figures Limited do a lovely range of figures for the game, Goblins, Humans, Elves and Dwarves, very reasonably priced. More temptation!
Anyway when I've read through the whole book and digested it thoroughly I'll try to give it a review in my own stuttering and befuddled manner.
Cheers Darryl
Posted by Darryl Hunt at 11:26 4 comments: