The SS Sulimann arrived at port on the planet Dubhe 0403 and its crew disembarked clutching their list of must do's whilst planet-side...
Kassel Leach was left to guard the ship, Vasily Barratt was sent to see what he could find in trade, and came back with a Dazzle Grenade, while Junke, Kratoon and Jazz went to find a patron and met Eugen Vandall, an alien renegade. Which led to...
Mission One:
Destroy the narcotics being grown on the secluded farm. Three fields need putting to the torch. Only after the crew had completed this mission did they begin to think that perhaps they had been used by their patron, Eugen Varndell to eliminate a competitor. Probably not a very nice competitor because they employed four Pirates to guard the farm, Marauder Pirates at that. 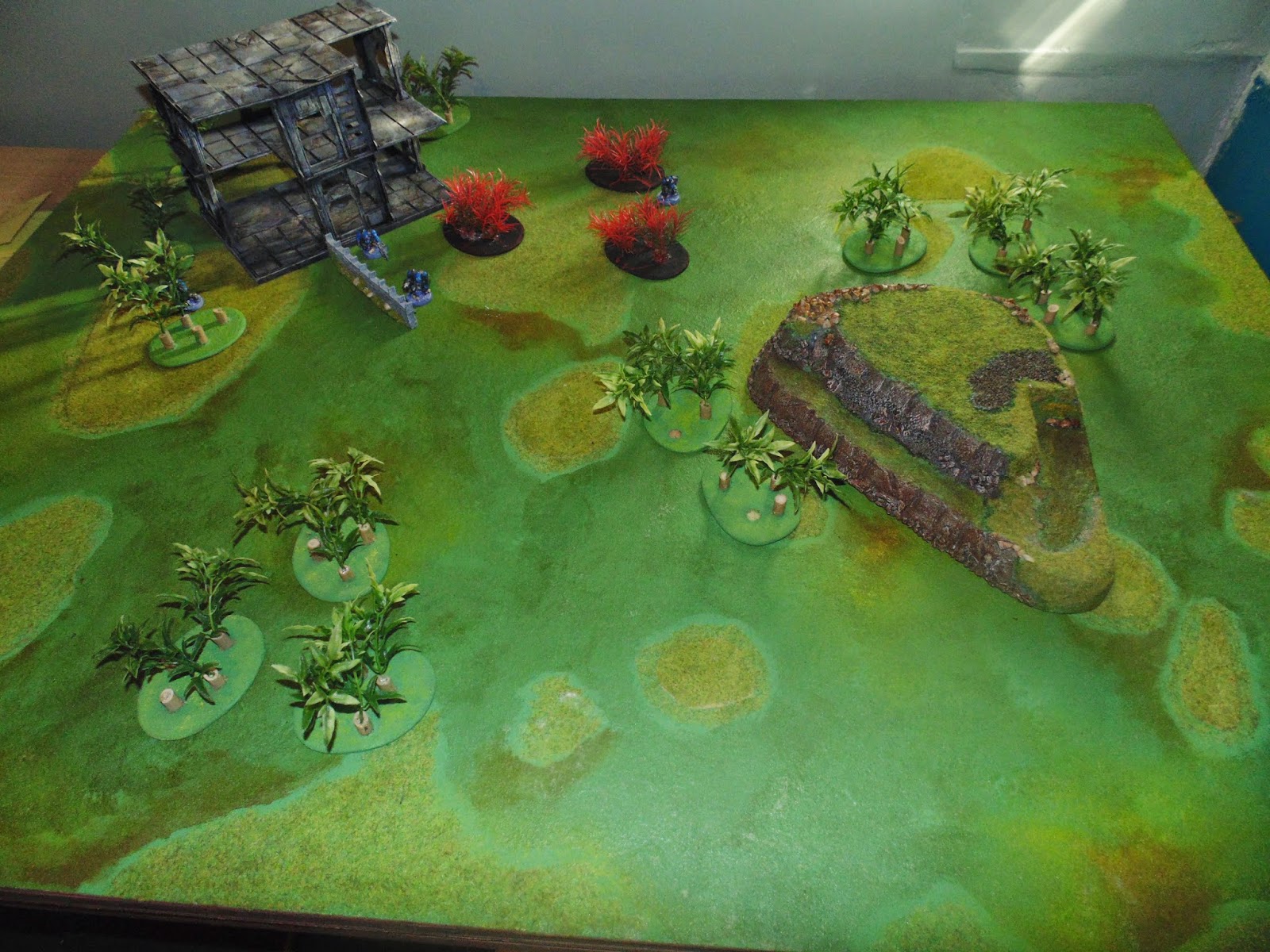 The farm with the distinctive red fields. 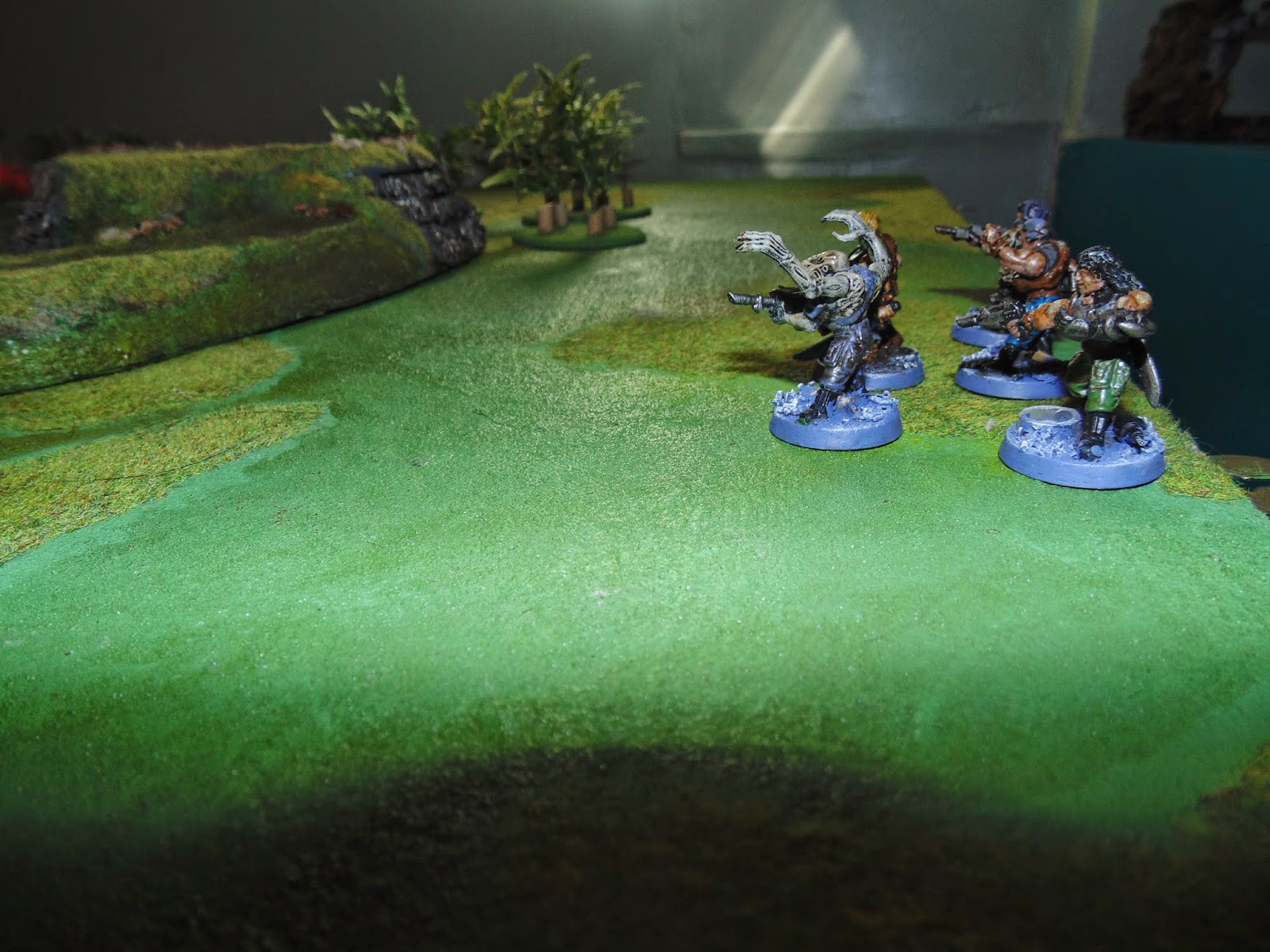 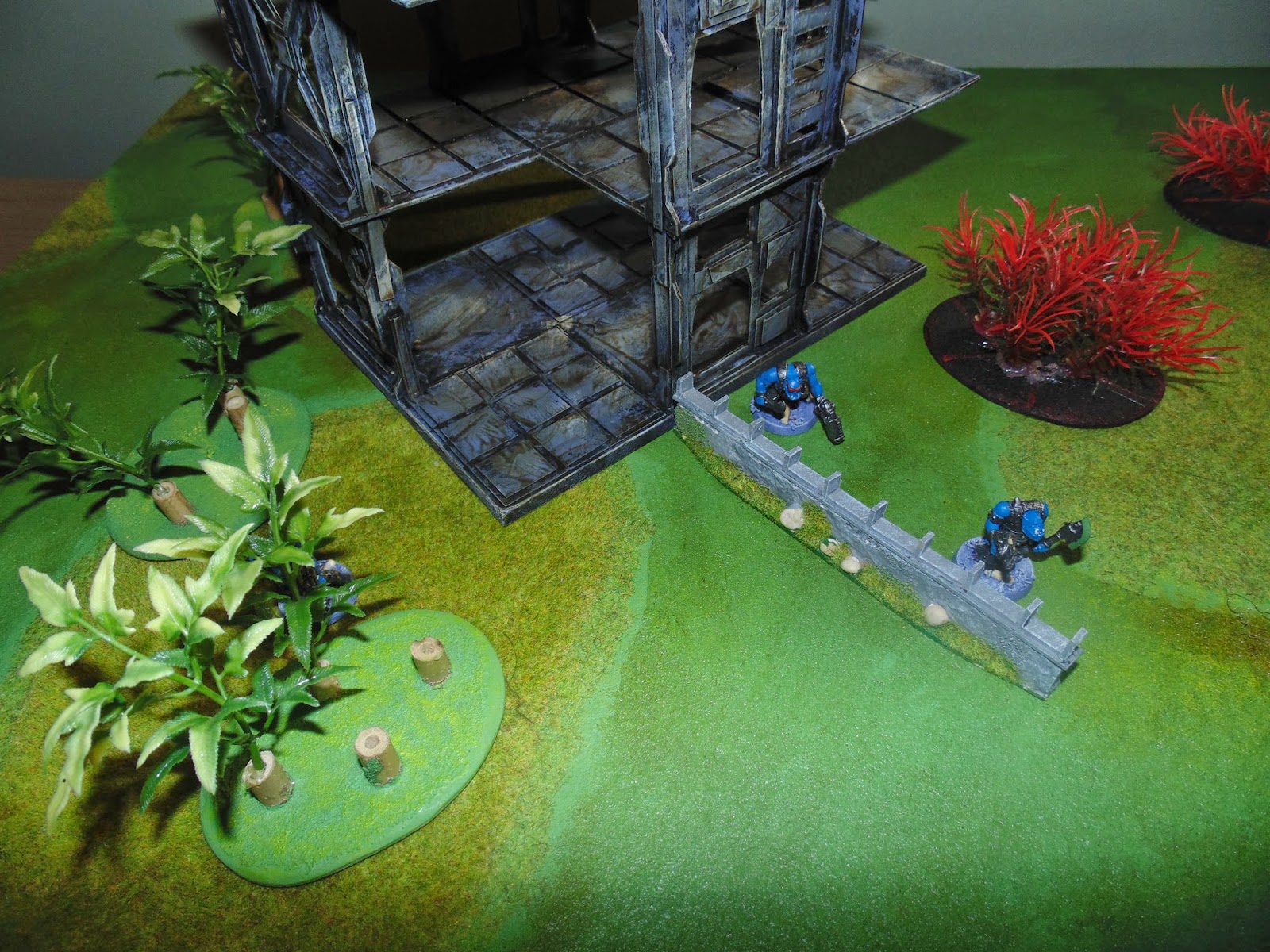 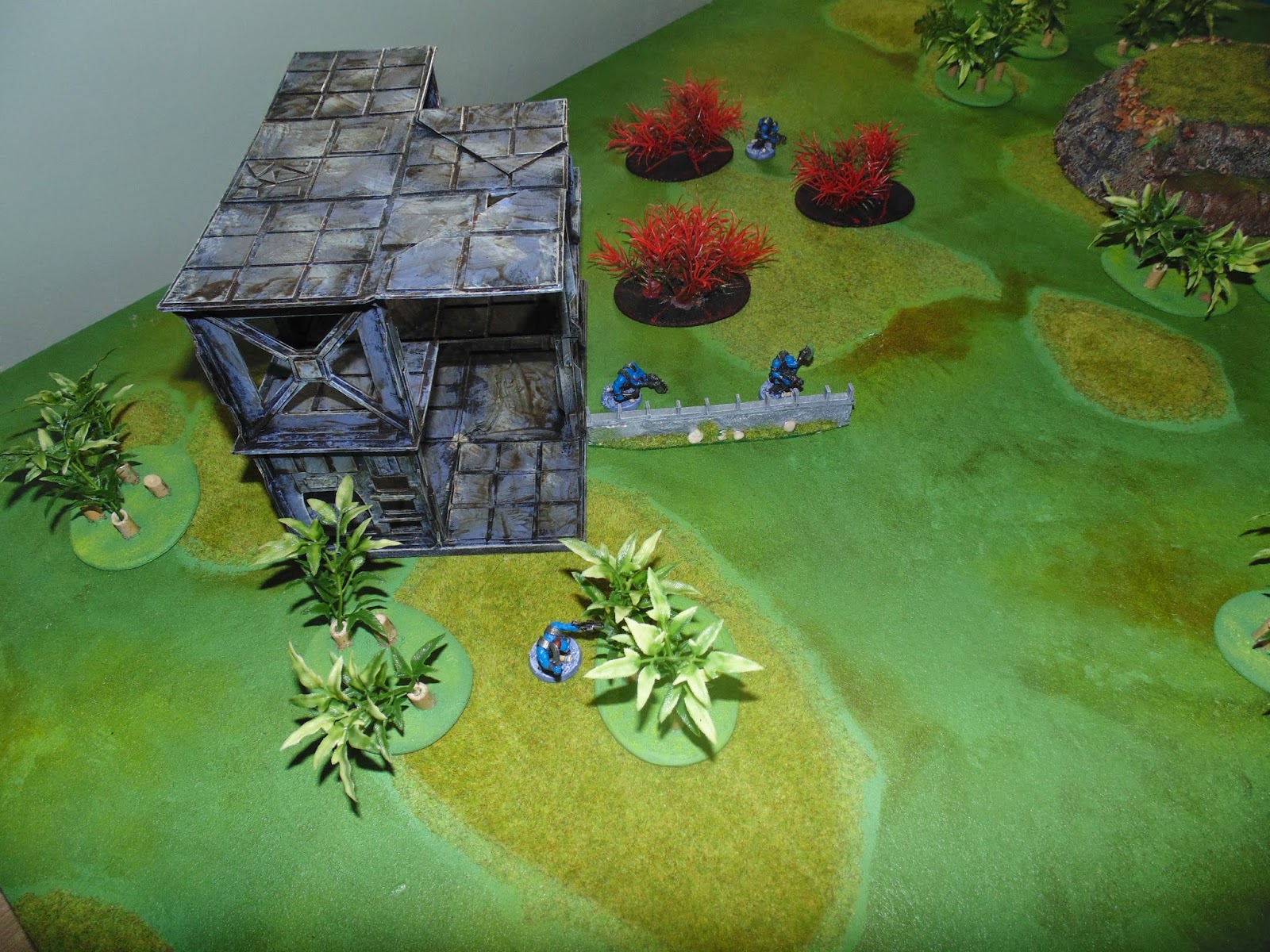 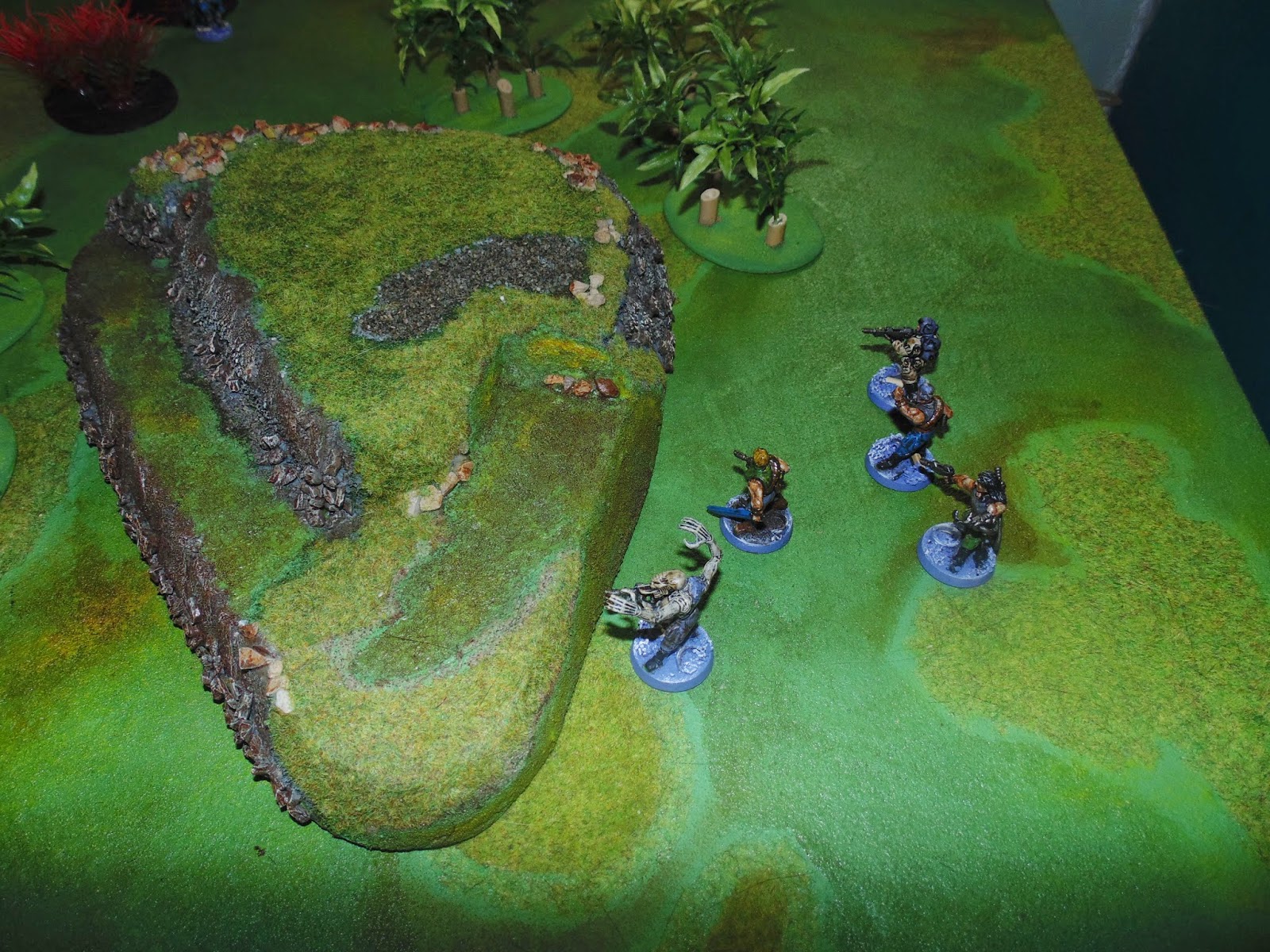 First turn went to the crew and was a Scurry move, so the whole crew moved up. 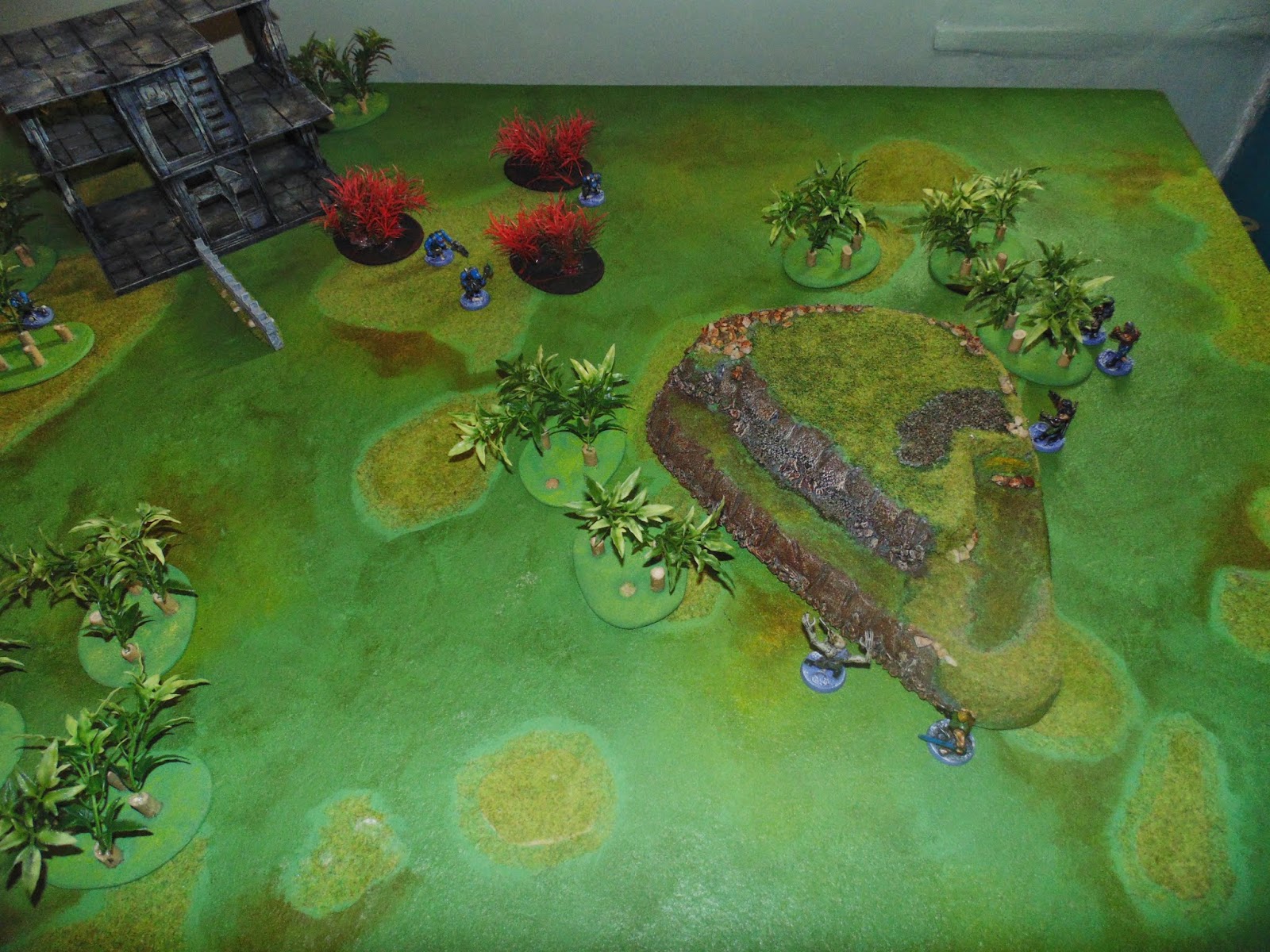 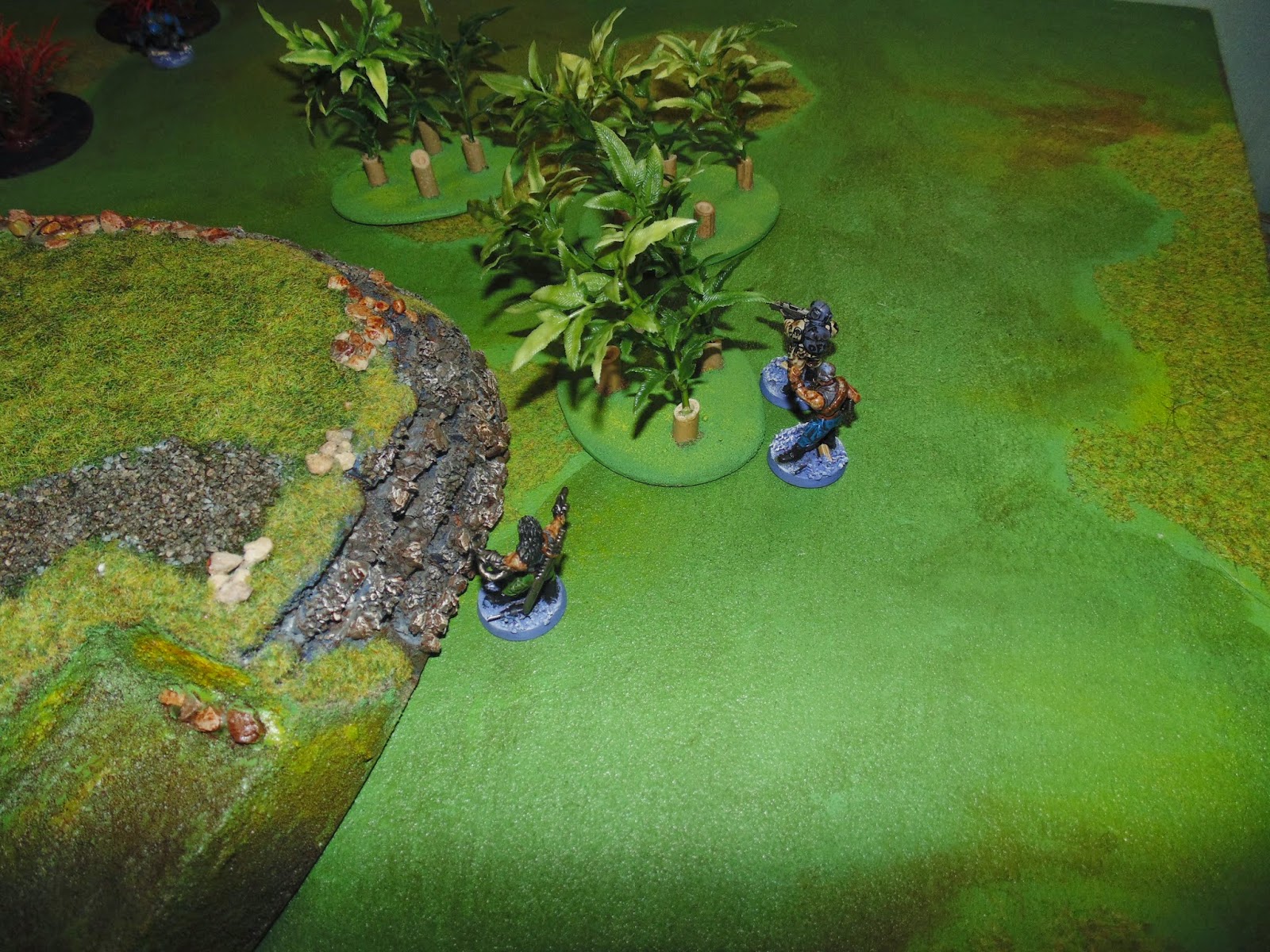 After the Pirates move 2 of their number, the crew Scurry again. 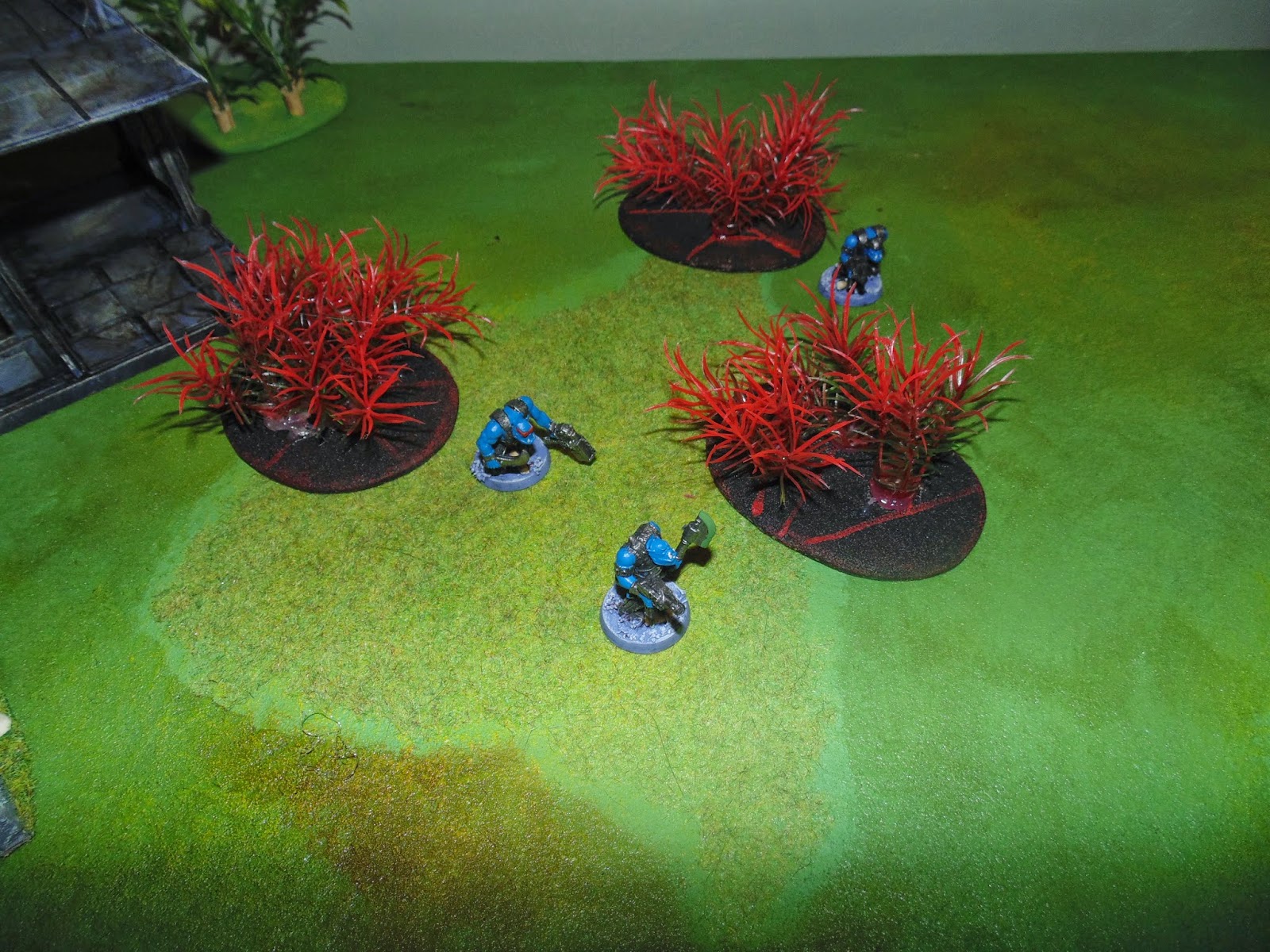 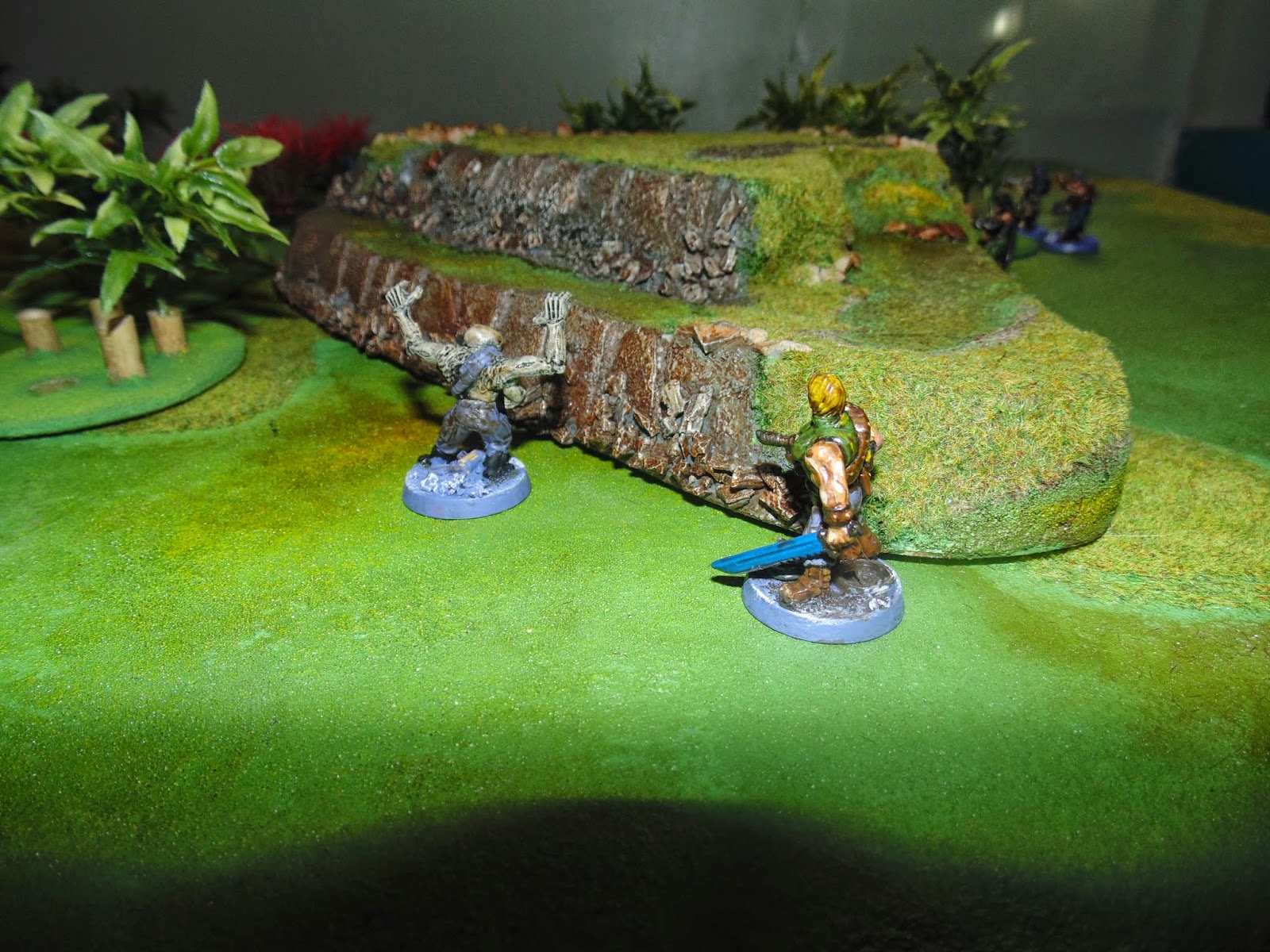 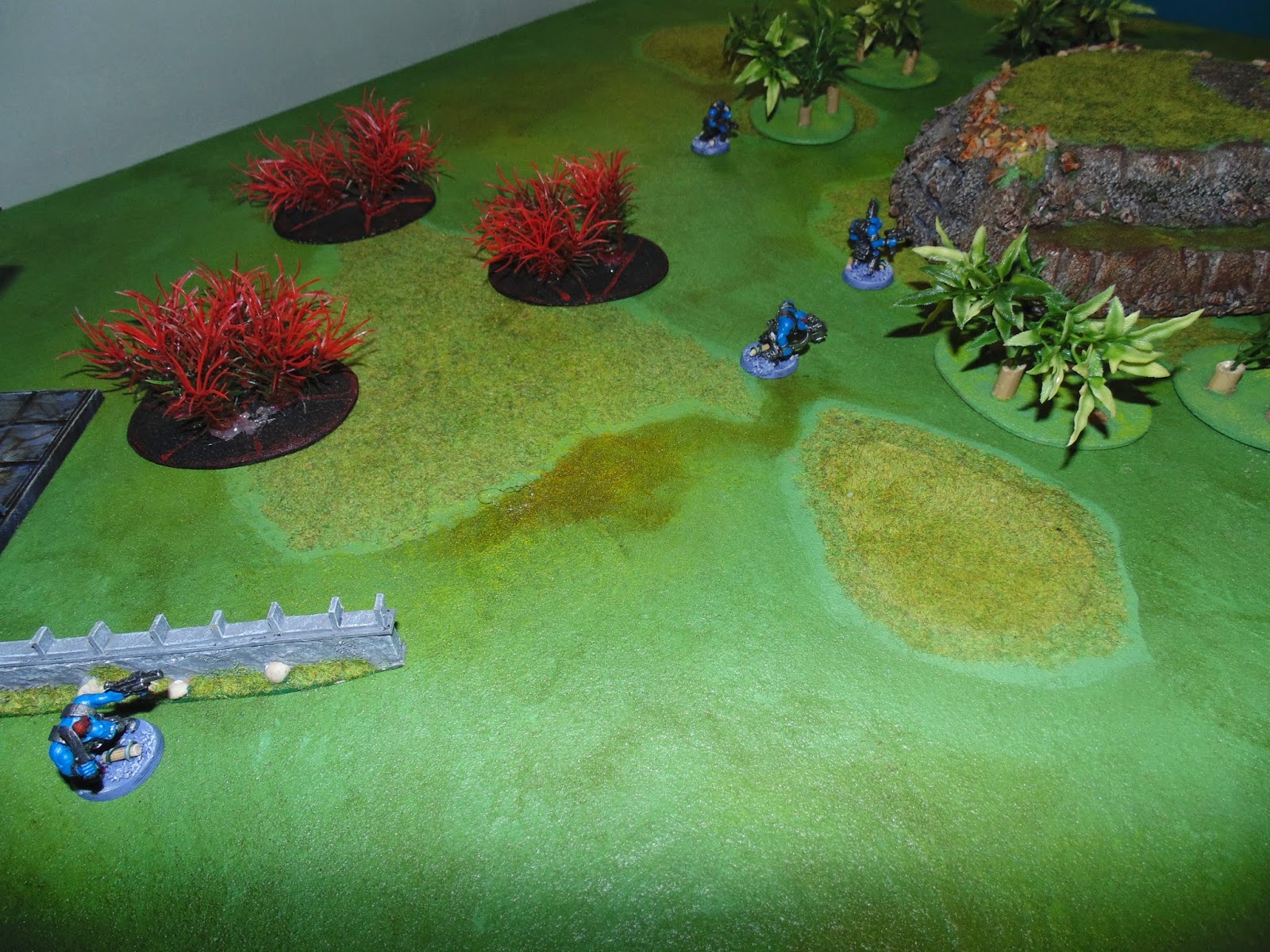 The Pirates decide its time to act, they Scurry too. 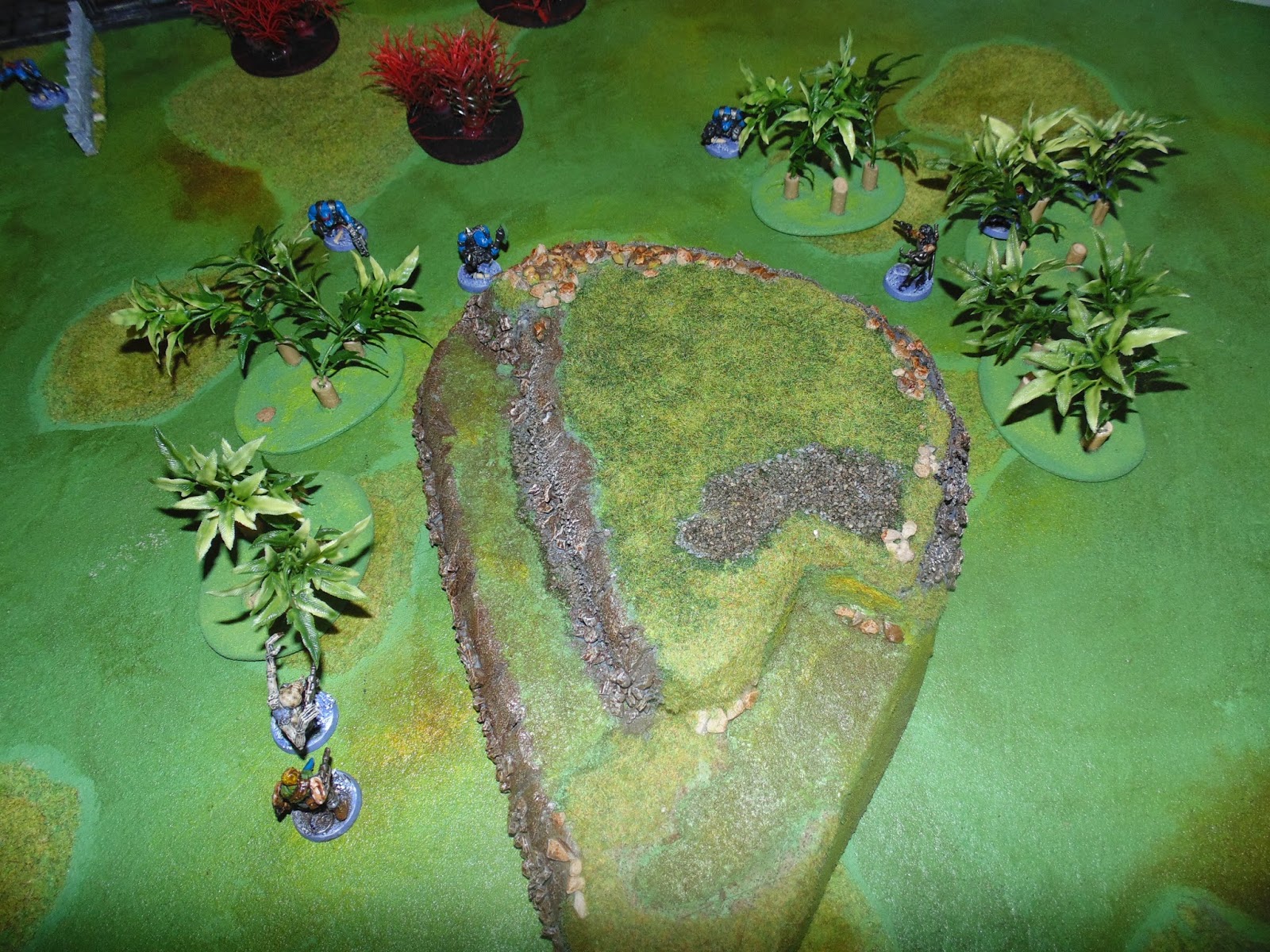 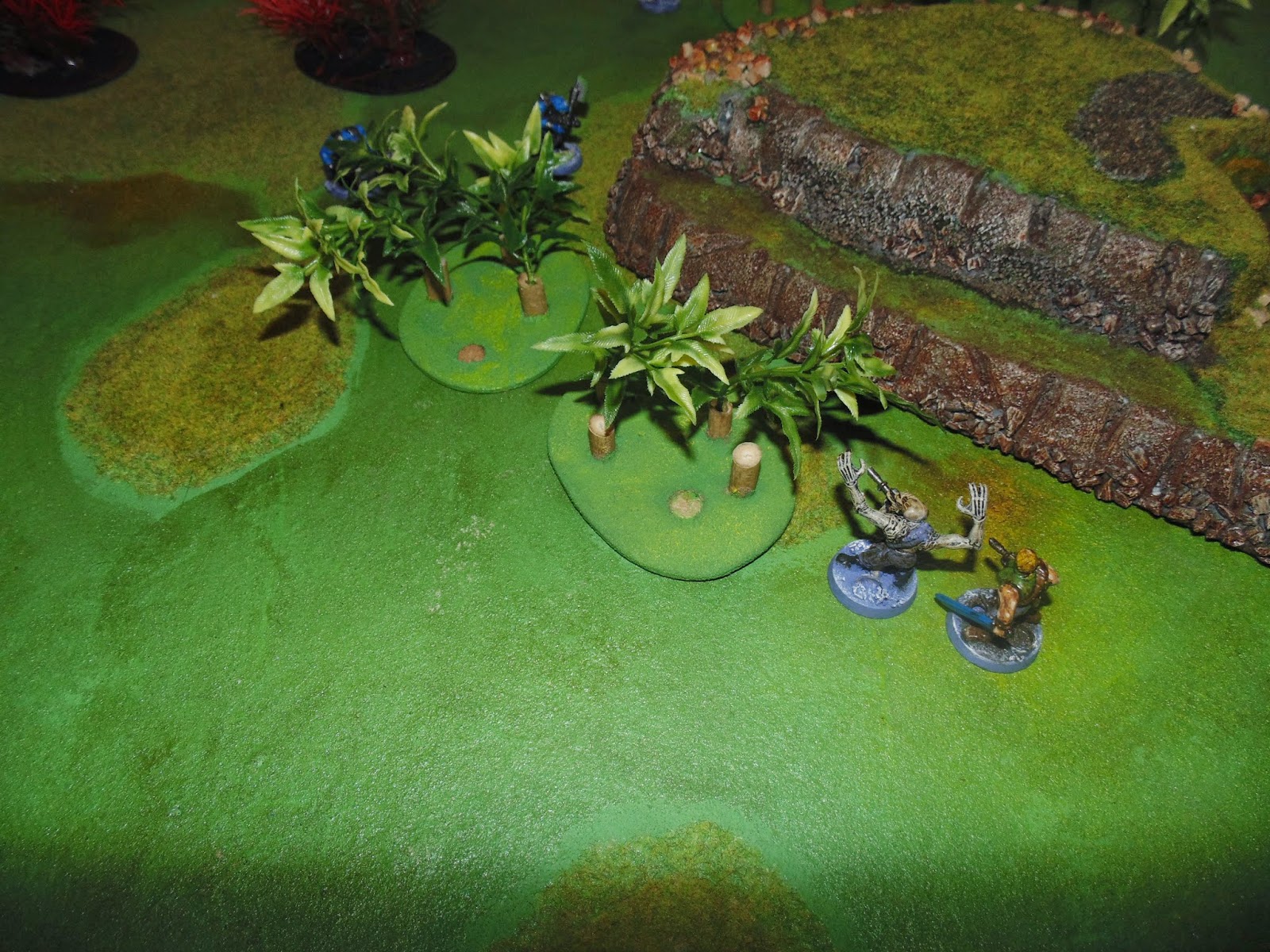 The crew got involved in afire fight, with little result. 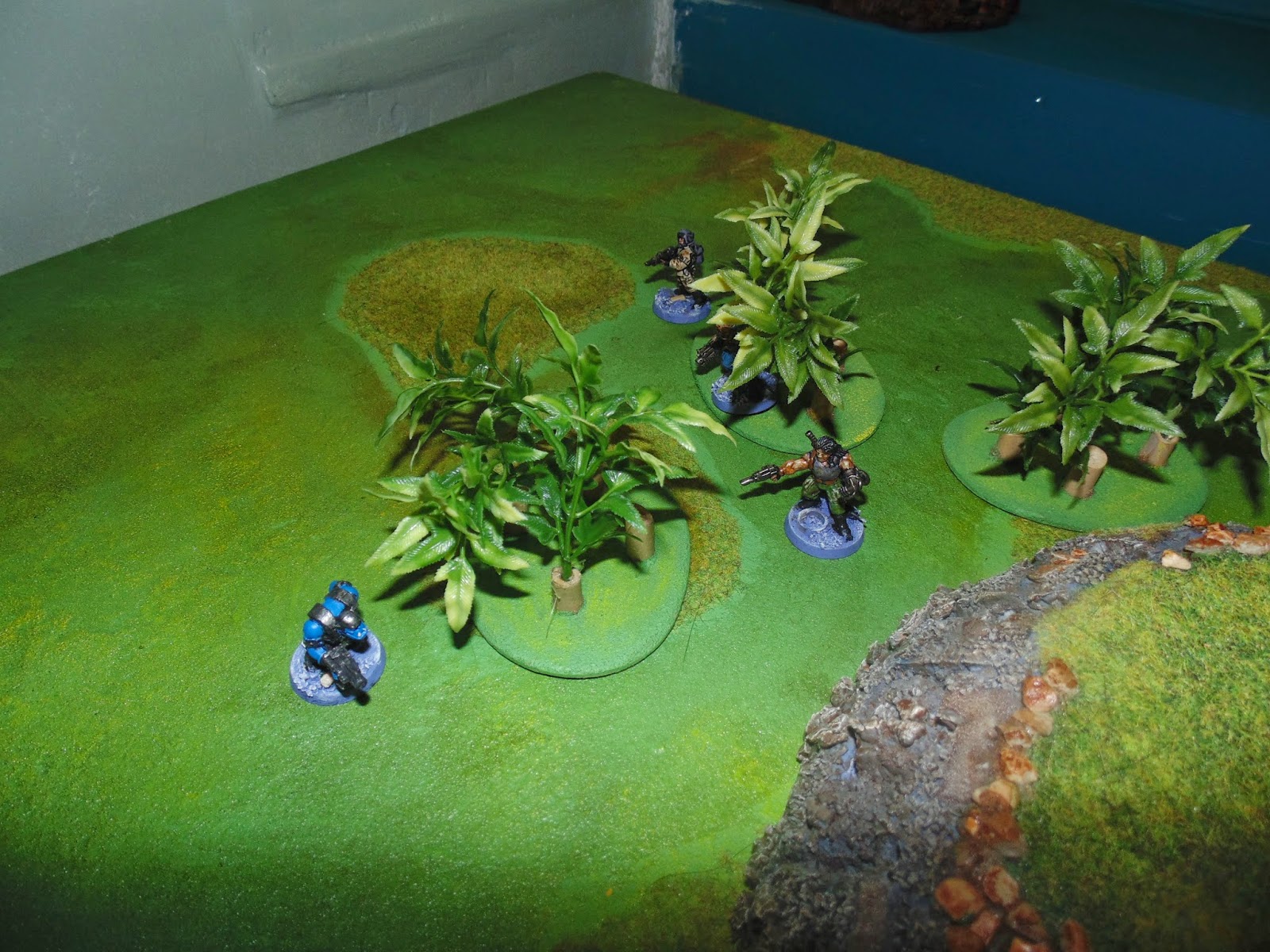 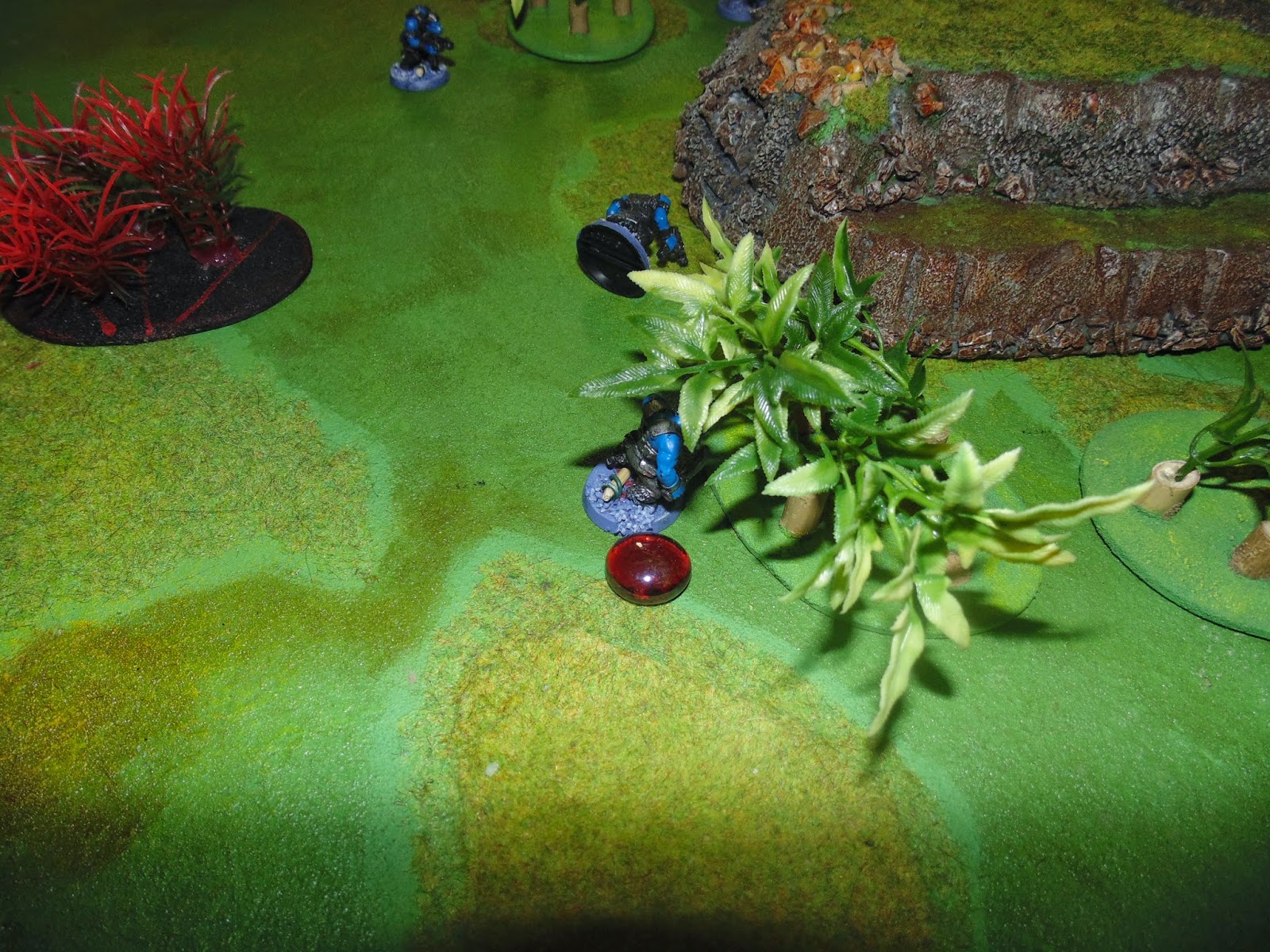 Junke and Kratoom move up on the Pirates, Kratoom kills one Pirate and causes his near bye neighbour to Flinch, hiding in the woods. 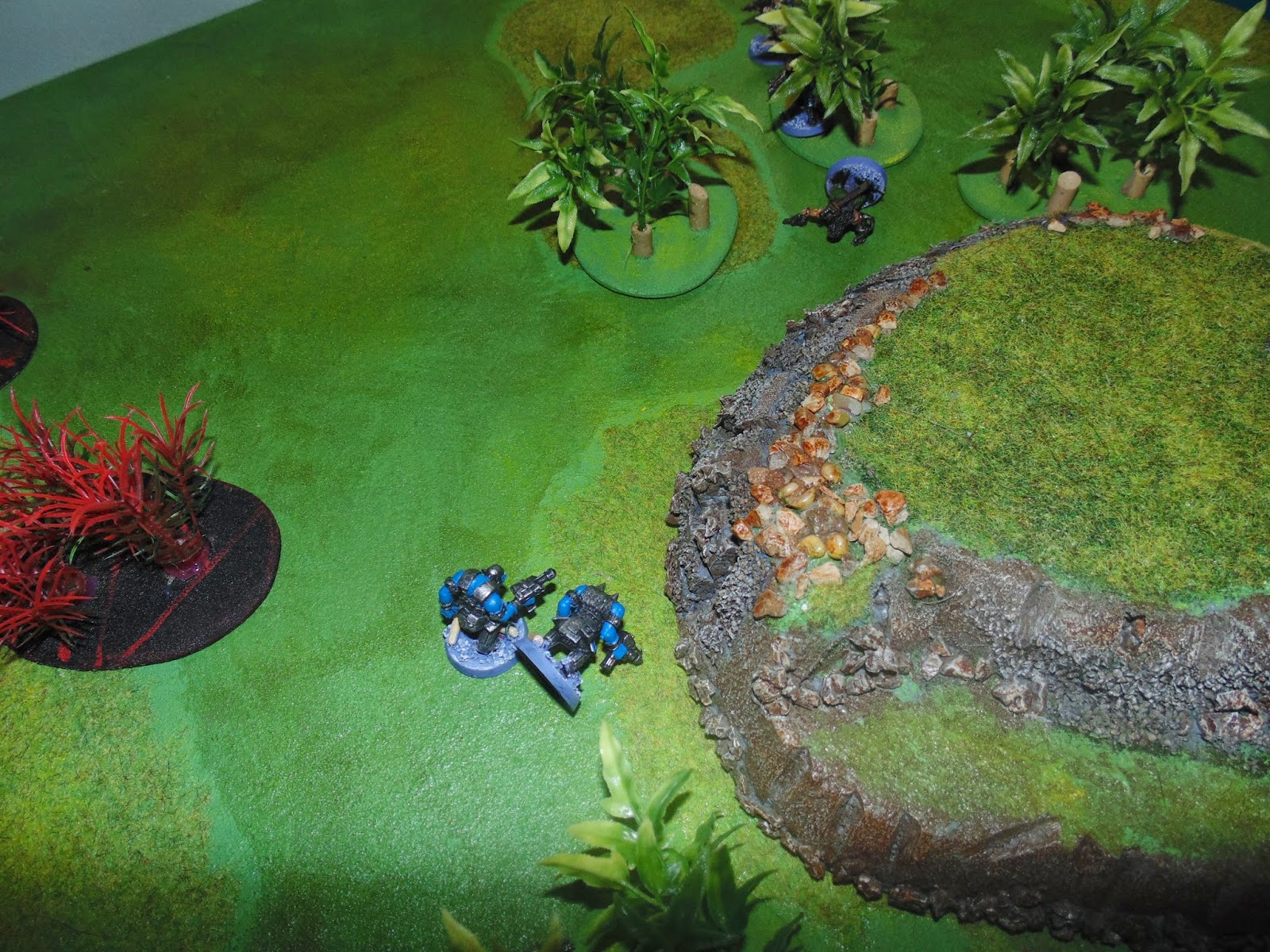 A pirate rushes forward to see if his companion is still alive, and guns down Kassel, severely injuring him for the next 6 campaign turns! 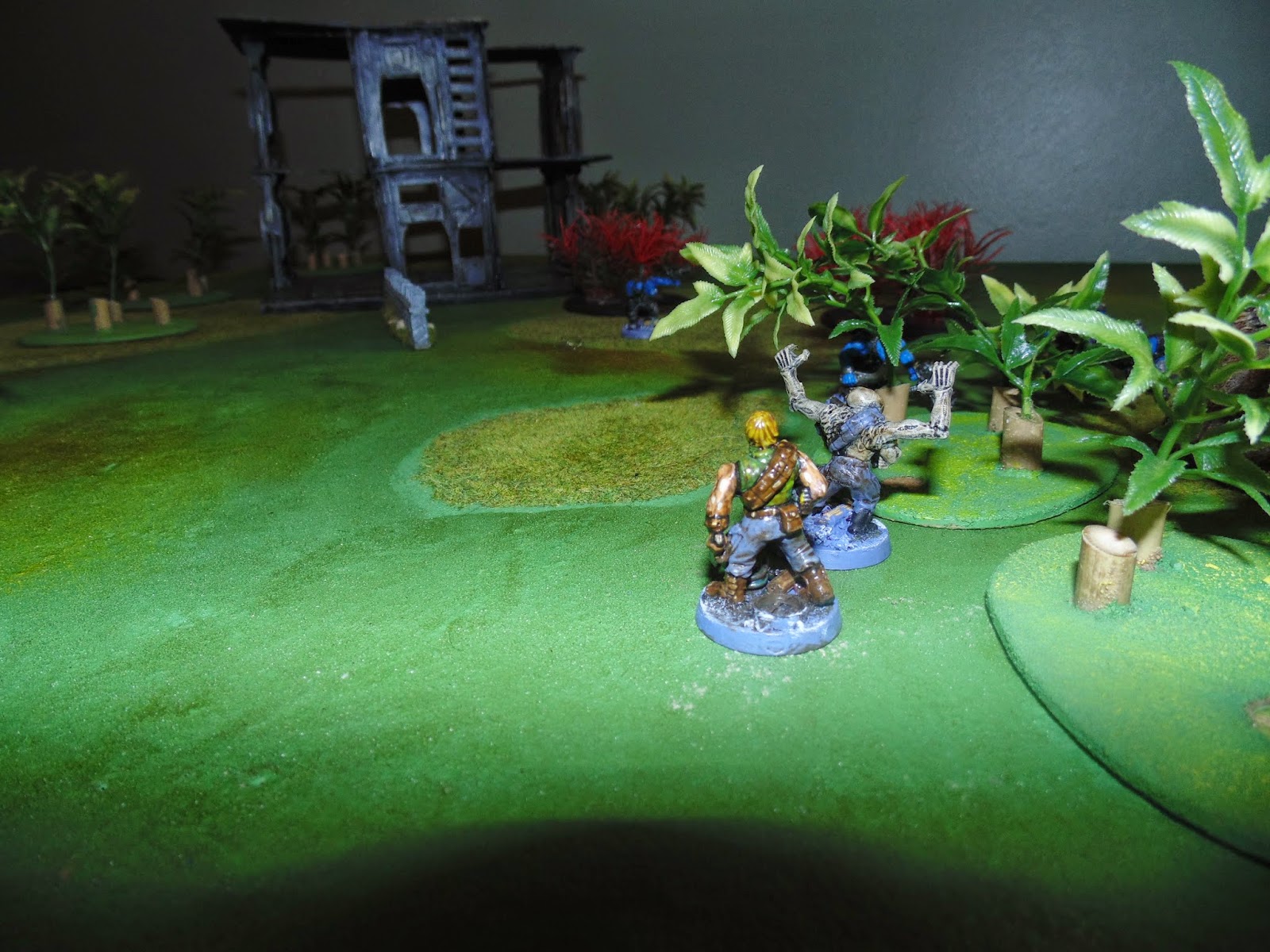 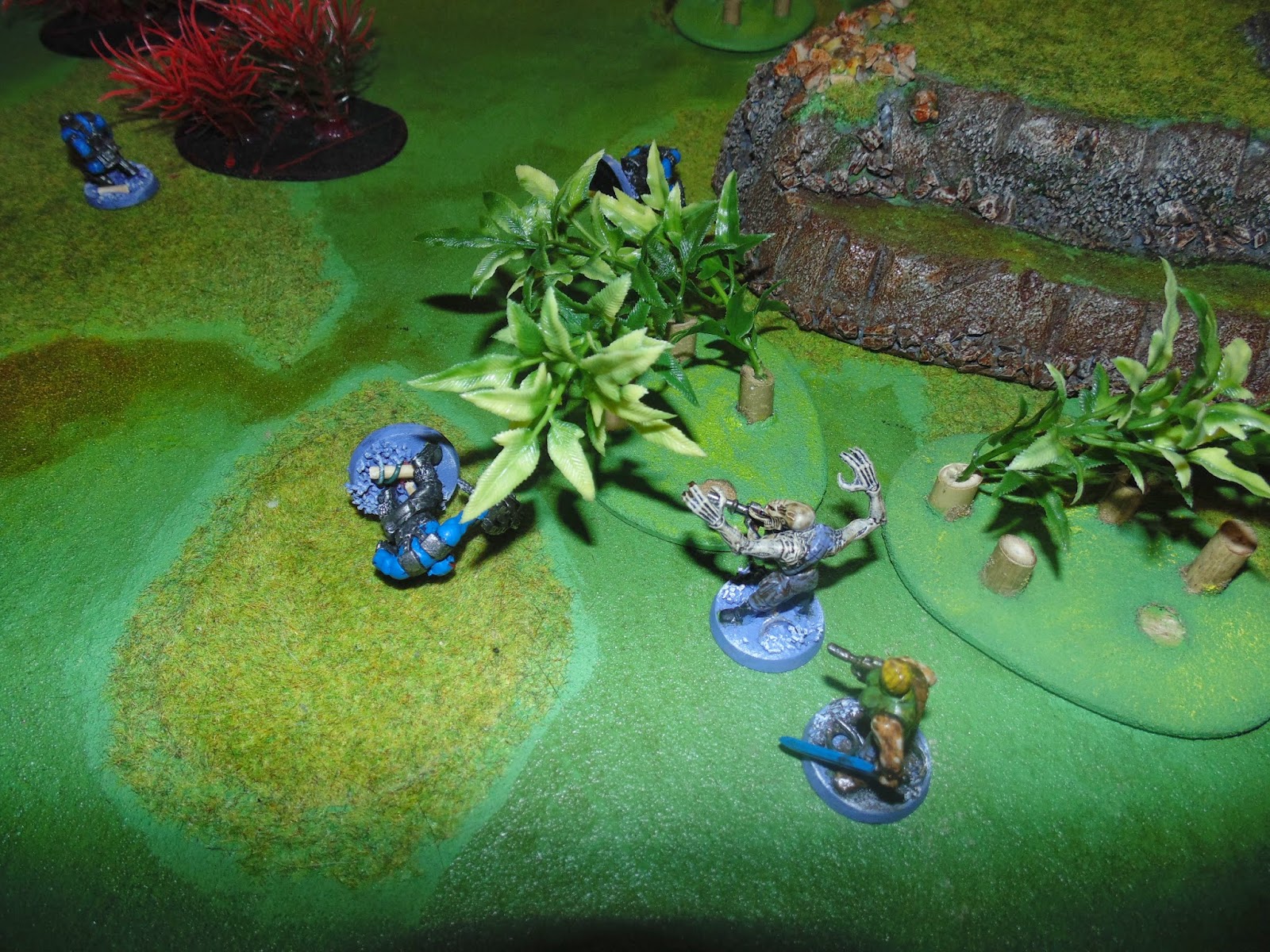 The pirates throw a fire fight event, but Kratoom uses his manipulation Psi power to draw the nearest pirate into the line of fire to protect Junke. All the thenpirates miss their shots. 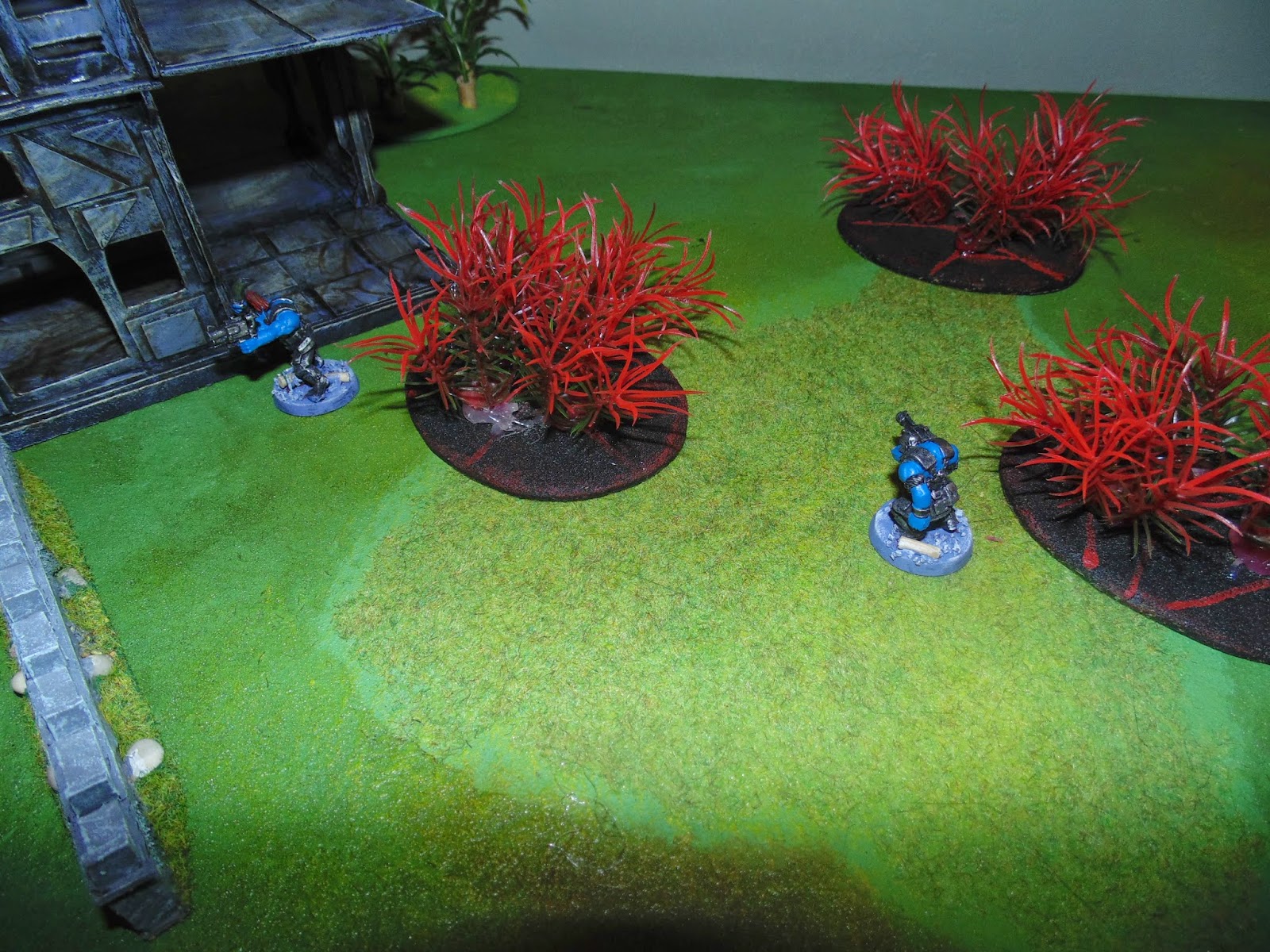 While the crew, particularly Junke and Kratoom causing the last two to Bail. 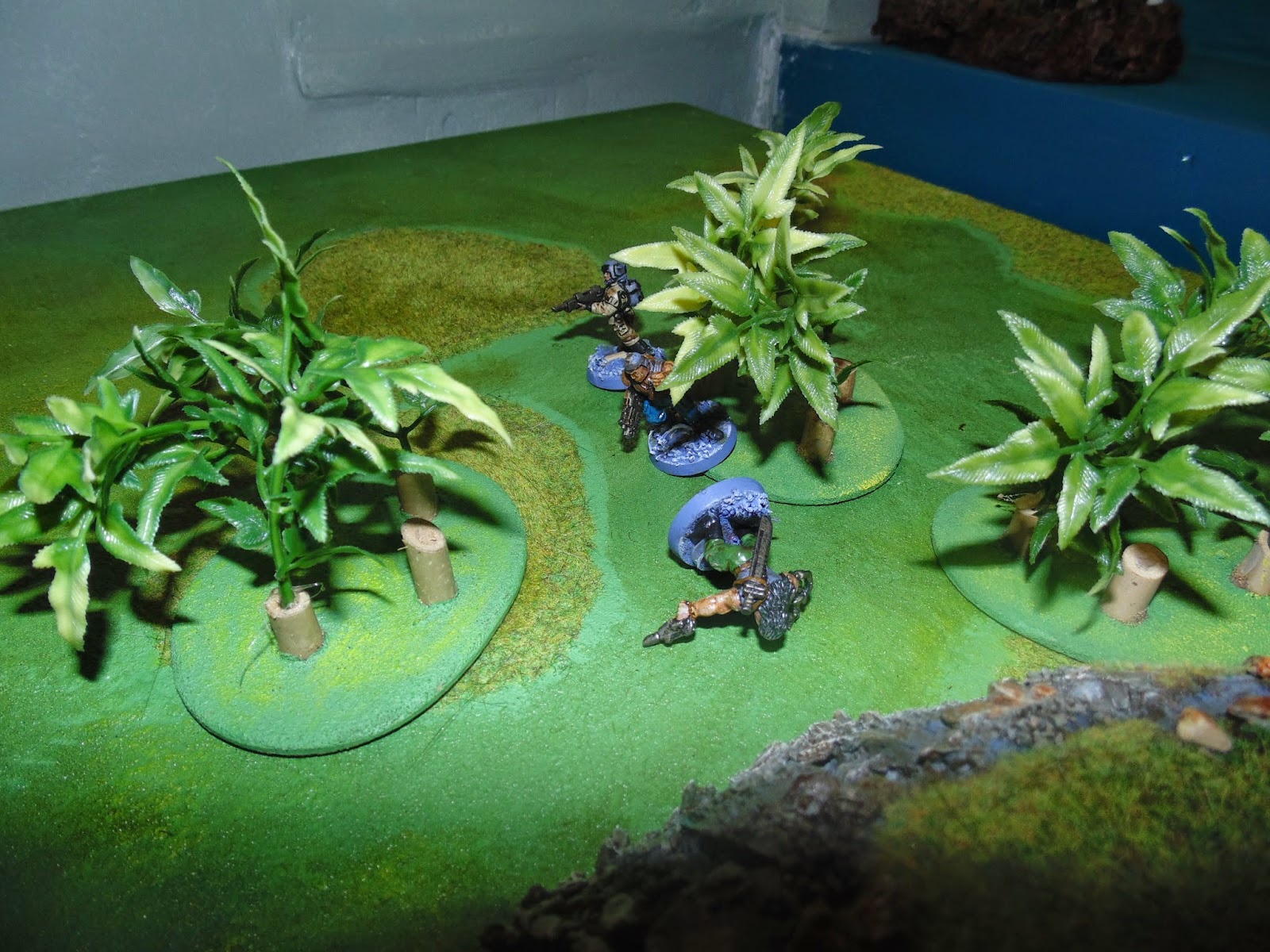 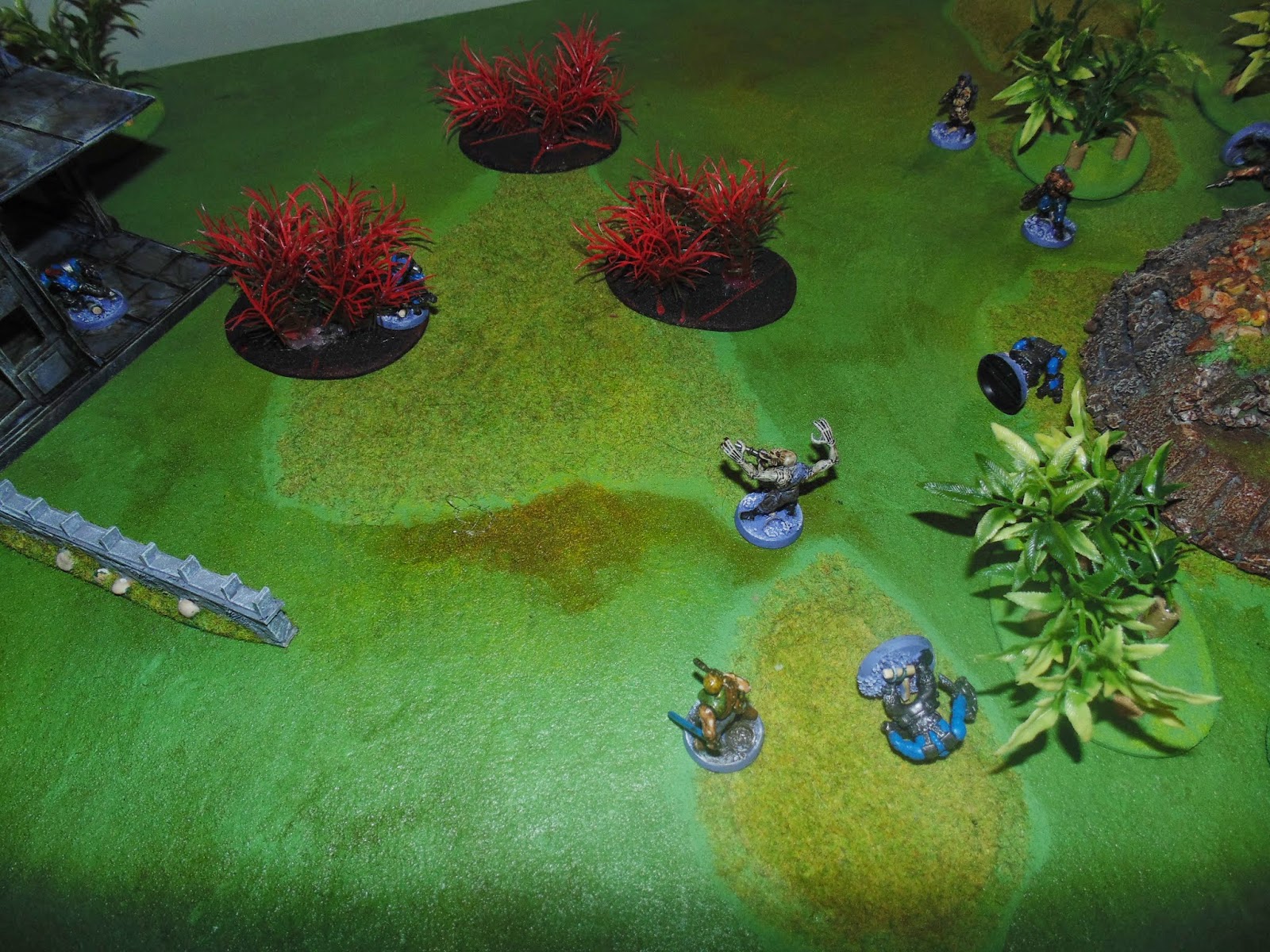 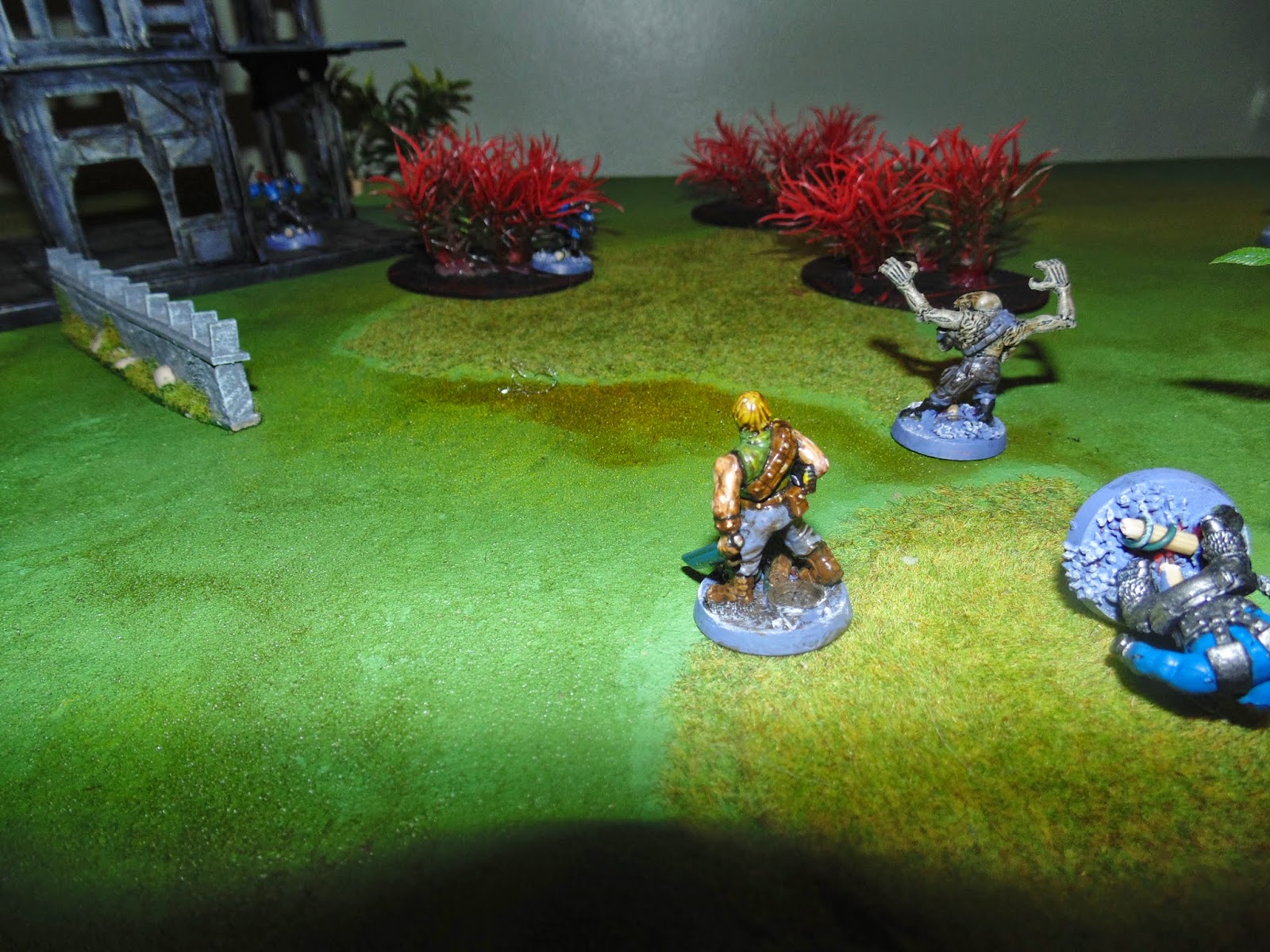 The crew follow up, they need to drive the Pirates off. 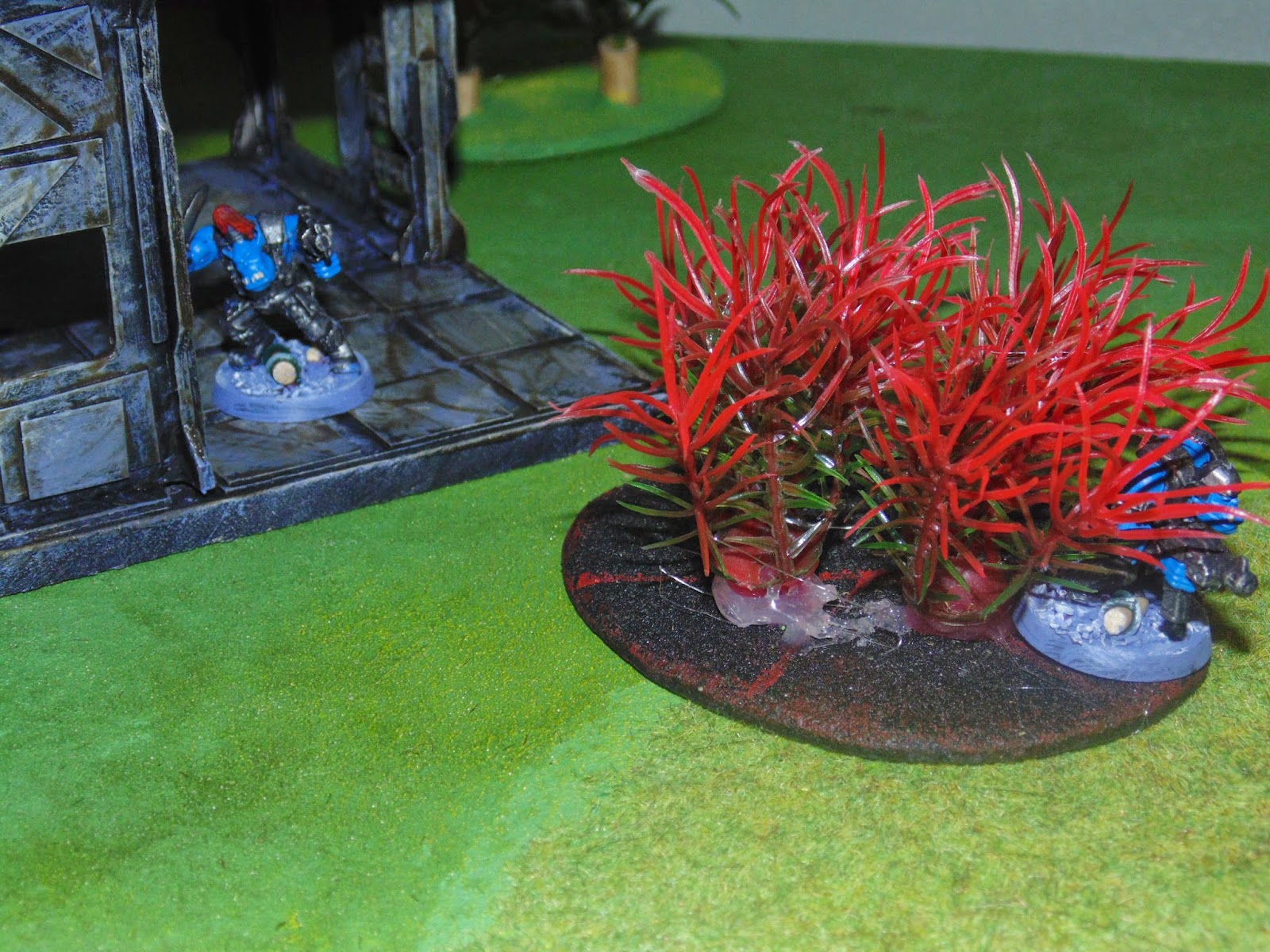 The Pirates hide in the building. 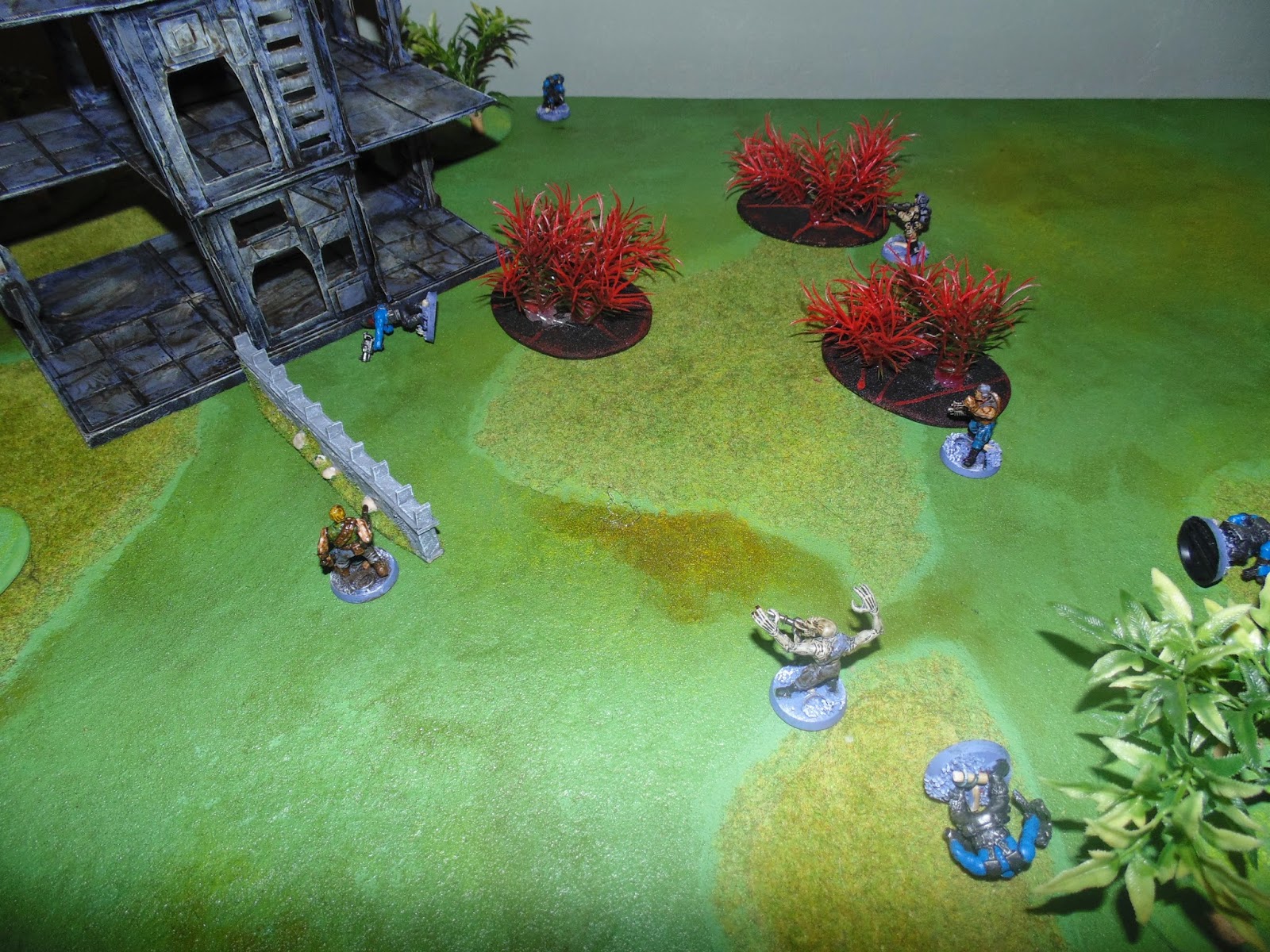 Kratoom guns one pirate down and Junke forces the other to bail. 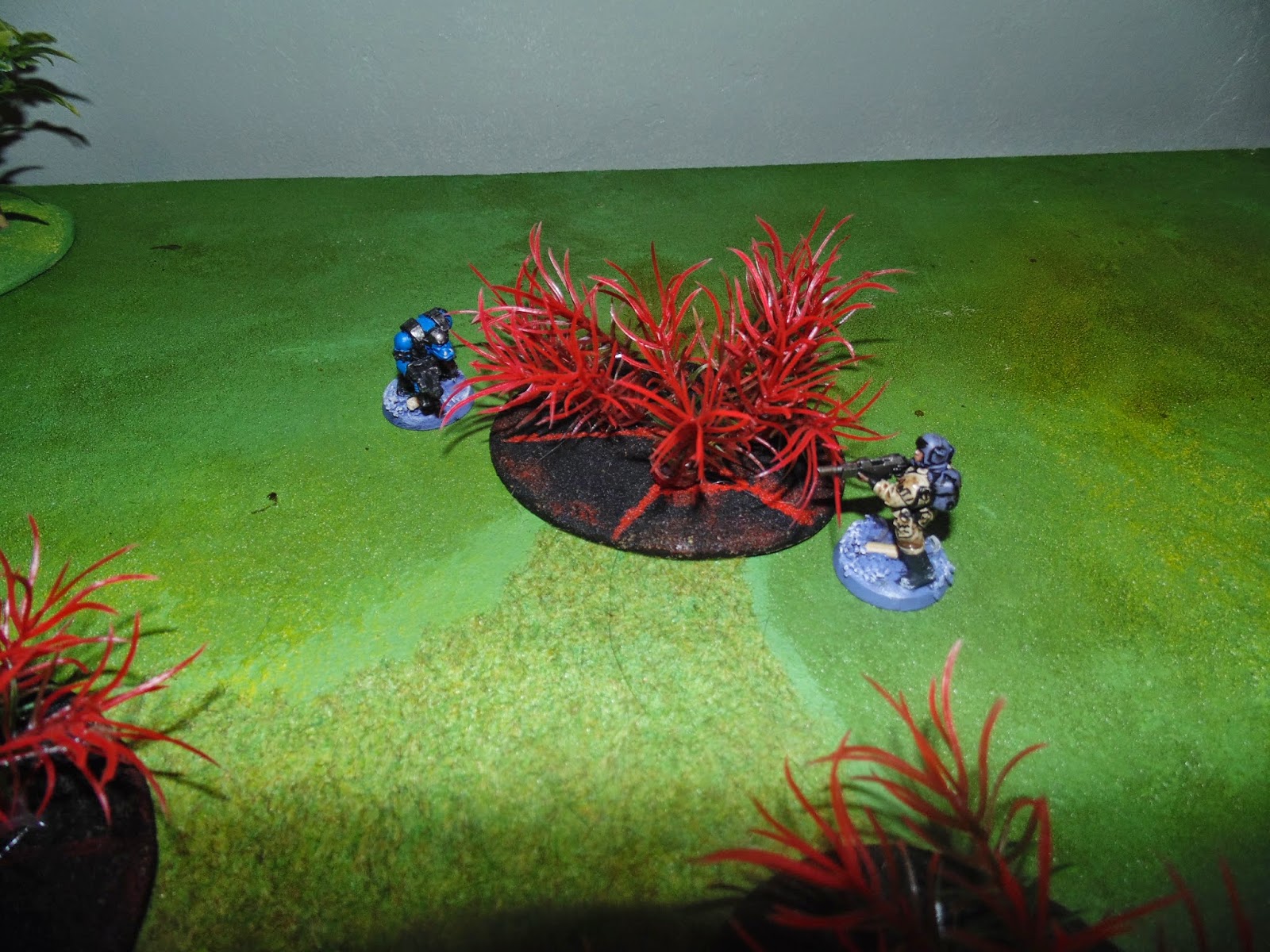 But the last pirate is not giving up easily, he recovers his nerve. Turns and causes Jazz to bail across the table. 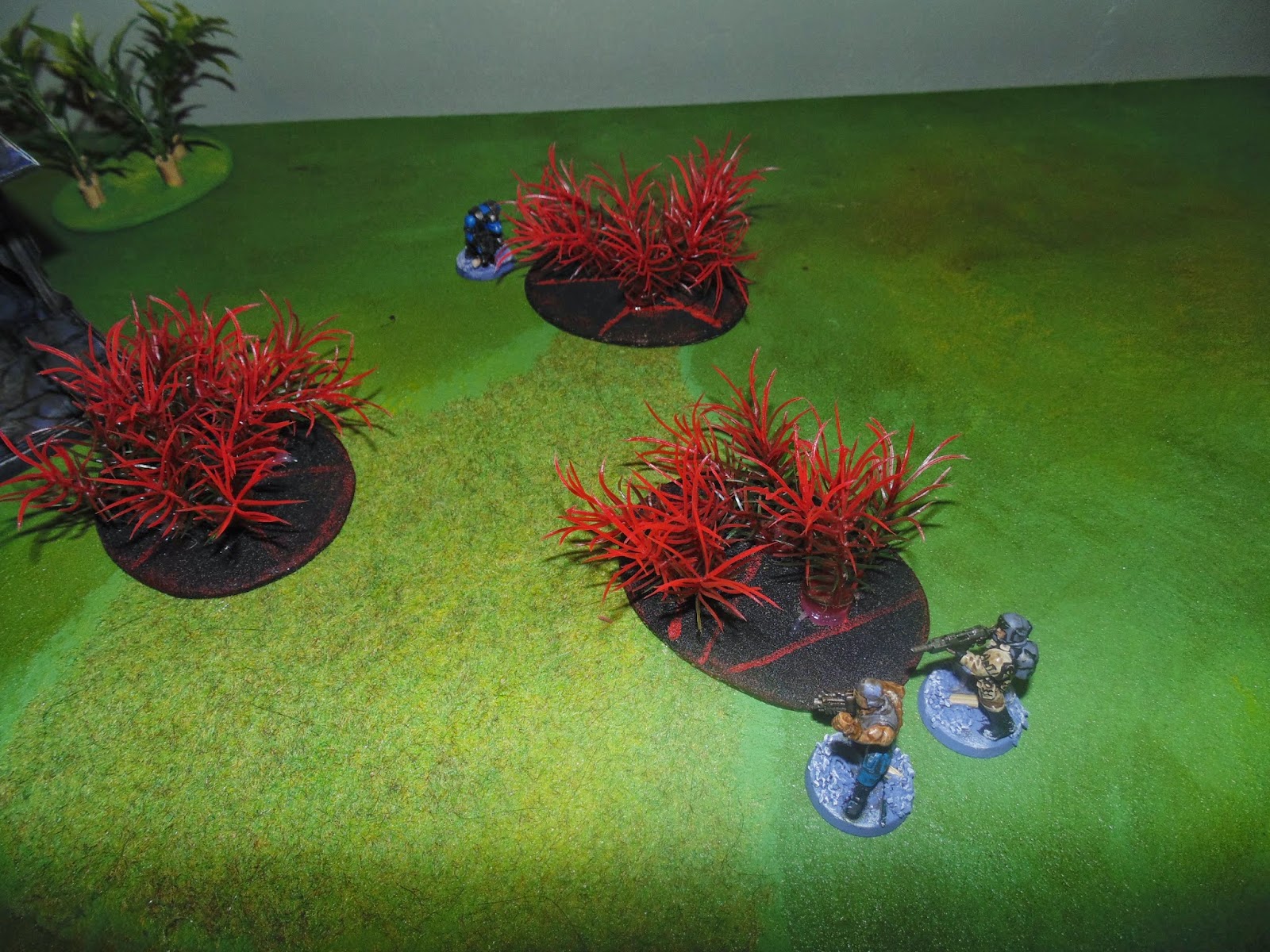 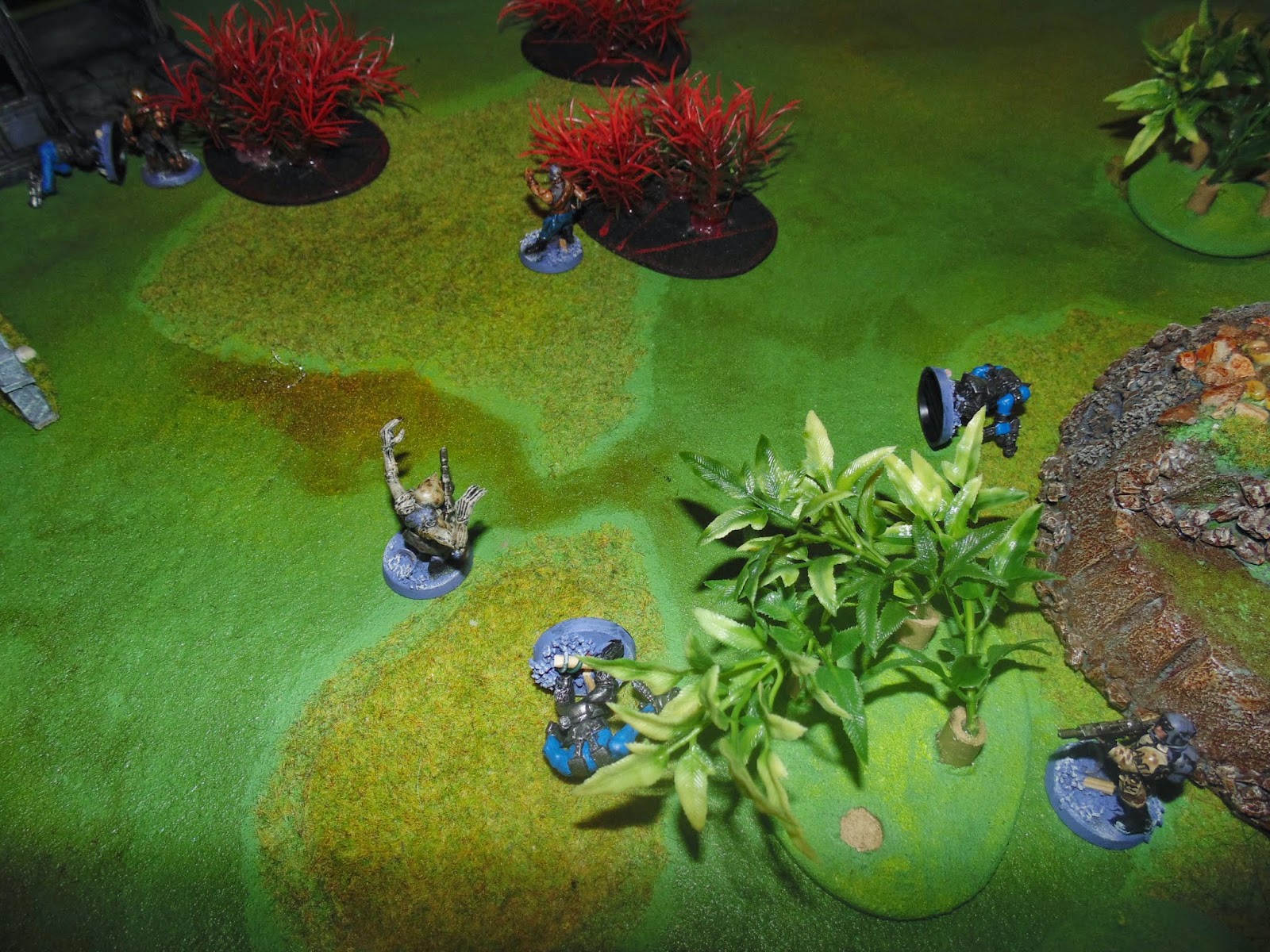 Junke, Kratoom and Vassily all shoot at the last poor Pirate who bails right off the table. 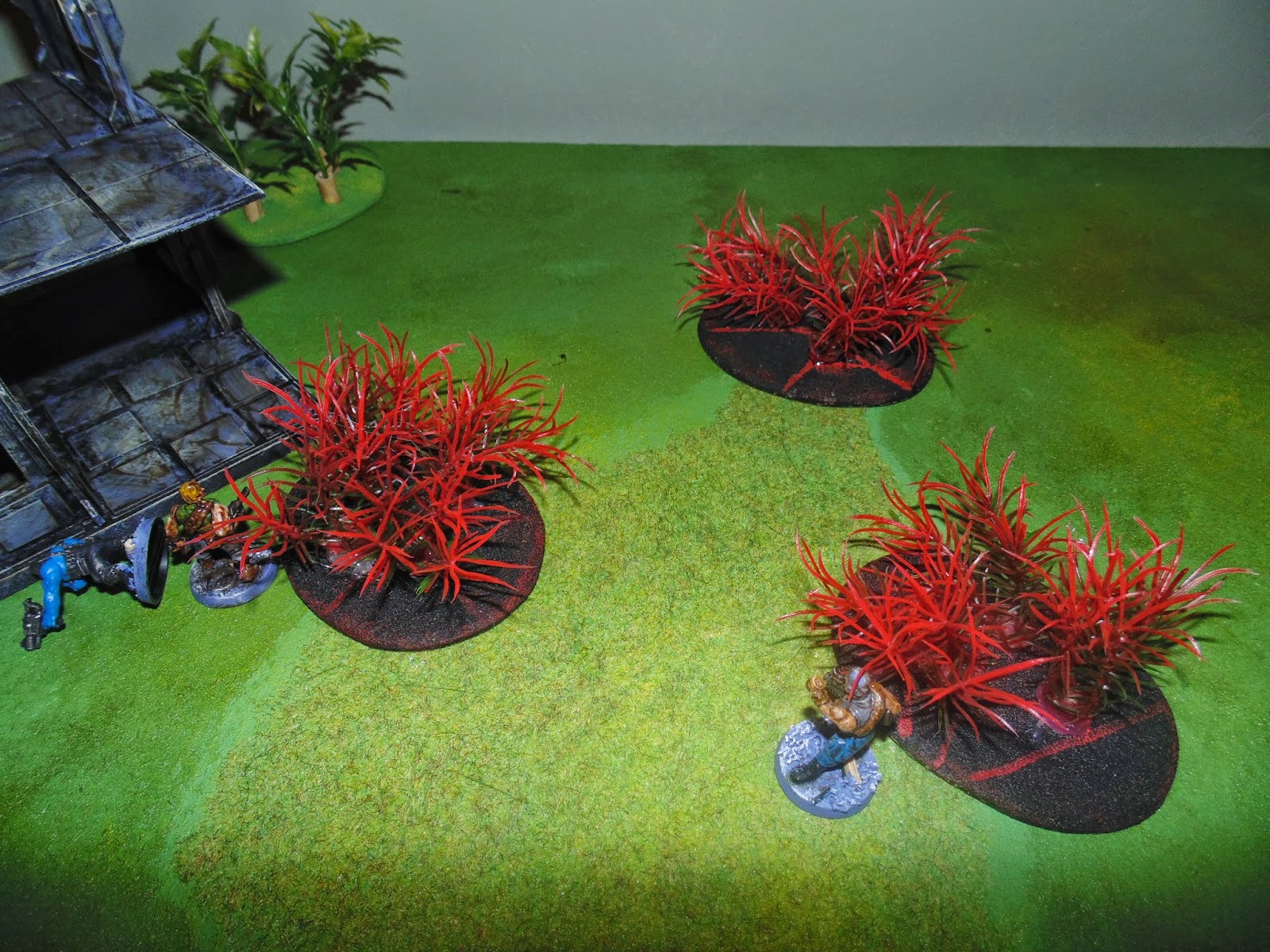 The crew burn the crops, pick up Kassel and take him back to their med-lab aboard the Sulimann. 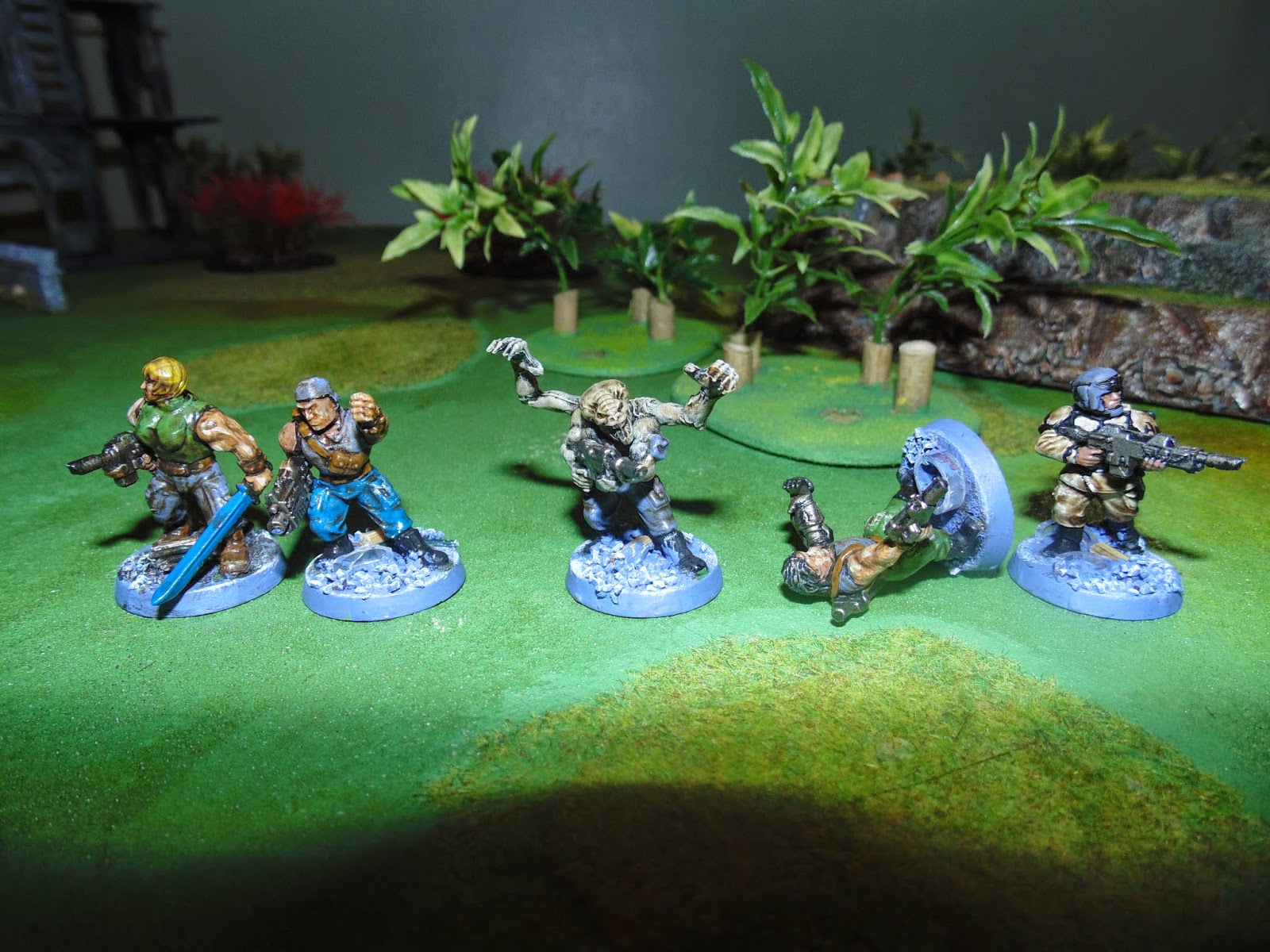 Kassel will miss the next 6 campaign turns, a thorough nuisance. Even after the fitting of bionic Parts from Looting the farm, so Kassel has a "Knack for Repairs" which will be great when he can walk again.
In trade the crew managed to come across some scrap, they have a duplicator so maybe they can manufacture something to help Kassel. I will look up the rules on duplicators.
The duplicator has just spewed forth another dazzle grenade, so no, is the answer to my query above