Played at Micks place last night, 2000 pts of Dark Elves against Skaven. As you will see a very difficult game for the Dark Elves and a very well fought game by Mick with his Skaven.

I played with the same list almost as last time: 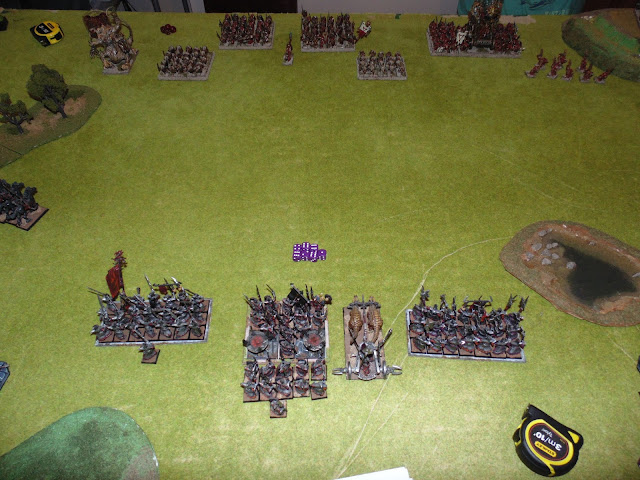 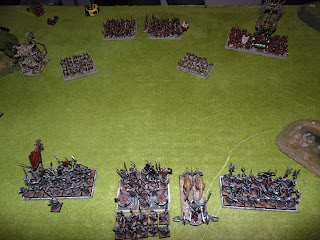 Deployment, after the warlocks and Dark Riders had vanguard moved. The rest of the dark elves moved forward, the Warlocks and Riders on the Left tried to avoid the Hellpit, failed to cast magic at it or shoot it. The bolt thrower on the left also fired and hit the Hellpit but failed to wound.
The bolt thrower on the right killed  couple of globadiers. 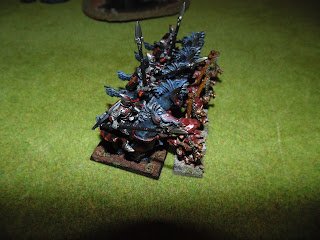 The Dark Riders on the right Flank got too close to the Globadiers and were wiped out. 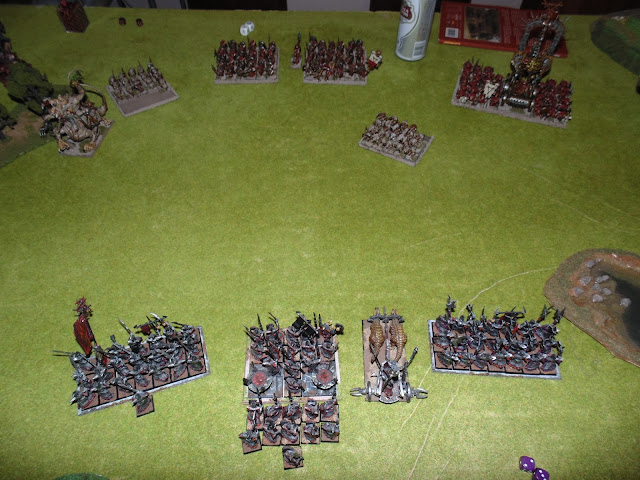 The Skaven moved forward and I thought that the Hellpit was in line to run into the Executioners, which suited me as they had the banner of Eternal Flame. 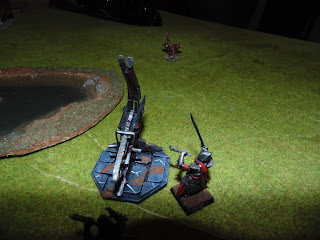 The right hand bolt thrower shot 2 of the Globadiers. 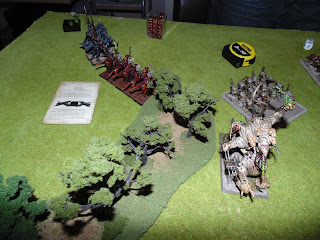 My Warlocks and Riders crept round the rear of the Skaven army. 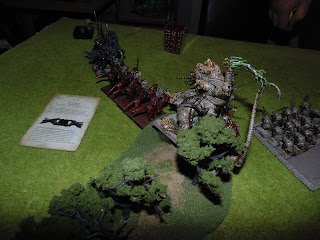 Not carefully enough really as the Hellpit turned round and charged them, passing its dangerous terrain test. Oops! 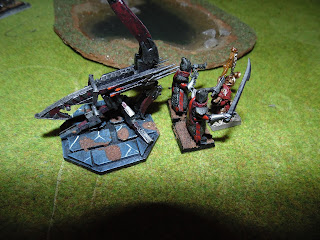 The last Globadier killed himself as Mick predicted he would. 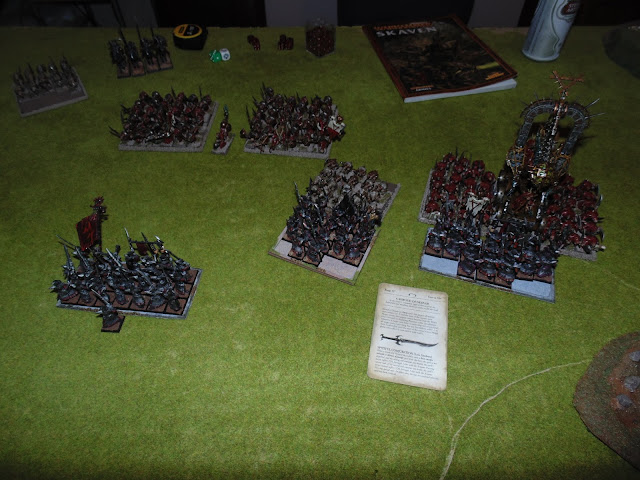 Feeling some what like I had no real choice in the matter I charged into the Plague Monks, hoping to kill a load and avoid the effects of the charging furnace.
The Dreadspears charged the unit of Slaves hoping to kill enough to follow up, I know I don't play games enough to remember Slaves just run in all directions, Doh!
Also you'll notice that the Dreadspears are some what depleted, that's because the Grey Seer had chain lightening'd them, then the Warp Lightening Cannon had hit them killing 13 in total.
Also the Cold one Chariot is missing because the Warp L cannon clipped it after it hit the Dreadspears. 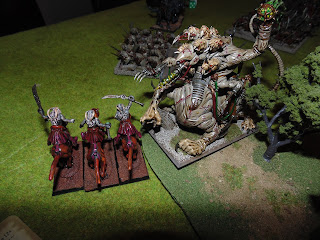 Didn't think the Hellpit would turn and attack the Warlocks but it did, killing 2 first turn for 1 wound in return. The Warlocks passed their leadership. 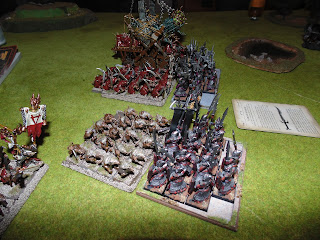 In the centre my turn went from bad to worse, the Slaves lost combat and scattered doing a few wounds to everyone, but I was left stranded in the middle with the Dreadspears.
I managed to cast Doom and Despair to restrict the leadership of the Skaven, but when you manage to kill all the Black Guard in the turn they charge, its not generally a problem. 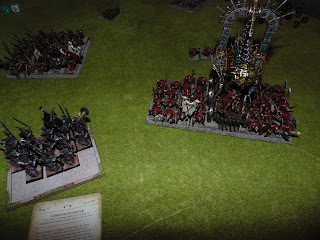 The hole that was, the Black Guard! 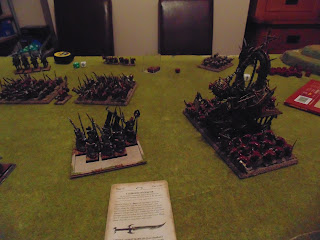 This was in my turn, the Monks turn to face the Dreadspears, their quarry for their next turn.
Over on the left the Hellpit was taking its time to kill the Warlocks, while the second Slave unit, also on the left, fled due to shooting and magic. 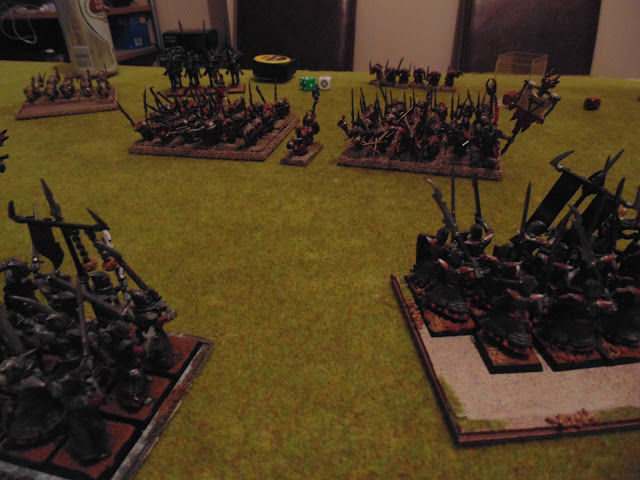 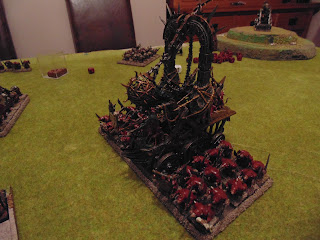 We all waited in anticipation for the horror that was to come. 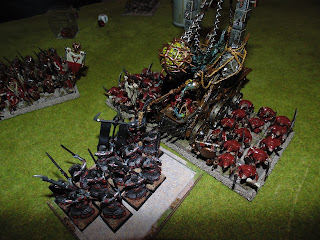 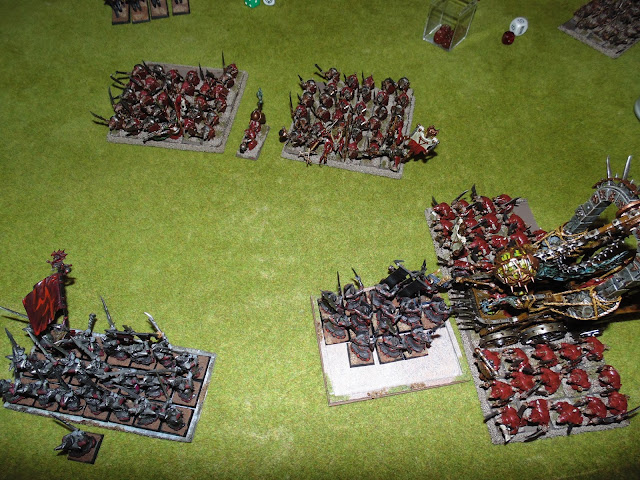 By my calculations Mick would have charged all his units into combat but it was not to be. The Monks would be more than a match for the Deadspears and my Executioners were subjected to THE DREADED THIRTEENTH, they were all, to an elf, turned into Clan Rats. 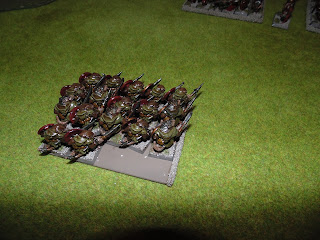 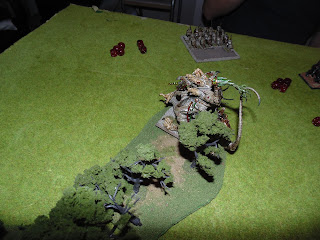 With the Hellpit finishing the Warlocks, which actually turned out to be a pretty good use for them really, (especially if I could have run the Executioners in as well!) 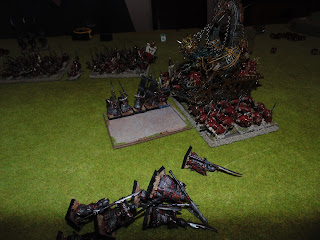 And the Dreadspears, being well and truly munched through by the Furnace and Monks... 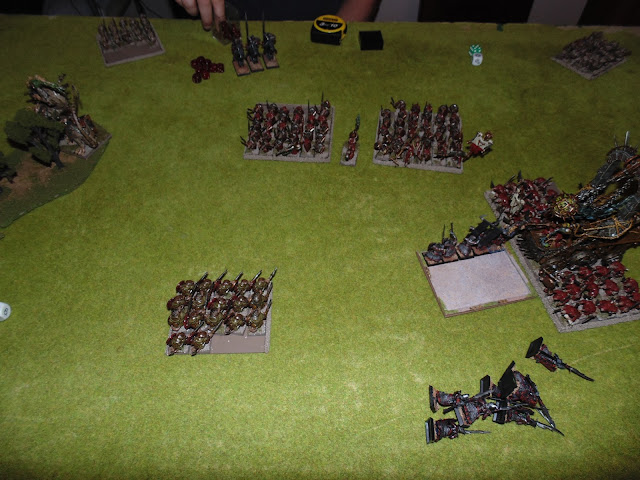 Signified the end of the game.

What did I learn:
I should have deployed over to one flank to make either his Hellpit have to come a long way round or the Monks do likewise.
I should have concentrated my magic and shooting on the Monks and totally ignored the Slaves.
I should have been more careful when moving forward in vanguard so that I could have got to the Warp L Cannon.
I should have remembered that Hellpits can charge in any direction!!!!

A lot of "Should Haves".
Hope this is generally right, if not please let me know Mick and thanks for the game.