Played my first game of the year last night over at the gaming club Wakefield Warriors, 2000 points.
A very enjoyable game which I lost but which had some interesting tactical moments.

This will be a more tactical commentary as opposed to a recount of the battle. 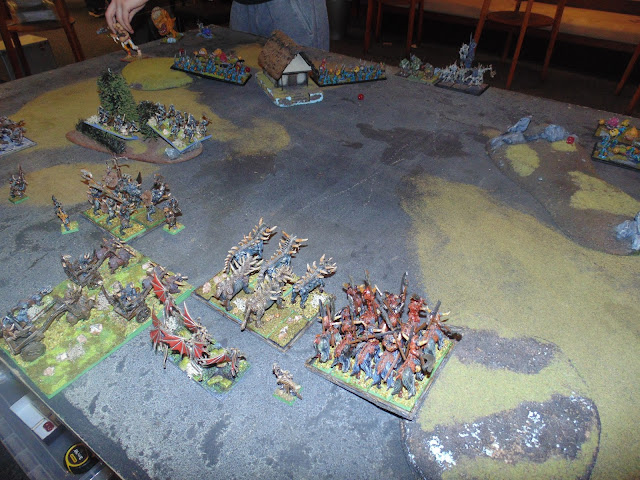 Lee, my opponent took an allied force of 2 units of Ogre Heavy Crossbows. These can be lethal, they took out my new unit of chariots in the first turn. One unit needed 5+ to hit the other 4+, each had 18 shots- piercing 2. 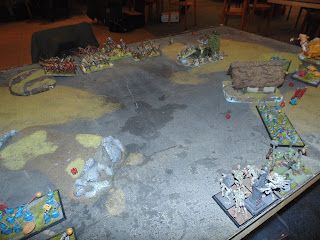 They are at the back of the board, well away from any combat. They're first blood and the subsequent destruction of the Stampede on turn three really coloured the game and really changed my tactics. 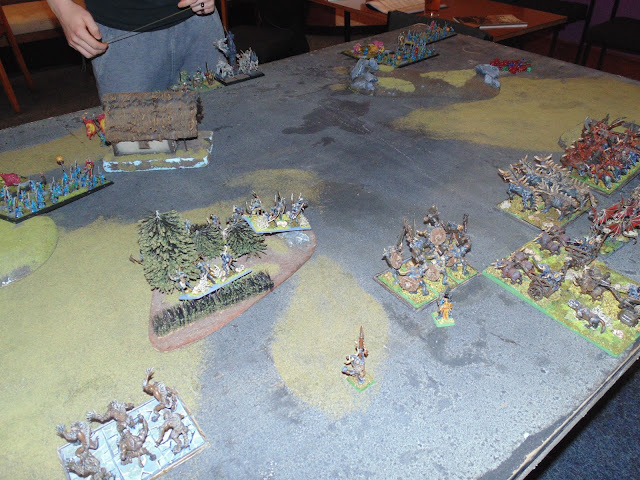 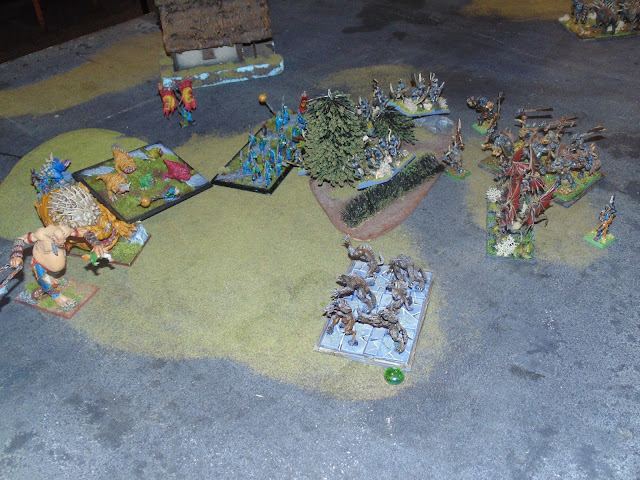 I moved most of troops over to the left flank, while I lost the right flank completely. The poor Centaurs need support or a flank charge to win combats, they had neither. 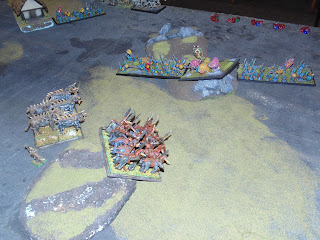 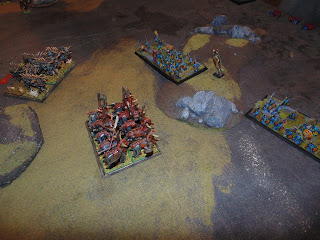 Centaurs had to withdraw 3" in order to avoid a flank charge from the second goblin horde. As it was it made no difference. 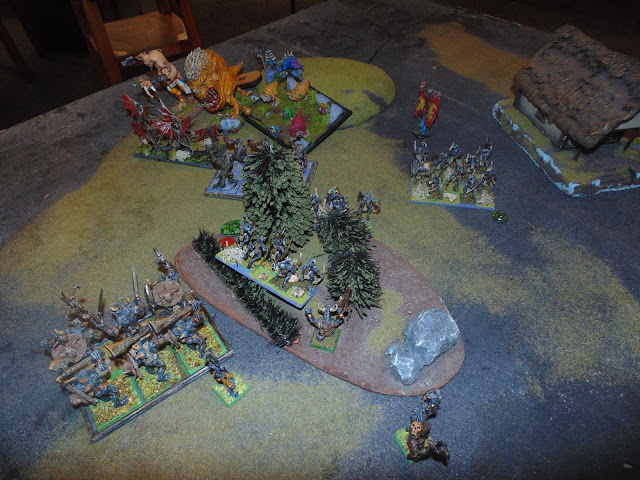 The other thing I learned from the game was that I really need to make sure I do magic and shooting in an order which helps my troops, on 3 occasions I missed the chance to augment the abilities of my troops. 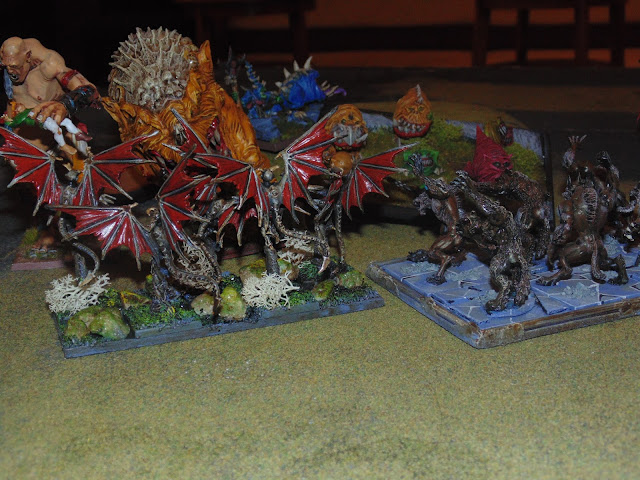 So most of the combat focused on the left flank and that went OK for me and kept me away from the Ogre shooters. 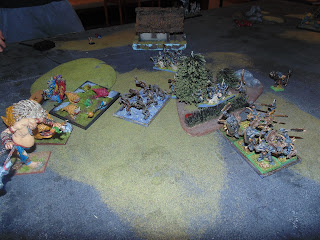 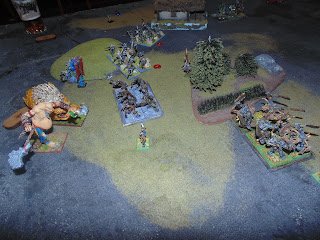 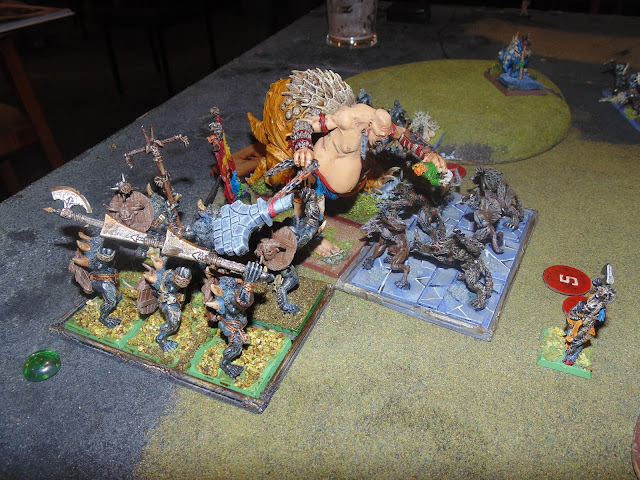 Eventually I managed to wipe out the Goblins, slasher and Giant, all good stuff.
However I wonder if really I should have charged forward towards the shooters and taken the fight to them. If you look at deployment at the start you'd see Lee had very cleverly set up a goblin trap for me if I had. So alternatively I think I should have skewed my deployment over to the left flank, so I only had a token force on the right. 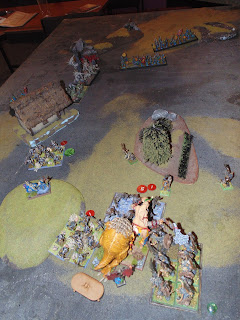 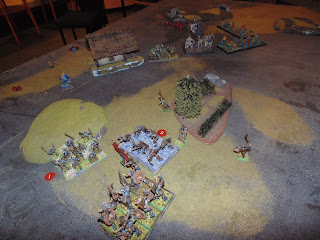 Next time we play I will be watching for his Ogres and deploying as far from their field of fire as possible. And when I come to creating my Ogre army, I may well use this combination as it is so effective.

Well played to Lee, a good game with lots to think about. 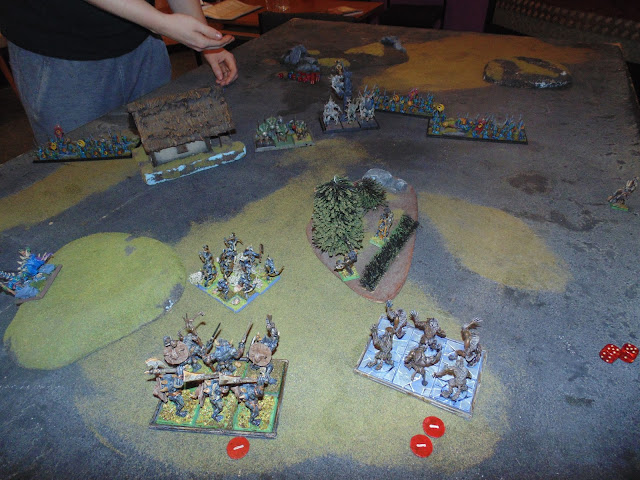